Skip to content
Charlotte Samuels On Achieving The Triple Crown 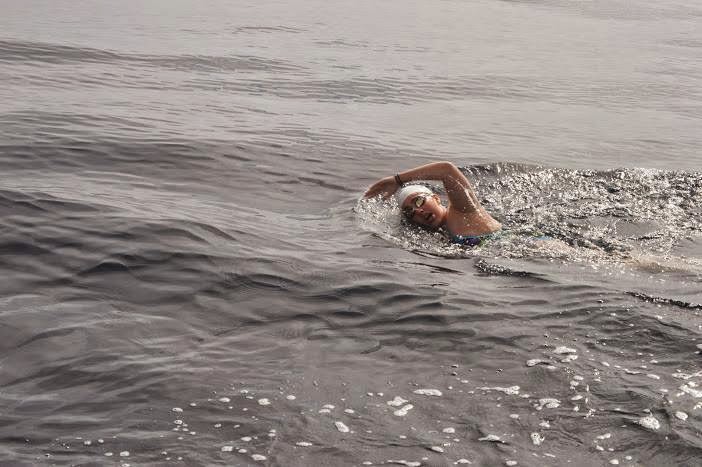 Daughter of Steven and Suzanne Samuels, Charlotte Samuels defied all odds when she overcame strong winds and tidal flows on September 8th 2014 to become the youngest swimmer in history to achieve the Triple Crown of Open Water Swimming. With a focused and knowledgeable support crew including her parents and channel swimmers Tracy Clark as a crewmember and Roger Finch as her support swimmer.

Mackenzie Miller: So Charlotte, you have just become the record holder as youngest swimmer for the Triple Crown of Open Water Swimming. How does it feel?

Charlotte Samuels: Unreal. I believe in myself. I never thought it would all work out so perfectly. Manhattan [Island Marathon Swim] and Catalina are planned out when you get there. England is a complete surprise. We had no idea because of the weather. The first week we were here, there was a huge storm and no one went out. Some hurricane passed over an area near here and created an Indian summer. It’s when the hottest part of summer is over, and goes away and then it comes back. It increased the water temperature to 18ºC, 68ºF. The first couple days we were here, I was scared because it was so cold, and tired from traveling, and it took a lot out of me with the time change from here and New York and we had just flown in from California so it was like an eight-hour time difference. So I talked to friend in Mexico, Mariel Hawley Dávila, who also did the Channel, and she said that no one tells you how hard it is once you get there. And they really should tell you because people do get freaked out and go home before they have a chance because they think they can’t do it.

But you also don’t want to remember a lot of it. I hate swimming at night. I started at 6 pm. There were really big swells at night. Otto [Thaning], the oldest person to do the English Channel, did his swim the day before me and had perfect conditions. Once I get out there, it’s huge swells, and I kept switching sides of boat during channel because of the winds and waves.

My Mom told me that if I didn’t want to do it that we could go home at any time. We were talking about how hard it is to see one of your own children in the water. The wind picked up and the currents were really bad. Towards the end, the boat captain told everybody to put everything down and aside from filming and taking pictures, to go to the side of the boat and cheer me on because I needed all the encouragement I could get. My parents are really supportive.

Mackenzie Miller: So how are you wrapping your head around all of this?

Charlotte Samuels: I’m still trying to process it. We’ve been spending a lot of time together in the past couple weeks: family and crew. Tracy Clark, one of my crew members said, “It’s raw, and once you process it, everything changes, so we need to savor the moment.” In a month, we are going to write our experiences down and share with each other with pictures.

Mackenzie Miller: You’re 16, in high school, school has started, and you’re in England, attempting to swim across one of the world’s busiest shipping channels. How are you keeping up with school work?

Charlotte Samuels: I talked to a lot of teachers. I have really good teachers. I’m in a medical program in a small school called RAHP. It’s like a group of 40 people and we’re split into two groups. All my friends are helping me out. I don’t get physics right now; my teacher doesn’t make any sense. My math teacher is so nice. She actually tracked my swim during class and was showing everyone. My brother’s Latin teacher, a teacher I don’t even know, was tracking my swim during class. It’s a really good community. I’m really lucky, it’s such a good school.

Mackenzie Miller: While in England, you’re here with your parents. Did you have any friends join you on this adventure?

Charlotte Samuels: My friend Roger Finch, he’s from South Africa. We met at Ederle Swim last year. He’s such an amazing swimmer. He did a swim in False Bay, but couldn’t finish it because you can’t swim at night. It was on Shark Week because it has so many sharks. He messaged me on Facebook saying he was already planning on being there in the exact same time frame they were there, because he was on Otto [Thaning]’s swim, who did the swim the day before me and he now has the record for the oldest man to swim the channel. Roger also invited his friend Tracy Clark from Holland to come down, and was supposed to leave the day of my swim, but she called her husband to ask if she could stay for my swim. Otto was there the night we left and he was there the night we got back. He carried everything for me and wouldn’t let me carry anything. And he’s like a heart surgeon so he was checking my pulse. Such a sweet guy. I’ve just met so many amazing people. Tracy, Otto and Roger and just amazing people. We took a lot of day trips in England seeing a bunch of cool things. I never guessed I would be this lucky.

Mackenzie Miller: Did you have any sponsors for England?

Charlotte Samuels: My friend Grace van der Byl asked CarboPro, but I can’t get a sponsorship. But my parents are like “No, we’re willing to pay for it so you can have a chance to swim it,” but I’m so happy I did it because we don’t have to come back because it’s not for just a couple days, it’s for like 3 weeks.

Mackenzie Miller: While in England awaiting your window, where did you and your family/friends stay: a flat or a hotel?

Charlotte Samuels: A cottage, in St. Margaret’s Bay, it’s actually closer to France than Dover. It’s a quiet sleepy town, and only five minutes from Dover.

Mackenzie Miller: What was your favorite thing to do to pass time awaiting your attempt? Did you check out Dover Castle?

Charlotte Samuels: Going to Dover tomorrow. We’ve been to lots of little towns. Places like Rye, Deal, Folkstone, we’ve done a bunch of day trips. And a lot of times we just hang out around Dover and spend time with each other. Roger leaves late on Friday, so we are going to do London tomorrow or Friday.

Mackenzie Miller: What is your favorite food to eat in Dover?

Charlotte Samuels: Oh my gosh. You’re going to think this is really weird. There are these seafood vendors, and they have prawns and this really good sauce. And we went to Folkstone and Roger was like “You had a really good training swim. I’m going to buy you these prawns,” and he bought this huge thing of prawns. There’s a lot of good seafood there.

Mackenzie Miller: What about during your channel swims?

Charlotte Samuels: I did not eat any solid foods during swim. I had CarboPro the entire time. Right before my second-to-last feed, I had this gross energy shake, and I couldn’t eat it. Then there are these weird candy things, I had like 1, and the rest fell to the bottom of the channel so I never saw those things again. I had so much trouble with medicine on this swim because it kept falling out before I could get it. I actually started taking medicine like two hours into swim. I was, like, very tense before swim started because I was cold and we were applying stuff before the swim on the boat. I usually have neck pain, but not this swim.

Mackenzie Miller: Any tips to any young swimmers out there who want to do something like this or in general?

Charlotte Samuels: In general? From experience, I never had records, never had amazing events at meets. Let people into your life to see what you really want to do. I asked to do my first 500 at 8 years old, and I was put in an event with 15-year-olds. It’s important to have communication with people who can help you. It’s really cheesy but, it’s important believe in yourself.

Mackenzie Miller: What got you into this ultimately?

Charlotte Samuels: What got me into it really was a really good experience with the Ederle Swim. But a swim called the Cape May Navigation challenge, a short swim, took me about 4 hours, was a big confidence booster. I started open water swimming at 12, but I started with short distances like a mile. A few years later, I did a 10-mile swim at 14, and I ate things like bananas and Gatorade, but no one told me and I look back on it like what was I thinking? When I got into the open water swimming community, I saw what kind of power I have for myself. I trained all by myself. I didn’t get it from anywhere else. I found it deep down inside. Manhattan [Island Marathon Swim] was the easiest swim of the three. I love that swim cause you can see something the whole time.

Mackenzie Miller: And the future?

Charlotte Samuels: The Strait of Gibraltar between Morocco and Spain, and Lake Zurich in Switzerland is something to aspire to try.