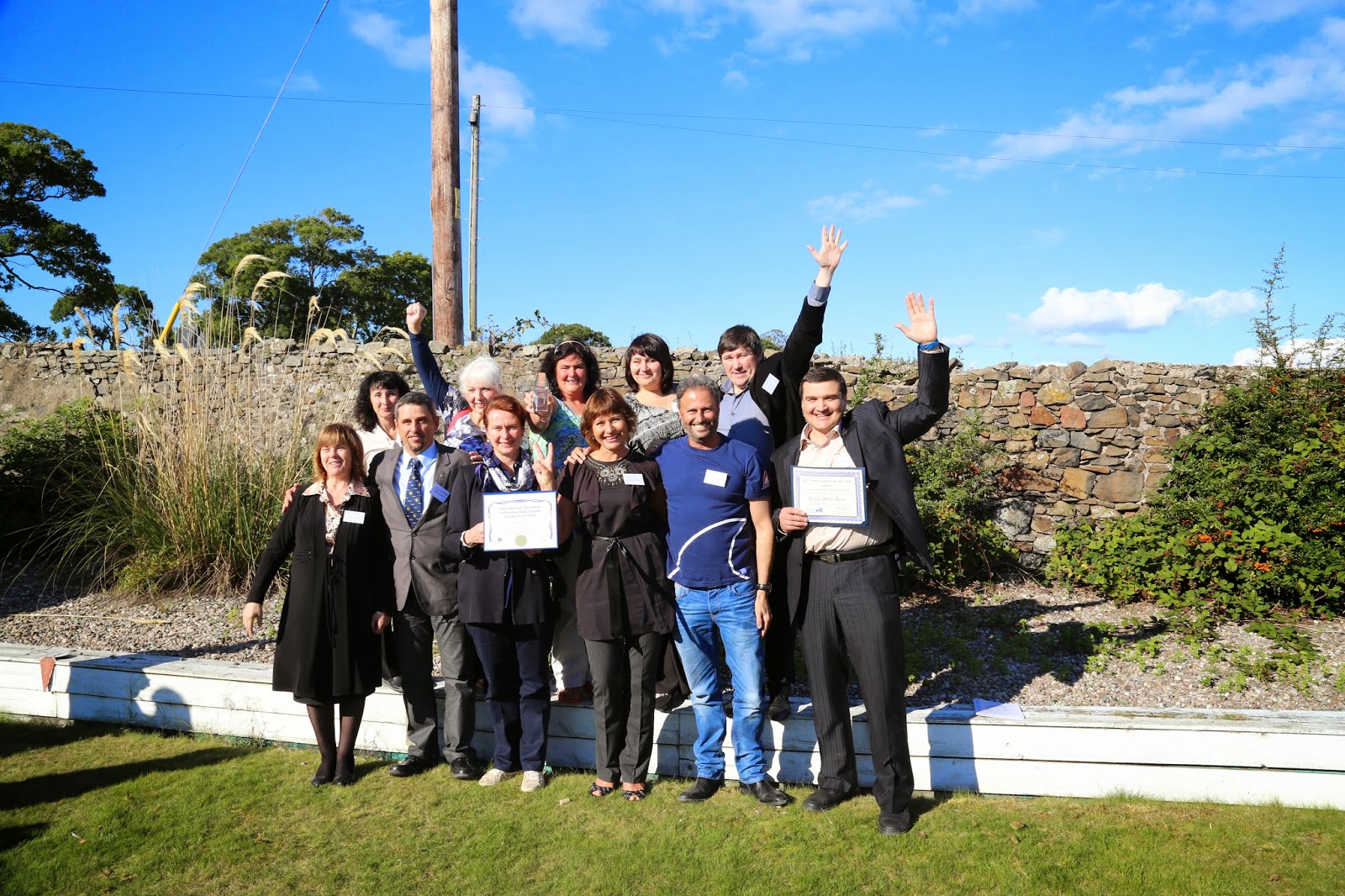 38-year-old Alexandr Brylin and 45-year-old Grigorii Prokopchuk swam between the Diomede Islands on August 1st 2014 from Little Diomede in the USA to Big Diomede (or Ratmanova Island) in Russia.

As part of the program ‘Arctic: The Present and The Future’, the two Russian ice swimmers swam across the international dateline between the Pacific and Arctic Oceans as Lynne Cox has first pioneered in 1987. The swim was sponsored by a South African charity organization.

Due to some current drift, the ultimate distance of the swim was 5,600 meters as Georgia finished in 1 hour 57 minutes and Brylin finished in 2 hours 7 minutes doing breaststroke with a broken hand. “The water temperature fluctuated from between 3°C and 6°C,” explained Grigorii Prokopchuk. “The sea was calm with low waves rippling on the surface. The swim started at 4:40 pm (Chukotka time) in the Pacific Ocean about 1,200 m to the south of the Inalik village on Little Diomede.

The main purpose of the swim was fundraising to help sick children in South African Republic and Russia. The other purpose was to attract scientists’ and physicians’ attention to studies of the capabilities of a human body subjected to low temperatures. It turns out that a trained person has the ability of self-recovery from hypothermia in Arctic conditions. The swimmers believe that the swim can help to develop a method of recovering people who have undergone long durations in cold water. The Russian swimmers dedicated the Arctic charity long distance swim to the Year of Culture in Russia and the Year of Arctic in the Republic of Sakha (Yakutia).”

“We did not know anything about Lynne Cox’s first swim between these two island on August 9th 1987,” said Brylin. “So we had to plan this swim by ourselves.”

But the duo come from excellent ice swimming stock.

Brylin is an experienced extreme cold water swimmer and served as the Russian coordinator of the swim. He is head of the Amur Department of the Polar Explorers’ Association, chairman of the Aquaice-sport Federation in the Amur region, and International Winter Swimming Association’s ambassador in Russia.

Prokopchuk is also an experienced extreme cold water swimmer and a representative of the Yakutian Department of the Polar Explorers’ Association. Like his teammate, Prokopchuk participated in the Bering Strait Swim.

Viktor Godlevskiy served as the team’s lifeguard and coach. He is head of the Kamchatka Centre of Long Distance Winter Swimming and the Kamchatka Regional Voluntary Physical Training and Sport Society Sport for Everyone. Like Brylin and Propkopchuk, Godlevskii participated in the Bering Strait Swim.

Upon their arrival on American soil on Little Diomede Island, the trio started to get ready for the swim amid the thick fog, very strong winds, heavy rain, and storm the day before the swim. “We started to prepare by examining the speed and the direction of the currents,” said Brylin.

The next day at 6:30 pm, their adventure began with a 2-hour boat trip to the starting point. “When the boat was 70 meters from the shore, Grigorii and I dove into the water and swam to the coast so that they could start from the land. The water temperature was 6°C when Viktor Godlevskiy gave us the command to start from the rocky American coast.”

During the first half of the swim, the swimmers kept a good pace and swam near each other in a tandem swim. They had to overcome a strong current in the middle of the strait as well as a whirlpool. “We succeeded in doing so thanks to Viktor’s very competent instructions. He was constantly guiding us and telling how much was left to Ratmanova Island.

Gradually it started to get dark on the border of Russia and the USA as the water temperature fell from 6°C to 3°C. A strong south current threw us about 100 meter apart from each other as Grigorii was swimming freestyle and I was swimming breaststroke. We managed to get closer to each other, but the current became stronger and we had to swim 500 meters more to the north of the planned finish. Grigorii managed to land on a small rocky beach, but I was drifted 150 meter farther.”

After touching the shore of the Ratmanova Island, the men were exhausted. The boat did not come immediately to pick them up so they built a fire on shore to begin the re-warming process. It was 2 hours before they left the island.

“After everything, it took about 6 hours to get from the Little Diomede to the Ratmanova island taking into account the time of both swimming and waiting.”

It was not easy to get to either the start or finish. “Our itinerary from July 26th to August 8th started when we met in Petropavlovsk-Kamchatski. Grigorii arrived from Yakutsk, I arrive from Blagoveshchensk, and we met Victor in Petropavlovsk-Kamchatski. Then we all flew to Anchorage, Alaska in the United States, and then to Nome and Wales (in Alaska). After a two-hour trip on a cruise ship Silver Discovery, we landed on Little Diomede before swimming from Little Diomede to Ratmanova Island. Later, a helicopter took us to Lavrentiya Village on the Russian mainland. From there, we took was a postal plane to Anadyr (Russia) and another flight from Anadyr to Khabarovsk and then onto Blagoveshchensk for me or to Yakutsk for Grigorii, and to Petropavlovsk-Kamchatski for Viktor.”

The trio connected a lot of dots to pull off this swim.

The administrative support of the Russian tandem swim team included the Russian Geographical Society, Russian Association of Polar Explorers, Government of the Republic of Sakha (Yakutia), Chukotka Autonomous District’s Administration, Blagoveshchensk City Administration, Legislative Assembly of the Amur region, Border Guard Administration of the FSB of Russia in the Chukotka Autonomous District and the Kamchatka territory, Government of the Kamchtka Territory, and the Permanent Mission of the Republic of Sakha (Yakutia) in the Far Eastern Federal District.

The transport and logistics were taken care of by Yakutia Airlines, The Chukotka Committee for Sport and Tourism, the TSO Lorino Sea Hunters, Polar Explorers’ Association for satellite phones, Chukotka Discovery for permits, and World of Travel for visa support.

The scientific research group included medical monitoring of the swimmers by Amur Regional Centre for Medical Prophylaxis and experimental research during the swim by the Institute of Physical and Technical Problems of the North named after V. P. Larionov of the Russian Academy of Sciences as well as insurance by Gelios-reserve.

The film was made due to financial support of the Kamchatka real estate agency Variant.

The swim between the islands was organized by the Amur Regional Federation AQUAICE-sport together with the International Ice Swimming Association and a charity organization MadSwimmer from South Africa with the support of the Border Guard Service of Russia, Russian Association of Polar Explorers, the Governments of the Reoublic of Sakha (Yakutia), Kamchatka territory, Chukotka Autonomous District and Amur region, Blagoveshchensk and Belogorsk City Administrations.