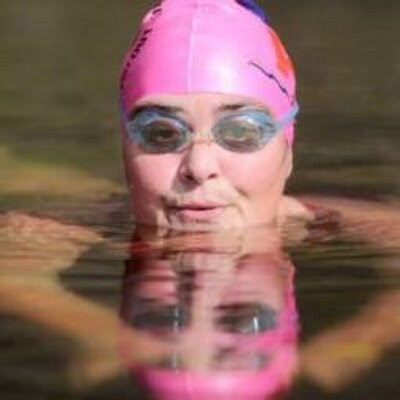 Nuala Moore gave a presentation on her journey to swim 1000 meters at 0°C at the 2014 Global Open Water Swimming Conference.

It is clear that the Irish ice swimmer is focused and has found her niche.

She explains her start in the sea. “I was never allowed to swim with my older brother and his friends. I had to wait on the shore and wait for the boys to swim along the coast and come back. But at the age of 9 or 10, I finally got in. I just went. My biggest thing that I could not show my brother or his friends was fear. But it never dawned of me then – or now – to not move forward.”

I like this statement, ‘If you think something will stop you, you may as well let it.’”

From her early days along the southern shores of Ireland, Moore got into marathon swimming and eventually ended up swimming across Lake Zurich. But then she also became a caregiver to her elderly father. With the time and effort she put into taking care of her father, she no longer found the time to properly train for marathon swims.

“I did not to get to swim 3, 4 or 5 hours in the water,” described Moore who then subsequently shifted her focus to ice swimming. “Tyuman 2012 was my first attempt at ice swimming. I am very good for pain management. I would sit in the ice buckets. I would bring in my heart rate monitor and my blood pressure. I had a rectal thermometer. I loved information, but I also could take the pain.

In Tyuman, the air temperature was minus 33°C when we swam. I thought, ‘How do I breathe at minus 33°C? ‘Slowly was the answer,’ I was told. My mindset was that ‘It is only pain and I only have to stay alive.’”

Moore reiterates the same advice that International Ice Swimming Association co-founder Ram Barkai shares. “The swim is over only when you have recovered, not when the swim itself is over.”

With a 100% commitment to ice swimming, Moore admits there are still areas to uncover and information to discover. “I did not know how far we can still go. At Tyumen, the Russian doctors did not allow me to race initially because my blood pressure was 150/90 at first. This increase [from my usual blood pressure] was due to anxiety. But later it fell to 130/90.

After I was cleared to swim, I entered by climbing down to the water’s edge, but my hands were sticking to the ladder because it was so cold. Once I started, there is an absolute onslaught to your body. The cold water’s impact to the entire body is immediate once you get in. I lost my counting ability after 4 lengths. It was not what I expected.”

But she wanted to try again after she stopped start. “Today happened and tomorrow will come,” she recalls. “What stopped me? In the ice water, my blood is driven to the core and fear is just an emotion. I can let this go. So [to be successful] I started to cut all this ballast, but I knew I needed to have enough in my system to come back.

If anything is exposed, it becomes so in the ice.”