Skip to content
Previous Next
Kingdom’s Swimmers Of The Year 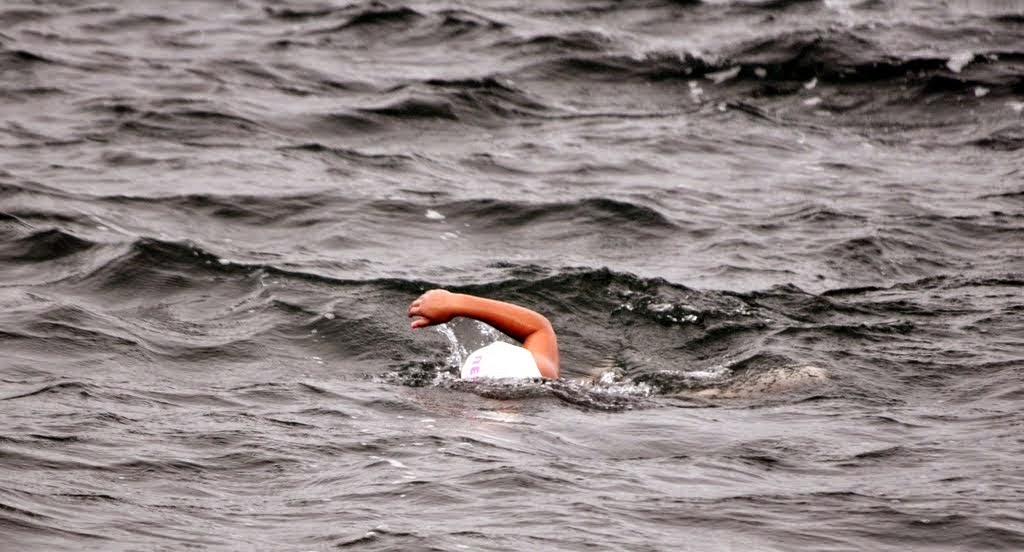 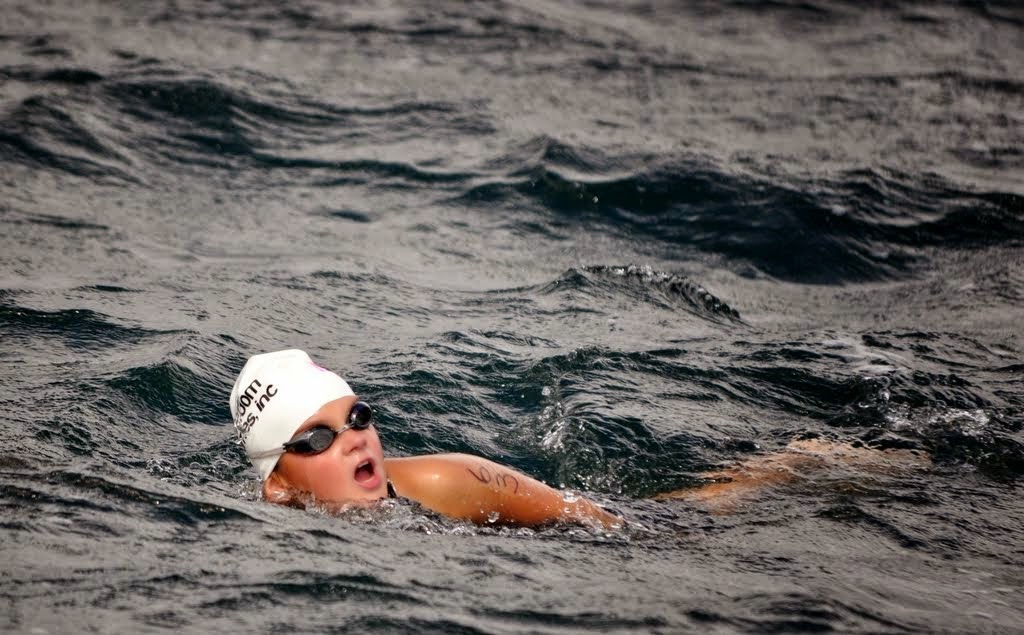 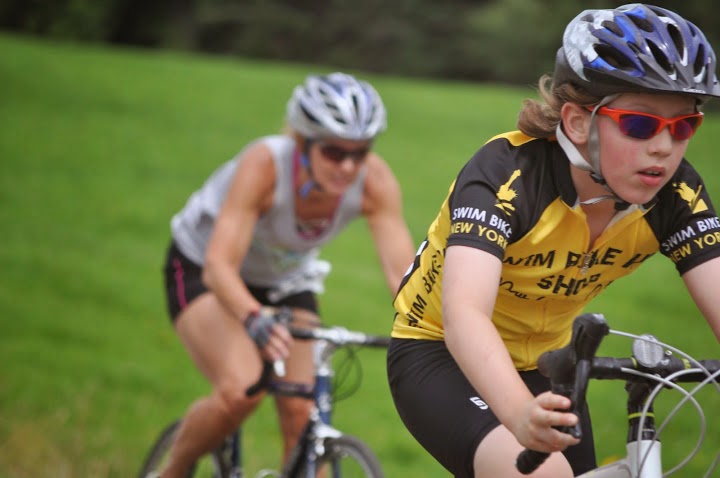 Phil White and the Northeast Kingdom Open Water Swimming Association had a slew of stars to select from for their 2014 NEKOWSA Swimmer of the Year.

White explains about the most inspirational swimmers in the Northeast Kingdom events, “60-year-old, Paula Yankauskas, last year’s NEKOWSA Swimmer of the Year, kept right at it this year. She swam every swim we offered including the inaugural 15-mile Border Buster and every one of our 8 lakes in our Swim the Kingdom Week. In September’s In Search of Memphre, after almost 20 hours in the water, she became the oldest person to complete the 25-mile international swim between Newport, Vermont and Magog, Quebec. Her fundraising during Kingdom Swim won her a trip to Ned Denison’s Distance Swim Camp as she’s planning an English Channel attempt in 2016.

Bethany Bosch is truly a child of Memphremagog. The story has been told many times, but is re-inspiring just to repeat it. Bethany took on our 10-mile course at Kingdom Swim in 2011. It was the longest swim of her life and she was swimming very slowly. She was worried she’d be pulled and the beach would be empty. But she was swimming strong and we had support for her, so we let her stay in the water and keep swimming. She walked to shore in the middle of our award ceremony to a standing ovation of a couple of hundred swimmers and yackers on the beach. She said, at that moment, she knew she was a marathon, open water swimmer. Her fundraising also landed her a slot in Ned’s camp. David Dammerman and others worked with her on her speed. She came back the next year and knocked an hour and a half off her time. She completed our 25-mile swim, In Search of Memphre in 2013. And, this past August, she swam the English Channel.

Bill Shipp is a totally inspiring cancer survivor. His first 10-mile Kingdom Swim was in 2010. He was diagnosed with cancer, beat it, and returned in 2011. And he’s been back each year ever since. His high stepping water entry at Kingdom Swim is distinctive and typical of Bill’s laid-back but competitive attitude to fight for every inch, all the time. He was beaten by the winds the first year of The Search, but he came right back the next year to finish the job. The picture
of his face after the swim is iconic. He truly became The Monster he was searching for. Last year he crewed for Sarah Thomas’s historic double crossing: 30 hours in an aluminum boat, bailing with his boot and keeping Sarah’s feed warm to help her deal with the cold and windy air. This year he was the outright winner of the Boston Light Swim and he successfully crossed the English Channel in September.

Charlotte Brynn, an indefatigable and joyful Kiwi from Vermont. She’s Director of the Swimming Hole and an inspiring leader of the Stowe Distance Swimmers. When she did the 10-mile course of Kingdom Swim in 2009, that too was the longest swim of her life. But she’s taken to the open water like a fish. She was one of four out of 10 to complete In Search of Memphre in its inaugural year, 2011, in the face of fierce headwinds throughout the night and the following day. She went on to attempt, but narrowly miss, the English Channel (hypothermia), Manhattan Island Marathon Swim (late start), and Catalina (shark bite and hypothermia). But this year she came right back at it, with her creemee discipline at weight gain, she took on the 15-mile Border Buster and just about every other swim we offered. She nailed the Manhattan Island Marathon Swim in June and smashed her way through the Catalina Channel wearing her stylin’ swimsuit with a massive shark rising from her belly. She takes on challenges not with a grim determination, but with a total and inspiring joy to be in the fight.

We cried for joy at the accomplishments of these inspiring swimmers and friends. What a year they had. Home town heroes all. Truly great Ambassadors of Kingdom Nation.

And, then there’s Gracie van der Byl. One of three to swim the 120-mile 8 Bridges Swim in consecutive stages and fastest to do so. Record-holder for the fastest Catalina Channel crossing and Champion of Manhattan (Manhattan Island Marathon Swim) this year. She completed In Search of Memphre in 11 hours 33 minutes this year, fastest amateur female to do this crossing. But it is not Gracie’s speed that puts her on this list, it is her willingness to step out of her comfort zone and take on this 25-mile, freshwater challenge. No current assists on this one. No salt water buoyancy. Longest time she’s spent in the water on a single swim. Memphre is never to be underestimated, and she had some tricks up her sleeve this year as she always does. But, Gracie stepped up and took this on. She is a more than worthy candidate.

Speaking of inspiration. Victor Yannessa had been swimming The Kingdom for couple of years when he injured his neck. He asked if he could swim with a snorkel. I checked it out with Steve Munatones and others who know far more than me and we started an Assisted Division that allows snorkels and fins. This opened our swims to amputees, parapalegics, and a wide a variety of others. Victor did a lot of our swims this year. He has a weighted rope that trails behind his kayak that he follows. His determination to keep swimming is an inspiration. But a special thank you to Victor for causing us to create this new division that makes our swims even more inclusive. We’ve had folks with spinal injuries and amputees now joining us. And this year we will be reaching out even more to the adaptive sports community to include more and more of these fiercely determined and inspiring athletes in our swims.

Janet Harris showed up for our Swim the Kingdom Week and became the quintessential standard bearer for the “Just for the Fun of It” spirit of our swims. She was the only one to swim all 45 miles without a wetsuit. But when she and Ika Kovacikova spontaneously erupted into several miles of synchronized swimming during The Clubhous “Slash” Swim on Day 6, we knew she was one special kind of open water swimmer. We are very proud to have her become so much a part of our Kingdom family.

They are all wonderful and worthy candidates; all making for a very special year.

But in the end, two young 10-year-olds stole our heart and, together, share the title of this year’s NEKOWSA Swimmer of the Year. Vera Rivard of Springfield, New Hampshire and Andrew Hyde of New York.

Vera’s mother and I talked more than a few times about her entry into our one-mile course at Kingdom Swim. Yes, she loved to swim and swam a lot in a pond in New Hampshire. But she had never swum in an open water event in her life. She did great in the one-mile swim in July and I talked to her Mom about the 1.5-mile option at Caspian Lake in August. Caspian is a delightful and pristine lake. The swim is the last swim of our 8-lake 45-mile Swim the Kingdom Week. It is a great wind down and has a 3 mile option as well. About a week before the swim, Vera’s mom notified me that Vera was thinking about doing the full 3 miles. I agreed as we had the coverage to watch her closely and Mom would be kayaking by her side. I watched closely as Vera swam to The Rock, slapped it, and turned right around to swim back to the beach. Mom gave me a “thumbs up” and off we went. Just around Black’s Point, the wind picked up, the waves grew, the white caps slapped. Vera swam steadily through it all, unfazed, one stroke at a time, like a mature and experienced open water swimmer. She emerged at the beach and walked ashore with the quiet confidence and steady smile of someone who has just conquered the biggest challenge of her life. Think it’s inspiring to watch Vera’s small young arms take on the mighty waves of Caspian Lake during the longest swim of her life? Nothing better.

And then there’s Andrew. Andrew also took on the longest swim of his life – also a 3-miler at Echo Lake Road Race & Swim and threaded his way through three experienced adult swimmers to come in first place over all. It was great fun and totally inspiring to watch all of this unfold over the course of three miles. When Andrew brought it home, the folks on the bridge (which served as the finish line) were cheering like crazy to see him finish well ahead of the others. This swim was a new event which had been added to The Echo Lake Road Race to create a stage triathlon of running on a Saturday morning, biking on a Saturday afternoon, and swimming on Sunday morning. The swimming field was admittedly limited, but Andrew and his brother Christopher signed on for all three events. Both initially signed up for the one-mile swim option on Sunday. On Saturday, after the running and biking legs, Andrew’s parents asked if he could try the 3-mile course on Sunday. Like, Vera, this would be the longest swim of his life. We had the coverage as I assigned Andrew to one of our more experienced yackers, Mark Whitt who has escorted swimmers in 11 Manhattan Island Marathon Swims. When they set out, a triathlete took the early lead. But Mark and Andrew set a true course around the buoys and they steadily gained on the others. By the time they reached the far shore, Andrew pulled even and then ahead of our wandering triathlete and the others. He never relinquished even a foot after that.

When we look at the stars at night, we are looking into the past, back at the universe the way it used to be. When we watch these young swimmers, we have a glimpse into the future and can see them taking on more great challenges in the years ahead.

So, to these remarkable two ten-year-olds goes the shared title, NEKOWSA Swimmer of the Year 2014 and season swim passes for our 2015 season.”