Skip to content
Previous Next
Edith Van Dijk Did It All 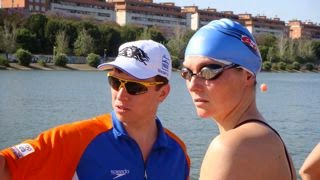 Dr. Edith van Dijk has done it all, from the pool and classroom to open bodies of water around the world.

She is a mother, a Ph.D., an Olympian, a 6-time world champion, a professional marathon swimmer, and a competitive pool swimmer who crossed the English Channel with a doctorate in economics and a movie credit to boot.

Piaf, as she was nicknamed by her teammates, was honored as the 2008 World Open Water Swimming Woman of the Year.

That year, she came out of retirement to place 14th at the Olympic 10K Marathon Swim after giving birth to her first child. She was also named the 2005 World Open Water Swimmer of the Year by Swimming World Magazine and received the prestigious Dutch Female Sporter of the Year in 2005 (Jaap Eden Sports Awards) based on an impressive week of work at the 2005 FINA World Championships in Montreal, Canada where she won the bronze medal in the 5 km and two golds in the 10 km and 25 km races.

Her coach is also her husband and fellow English Channel swimmer, Hans van Goor. Van Goor not only holds the Dutch record for the English Channel in 8 hours 2 minutes, but also the family record as well as his wife swam the Channel in 9 hours 8 minutes.

>Her open water swimming career started at the famous Dutch lake Ijsselmeermarathon and has taken her to Austria, Hawaii, Australia, Canada, Argentina, Brazil, Perth, Montreal, China and many other places in between.

In 2008, before finishing 14th in at the Olympics as a come-back 35-year-old with child, she placed 4th in the 5 km, 4th in the 10 km (only 3.1 seconds behind champion Larisa Ilchenko) and tied for 4th in the 25 km at the European Open Water Swimming Championships.

These results that culminated her lengthy career were a testament to her versatility and passion for the sport.