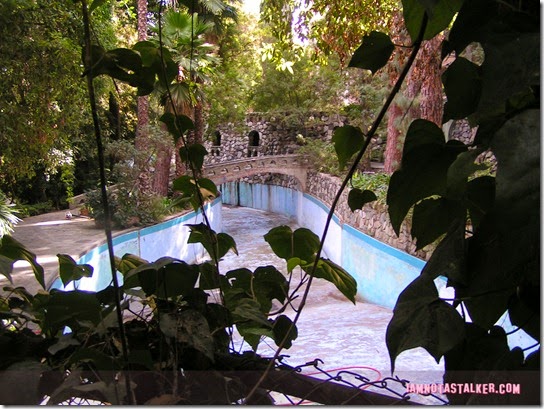 In an abandoned lot in the upscale neighborhood of Bel Air near Los Angeles lies on unkept pool with a history like few others.

The pool was built on a home used by one of the greatest swimmers of all time, Johnny Weissmuller.

As the 301-foot (91.7m) pool [shown above] winds around the impressive estate in a neighborhood famed for business moguls, actors and stars, one could imagine Weissmuller keeping in shape for his films and post-swimming career.

The serpentine pool was wide enough for boats to plough through and winding enough among expansive landscaping, a waterfall, and lush tropical greenery to serve as one of the most exotic training facilities in California. It features a bridge that arches over the waterway where Weissmuller could be seen working out from the main house’s Gothic windows or hand-painted stucco cabanas. Weissmuller could look up at hand-painted murals as he swam under the bottom of the bridge over the pool and swam past gardens on his left and right that must have replicated the imagery world of Tarzan.

The former Tarzan actor who won 5 Olympic gold medals and one bronze and set over 50 world records was also inducted in the International Marathon Swimming Hall of Fame in 1970.

Weissmuller’s longest open water swim was the 3.2 km (2 miles) Chicago River Race. But, even more importantly, he accepted an assignment as the International Commissioner of Marathon Swimming and represented the sport of marathon swimming and the World Professional Marathon Swimming Federation.