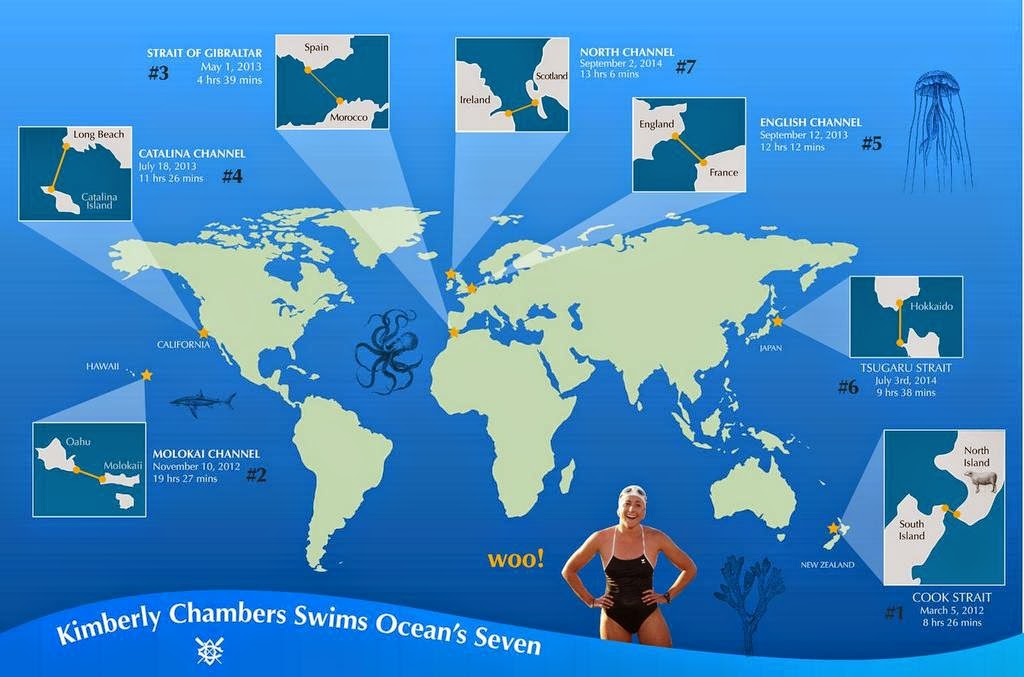 The two-time World Open Water Swimming Woman of the Year nominee realized her dream of completing the Oceans Seven this year and Adobe saw fit to celebrate her crossings here.

For two years in a row, she has impressed the marathon swimming, channel swimming and endurance sports communities with her relentless drive to achieve the Oceans Seven.

In 2013, her World Open Water Swimming Woman of the Year nomination read, “Kimberley Chambers was 30 minutes from having her leg amputated after a traumatic fall down a flight of stairs. Nearly all hope had evaporated in the hospital, but destiny ultimately intervened. After her leg was saved, she took up swimming in order to avoid being disabled and unable to walk. After a difficult two-year rehabilitation period, she learned to love swimming and those in the sport. This year, she has blossomed in ways she could not have imagined before. She completed the Strait of Gibraltar in May, the Catalina Channel in July, and the English Channel in September en route towards her goal of achieving the Oceans Seven. For her optimistic view of life, for her deep sense of appreciation of her teammates and supporters, for her utter joy in the discovery of her vast potential, Kimberley Chambers is a worthy nominee for the 2013 World Open Water Swimming Woman of the Year.”

This year, her World Open Water Swimming Woman of the Year nomination reads, “From a near amputation to this year’s completion of the Oceans Seven, few swimmers in history have come back from such depths to stand atop the marathon swimming world. Kimberley Chambers, a former ballerina whose leg was minutes from being amputated, took to swimming for rehabilitation – not for marathon swimming glory. But she needed to prove to herself and her doctors that she could recover from a terrible leg injury by completing 7 difficult channels around the world including a jellyfish-strewn North Channel crossing where she went into toxic shock. After years of struggle and sacrifice, the Kiwi living in San Francisco has transformed mindsets on what is truly possible in the open water. Personable, humble and profoundly eloquent, she is a role model in her rehabilitation and monumental swimming achievements. For her goal-setting mentality, for her laughter and motivational spirit, for her genuine willingness to share everything she has experienced along the way, Kimberley Chambers is a worthy nominee for the 2014 World Open Water Swimming Woman of the Year.”