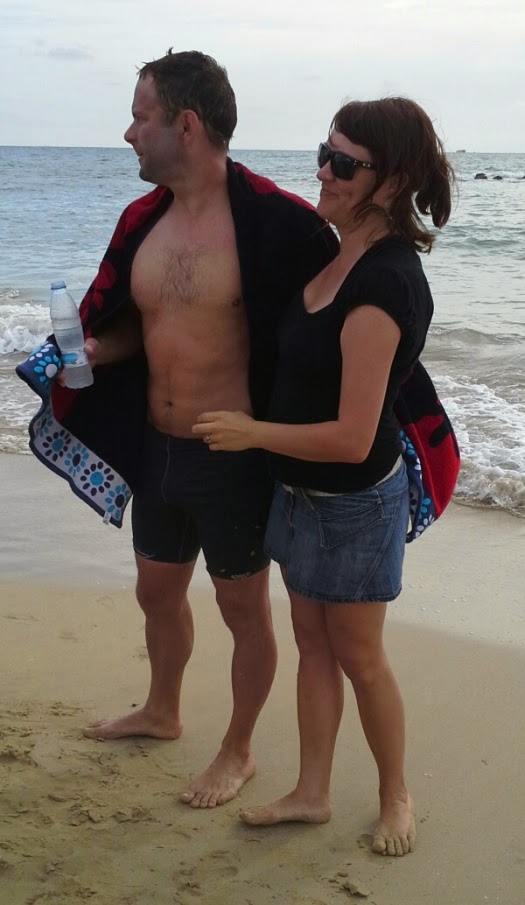 His circumnavigation swim around Mallorca, Spain was nominated for the 2014 World Open Water Swimming Performance of the Year and included 276.5 km of swimming under unrelenting heat while he nursed an injured shoulder, caught a stomach virus en route, and was constantly stung by jellyfish throughout the nearly 96 hour ordeal.

But he remained focused as his stage swim around the beautiful Spanish island was done as a remembrance and tribute to his brother who passed away. We asked him about his effort in hindsight:

The weather was terrible the whole way, but I managed to swim 18 km on that day in particularly bad weather. It was a huge relief and positive mental booster. I was stuck in that bay for a few days due to the weather and getting out of it was of huge importance to me. So the image of that lighthouse will be stuck in my head forever.

Daily News of Open Water Swimming: What did the swim teach you or demonstrate to you?
Richard Krugel: The swim taught me a number of important things:

a) Patience. Take one day at a time and do whatever you do that day to the best of your ability.
b) Big things can be achieved in small steps. Setting small goals first and finishing them properly makes reaching your final goal so much easier.
c) Respect for the ocean. In the beginning I wanted to fight against the elements since the weather was terrible. In the end, it was easier to just put one arm in front of the other and ‘go with the flow’ and accept what was happening.
d) You really can achieve a lot if you put your mind to it.
e) Live to achieve your dreams.
f) Swimming for the Fundacion Allen Graham Charity and meeting some of the children I swum for made me realize how advantaged most of us are. So whenever I felt pain or had any negative thoughts, I just told myself to get over myself, shut up and swim. Other people are worst off than me, and here I am swimming my dream, so stop moaning.

Daily News of Open Water Swimming: How long did it take you to recover?
Richard Krugel: The day I stopped swimming, it really felt like I could swim around the island again. But the next day after the swim, my body felt really sore and it took me a good 2 weeks to recover. I noticed my vision was deteriorating for two weeks afterwards. Then it just started getting better again. I still don’t know what that was about. Recovering mentally was a bit harder. It felt like I was marooned on an island for years and returning back to the ‘real’ life was a bit of an adjustment again. After 2 weeks I returned to the pool for a swim and it felt really weird. I slowly regained my strength and still enjoy swimming and keeping fit.

Daily News of Open Water Swimming: How much money did you raise?
Richard Krugel: We managed to raise just over 10,000 Euro. This in itself was great, BUT the best thing about the whole swim was that the money raised, were put forth to get two of the charities older kids (18 years) through university. The one kid will study law and the other dramatic arts. Now that was money well spent. I feel immensely proud of this fact.

Daily News of Open Water Swimming: Was there anything that surprised you during the stage swim?
Richard Krugel: The amount of jellyfish and few marine life surprised me. That was a negative for me. A positive would be the amount of support I got from my sponsors, people that followed me and my families commitment to my goal. It made me realize that I was doing something big. To me it was almost normal, but obviously it was not to them.