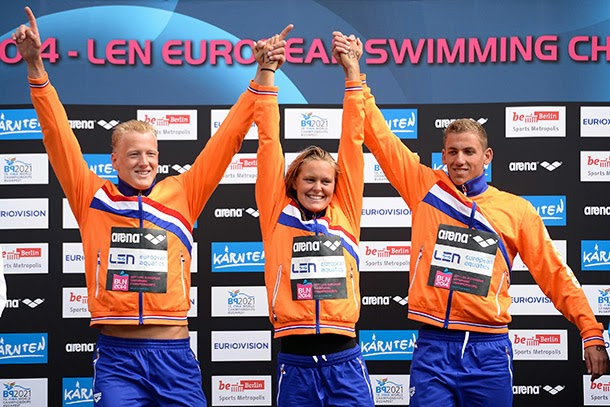 The world-class backstroker and distance freestyler quickly transitioned herself to be among the elite in the open water swimming world. With her gold medal in the 10 km marathon swim, a silver in the 5 km open water race, and another gold in the 5 km team pursuit with her Dutch teammates Ferry Weertman and Marcel Schouten at the 32nd LEN European Championships in Germany, Van Rouwendaal clearly established herself among the highest echelon in the open water swimming world.

With the tradition of success among her Dutch predecessors from Judith van Berkel-de Nijs in the 1960s to Maarten van der Weijden at the 2008 Beijing Olympics and the Netherlands’ most recent 25 km world champion Linsy Heister, Von Rouwendaal demonstrated her talents mirror the ways of champion Dutch swimmers.

For her meteoric rise to the elite open water swimming level, for her enthusiastic embrace of a new aquatic discipline, for her triple-medal performance at the European Championships, Sharon van Rouwendall was also nominated for the 2014 World Open Water Swimming Woman of the Year award.