Skip to content
Previous Next
Torture Treats The Tenacious 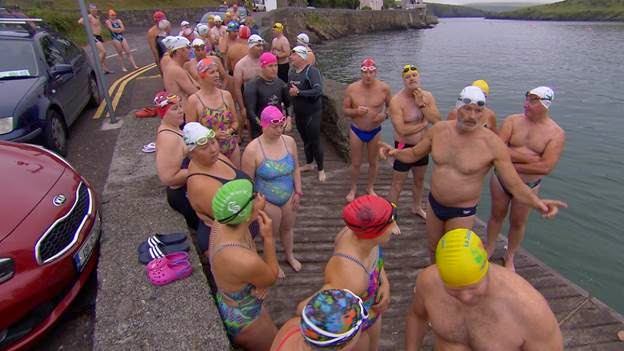 If there is anyone who embodies the sport of open water swimming and all of its myriad niches, from ice swimming to channel swimming, it is Ned Denison.

The former water polo All-American is more than a spokesman, more than an ambassador, more than an evangelist about the joys and challenges of open water swimming. He is ubiquitous and unselfish. Whether he is swimming around the local Sandycove Island in Cork, Ireland or traveling to South Africa to swim with sharks or competing in Hong Kong, he is always near, over or under water.

With a personality that matches his nearly 200 cm height, he elevates those around him as he stands tall among the global pantheon of open water swimmers. He is a beacon, a Pied Piper, a Marathon Man who inspires those around him.

The staff of 60 Minutes, the popular television program that has long dominated Sunday night audiences in the United States, quickly and easily understood Denison’s allure. In its well-received program on open water swimming, Denison quickly stole the show and was the centerpiece of The Torture Swim.

Like a channel swim that progresses without a hitch, The Torture Swim came together smoothly. But also similar to a channel swim, there was a whole lot of preparation behind the scenes. Long days of planning, loads of research, hours of interviews were all edited together for a tight, impressive perspective on swimming in the sea.

Producer Alan Goldberg, host Jeff Glor and protagonist Denison combined their talents and wove a compelling tale about the sport. As Glor explained in the opening scene in the program, 60 Minutes Sports took a look at the one of the most dangerous and unheralded sports in the world during the unparalleled Cork Distance Week.

Denison has annually enticed an international group of unassuming adults to travel to the small Irish offshore island near Cork and test themselves. His relentless cajoling – with a dash of jovial severity – is what swimmers look forward to, especially those willing to push themselves to utter exhaustion.

The rawness and cruelty of the sport, the ambiance and the challenges of Cork Distance Week, the turbulence and inherent risks of the sea were marvelously captured by Goldberg whose cameras never veered far from Denison’s long shadows. The scenery and emotions enraptured viewers as the program kicked off with powerful imagery and never let up as it culminated in explaining the inexplicable – why swimmers accept physical agony beyond comprehension.

“I grew up watching 60 minutes [in America] so I was sure that the production quality would be excellent, but wow!” remarked Denison. “Living in Cork, I forget what amazing places we have to swim. For the mass U.S. audience, hopefully The Torture Swim is a great introduction to the sport. It captured the range of swimmers: 20s to 60s, thin to powerful, slower to faster and novice to elite.

For its compelling presentation of the sport, for making heroes of everyday swimmers, for its ingenuity in creating stunning visuals of Sandycove Island, The Torture Swim by 60 Minutes Sports was nominated for the 2014 World Open Water Swimming Offering of the Year.

To vote for the WOWSA Awards, register here.