Skip to content
Previous Next
Race Invitations, Then And Now 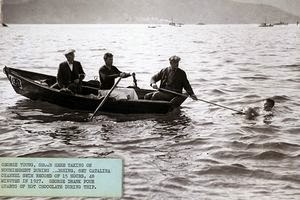 Nowadays, top swimmers are invited to race by event directors via email or mobile devices.

But in the previous century, snail mail delivered the good news to athletes.

The invitation reassured the veteran open water swimmer from Toronto that the Catalina Channel would be a relatively mild 65°F.

For open water swimmers familiar with the Pacific Ocean around Catalina Channel, the promise of 65°F water in mid-January certainly does not ring to be true. At best, it is overly optimistic.

Mendelson, an entrepreneurial athlete, was very excited about the possibility of winning US$25,000, but he had to take care of business first. One of his helpers, George Young who had established quite a reputation locally, was able to take off earlier than Mendelsen. Mendelson, who was running a delivery service at the time, had to delay his trip to Southern California.

“George got enough money from his mother to buy a second-hand motorcycle. He decided to take off for California about the middle of December. I had to wait.”

Imagine this: an 17-year-old teenage boy driving an old motorcycle across the North American continent to compete in an ocean marathon. There were no parents, no airlines to catch, no coach to guide him. But Young recruited a friend, Bill Hastings, to join him on the adventure. By Chicago, the motorcycle ran no more. Fortune reigned upon the duo when Wrigley repaired the motorcycle in exchange for the pair to carry an advertising sign for the swim on their motorcycle all the way to California. By the middle of America, the motorcycle repairs could take the pair no further. Desperate but lucky, they were able to hitch a ride by a pair of honeymooners to America’s West Coast.

Meanwhile, Mendelsen finally joined his fellow swimmers from Toronto and discovered the warm water has evaporated. “One of the first things I discovered was that I had been deceived about the temperature of the water. I found out [the Pacific Ocean] was more like 47°F than the 65°F that had been mentioned. There was no way I could swim in that water.”

But Young demonstrated that he could despite spending the previous weeks traveling from Toronto to Catalina.

After Young’s unexpected victory, Mendelsen wired his eyewitness account on the race to The Star newspaper in Toronto as soon as he climbed onshore. “I went up to the hospital to see George. He was fine.“

And history was made by the Scotland-born teenager from Toronto’s West End YMCA coached by Johnny Walker.