Skip to content
The Beginnings Of The ILDSA, 1967 Archives 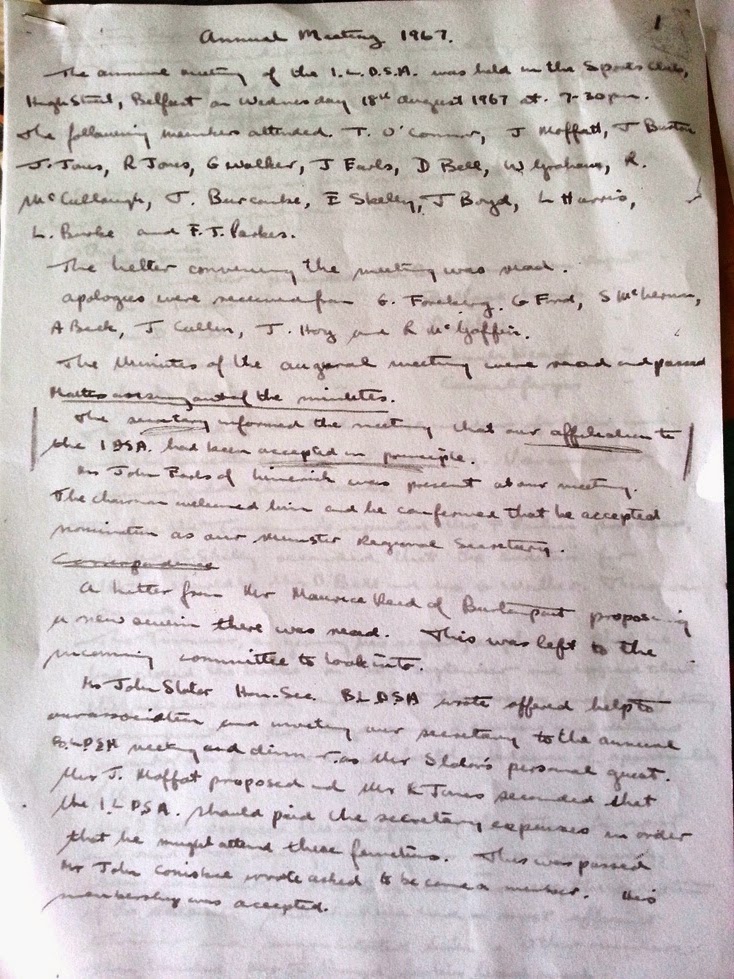 Billy Wallace provided minutes from the Irish Long Distance Swimming Committee in 1967 that were provided at the Inaugural Annual General Meeting in 1967 by Honorary Secretary Fred Parkes.

We, as an association, must be proud of our achievements and progress this year and it gives me great pleasure in presenting our first annual report.

The association owes its origin to Mr. John Moffett who had been talking about forming an Irish Long Distance Swimming Association for quite some time. He finally persuaded a few of us that it would be to the advantage of Irish Swimming to have a body primarily interested in distance swimming. So after the Copeland Islands to Donaghadee swim in August, 1966 a caretaker association was formed which was instructed to call a general meeting later in the year and to invited interested people to attend. These instructions were carried out and the inaugural meeting of the Irish Long Distance Swimming Association was held in the International Hotel, Belfast on the 22nd September, 1966. Mr. J. Moffett became the association’s first general secretary, Mr. L. Harris was elected chairman and Mr. J. Boyd treasurer.

Unfortunately, at the first committee meeting of the newly formed association, Mr. Moffett had to resign due to pressure of business and he proposed Mr. F. J. Parkes as his successor. This was agreed to by the committee. We owe a great deal to John Moffett for his belief in such an association and his untiring effort in forming it. 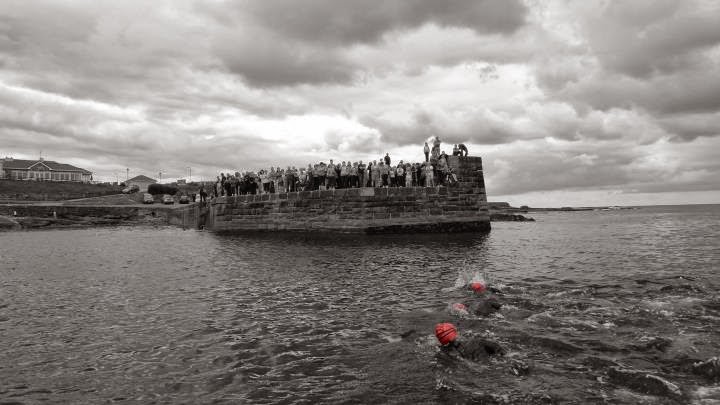 Our affiliation to the I.A.S.A. having been accepted members suggested three possible swims. Mr. J. Burcombe suggested a Belfast Lough Swim, Mr. J. Moffett a Donegal Bay Swim and Messrs. R. Jones and R. McGaffin a Lough Neagh Swim. The committee decided to limit our efforts to these three ventures and to make sure these were successful.

The first swim came much earlier than we had thought and was arranged very quickly. The Bundoran Development Company had a Lobster Festival in late May and asked us to organize a 1¾ mile swim. Eight swimmers and three officials travelled to Bundoran on Sunday the 28th May and the race took place on the Monday. This event was very successful and a very enjoyable time was had by all. The cup, which was presented by Guinness Ltd., was won by Ronnie Jones. We should like to thank our sponsors Bundoran Development Company and Arthur Guinness Ltd., who were so pleased with the race that they have asked us to make it an annual event. Further details of this event are given in a report by G. Walker.

The next venture was the Belfast Lough Swim which was swum on Saturday 1st July, 1967 from Helen’s Bay to Carrickfergus, a distance of 4.2 miles. This race was a tremendous success with 13 starters and no less than 8 finishers. The Guards Cup was won on handicap by Jim Burton and the fastest time of 1 mile 47 minutes was recorded by Ronnie Jones. The Belfast Lough Swim received a great amount of publicity and established the association as a strong and competent body. We are very grateful to Carreras Ltd., and the Carrickfergus Borough Council who were our sponsors. A special note of thanks is due to Mr. Hugh Love for his help and assistance. Next year I hope we will lengthen the course to at least five miles and invite some International swimmers to compete. Further details of this race are given in a report by M. L. Harris.

After testing our strength in the Belfast Lough Swim three of our members expressed interest in swimming in the B.L.D.S.A. Rathlin to Ballycastle Swim. The B.L.D.S.A. therefore got in tough with the Ballycastle Urban Council who welcomed the idea of our members competing. They and we got in touch with Mr. Kendall Mellors, the Assistant Secretary of the British Long Distance Swimming Association and the organizer of the event. He was delighted and accepted the entries. He asked for our assistance in running the race.

Unfortunately due to bad weather the Ratalin Swim did not take place but the substitute race, Fairhead to Ballycastle, was swum. This was over a distance of approximately three miles and the race was won by R. Jones. L. Burke was 4th and E. Skelly was 6th. These three men put up a magnificent show and let us see that they could compete on equal terms with members of the B.L.D.S.A.

At Ballycastle the B.L.D.S.A. and the I.L.D.S.A. members formed firm friendships. Since Ballycastle our association has had numerous letters from Mr. Kendall Mellors and Commander Gerald Forsberg. The latter has since joined our association as a life member. Another outcome of the Ballycastle Swim is that both associations have accepted that we should be mutually affiliated. Mr. John Slator, the Honorary Secretary of the B.L.D.S.A. has written and given us details of their swims and annual meeting and has done his best to assist our young association.

Our next swim was over a 2 mile course in Lough Neagh. This race was organized by a sub-committee of Messrs. J. Jones, R. Jones and R. Mc Gaffin. Because of bad weather the race had to be postponed to the following Saturday the 19th August 1967 at 3 p.m. The course, in the northern part of the lough, was from Skefflington Lodge to the Firing Head and back. It was a glorious day and the swim was most enjoyable. There were 13 starters and 11 finishers. We are very grateful to Mr. Marcus and Charrington and Kinahan for sponsoring this event.

The last swim of the year was a short sprint of 1000 yards. This swim took place on Thursday 31st August at 8 p.m. and was from The Old Quay to Carrickfergus Harbour. We are very grateful to the Carrickfergus Sailing Club for providing the prizes and refreshments. This event was organized by Messrs. Boyd, McLerson and Burke.

I should like to congratulate all the swimmers for the magnificent show they put up this year. In long distance swimming the achievement is in finishing the course and the time taken is only a secondary consideration. I feel I must single out Ronnie Jones for particular mention. Ronnie, who returned the fastest time in each of our swims and won the B.L.D.S.A. Irish Championship, was the outstanding swimmer. My only disappointment was that Ronnie did not attempt a longer solo swim such as Lough Neagh, Whitehead to Bangor or compete in one of the British races. But let us hope that next year Ronnie and some of our other swimmers will attempt other swims in the British Isles.

Now that our association is well established, next year could be a most important one in the respect that we should become an all Ireland association. We must strive to promote swims and recruit members in all parts of Ireland. Some of our members have suggested that we promote such swims as Aranmore to Burtonport, Lakes of Killaruey and a Dublin Bay Swim. It was noticeable this year that each swim increased our membership and this surely will be the case next year. Another thing we should encourage our swimmers to do is to compete in Great Britain and to tempt Great Britain swimmers to swim over here.

Finally, I should like to thank our Chairman, Louis Harris and our Honorary Treasurer, Jimmy Boyd for all the assistance they have given to me personally and to the association this year. To all you who have swum, rowed, officiated, organized or helped in any way at all, our sincere thanks.