Skip to content
Konrad Euler, A Man With An Iron Will 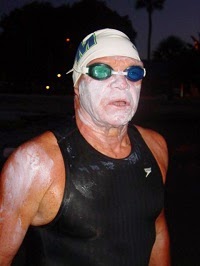 Courtesy of WOWSA, Huntington Beach, California. Background information from the St. Petersburg Times on May 13th 2002.

Dr. Konrad Euler passed recently. The memory and legacy of the personable German native and Florida resident will be long remembered by his teammates and those who knew him and were touched by him.

“Konrad was a father figure and a friend to me, and many of my teammates at St. Pete Masters. We feel like we’ve all lost a family member,” says Ron Collins.

Dr. Euler knew his stroke pattern. It was precise: he took 500 breaths to a mile. Over and over again in the open water.

He had to work hard, especially hard.

After spending 4 years in a hospital as a child with a cast from his chest to his feet and another 6 years with a leg cast and leg braces in a length rehabilitation, he had to work harder than most people, especially with his left leg 5 inches shorter than his right leg.

Imagine 4 years held captive by a body cast when he could only move his head. “All I could see was just outside my window, whether it was sunny, raining, snowing.“

But his father taught him a valuable lesson: “You can do anything anybody else can do. It just takes you a little more energy, more exercise and an iron will.” Dr. Euler showed that iron will throughout his life.

But his obstacles were not over, even after he was able to shed his cast and braces. As a young adult, he developed scoliosis, a curvature of the spine, “I thought the best thing to rearrange my bones was to be in water.”

So he started to swim more and more. By the time he had retired and moved from his native Germany to Florida, he was swimming 5,000 yards daily. With one leg shorter than the other, his longer right leg starts to cramp when doing flip turns in the pool. “My left almost never reaches the wall.” So the open water was a great alternative. “The longer I swim without turning, the better I am.”

After completing the 12.5-mile Swim Around Key West, he set forth towards an even longer goal, the 24-mile Tampa Bay Marathon Swim. But his journey to the finish would take years.