Skip to content
Previous Next
Swimming Home To Morocco 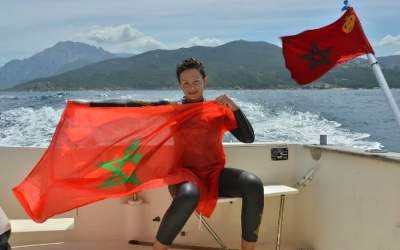 Very few swimmers head home when they swim across the Strait of Gibraltar. Among those few channel swimmers since 1928, only one solo swimmer was a woman.

Nadia El Bahtane became the first Moroccan woman to complete a solo crossing of the Strait of Gibraltar yesterday.

The Rabat native who now lives in Casablanca crossed the strait in 4 hours 18 minutes, swimming from Tarifa and landing near Punto Cires.

Sakina Zerrel, a fellow open water swimming friend remarked, “She worked really hard for this. She’s a mother of 2 young girls and an accomplished professional at the peak of a successful career. After her swim, Nadia has been contacted by multiple news agencies regarding her achievement, the object of national pride in her homeland. Yet, she remains so humble. What is remarkable about her feat is that she was mostly alone preparing for this, in a country where swimming is not the sport of predilection. Soccer takes all the popularity there. I am excited at the fact that her achievement showcases an Arab, Berber, Muslim woman as a successful athlete; like many other women around the world, she is an ordinary woman with a drive, out to make the best out of her life.”.”