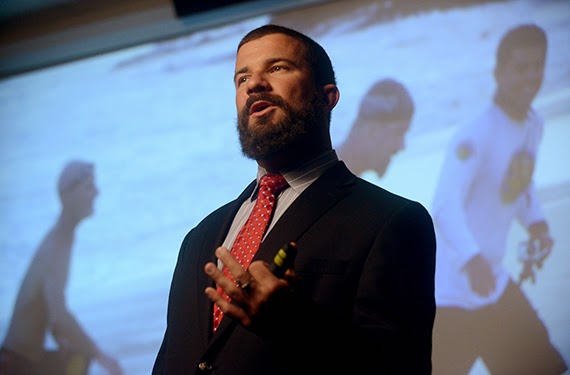 San Diego is acknowledged as the global hub for triathlon. Starting back in 1974, the sunny capital of multisports has prided itself at developing and nurturing everyone from the world’s best triathletes to age-groupers focused on multisports.

San Diego not only has the ideal climate and weather for year-round training and racing, but there are also hundreds of local events, camps, coaches, challenges, and clinics that cater to those who push themselves in more than one sporting discipline – as well as miles and miles of beautiful coastline bordering the Pacific Ocean and Mission Bay.

It was in this mecca that Darren Miller ventured. The man who was a pool sprinter in college and who later gained significant weight to achieve the Oceans Seven wanted to attempt the Sub-32 marathon.

The challenge was first posted on the Daily News of Open Water Swimming and triathlon websites and forums. The response was quick – and dismissive. Triathletes claimed it was easy to do, not much of a challenge, and well within the capabilities of professional triathletes and top age-group athletes.

While that may very well be true, the Sub-32 marathon has yet to be accomplished by anyone in the triathlon world. It is our belief that the Sub-32 marathon is well within the capabilities of multipart athletes in their 20s and 30s – and perhaps a handful in their 40s, but running 42 km and completing a non-wetsuit, non-current-assisted marathon swim of 10 km – back-to-back and both under 3 hours is tough no matter how you look at it.

Miller ventured a challenge to the triathlon and multisports communities and was willing to travel across the country to take on all comers in San Diego.

But he had no challengers.

So he moved his challenge closer to home. Miller will attempt the Sub-32 marathon as a charity event in Presque Isle State Park on Lake Erie in Pennsylvania. Miller writes, “Presque Isle is a few short hours north of Pittsburgh. It is the perfect setting to have a marathon run and a marathon swim, back-to-back.

The run will follow the Presque Isle Half and Erie Marathon courses; a flat, 13.1-mile lakefront loop around the park. Confirmation on the marathon run pace team and crew is pending. Josh Heynes, a marathon swimmer, Ironman triathlete, and founder of the Lake Erie Open Water Swimming Association, will be head crew to support the swimming portion along with other Canadian marathon swimmers.

This setting is very special, as it was the site of my first 5 km open water race back in 1999.

The event will be held in honor of [my fiancée’s] 11-year-old cousin who has recently been diagnosed with Ewing’s Sarcoma, a rare form of cancer which forms in the bone. As her battle begins, Julia and her family will be challenged in a way many will never know, and we have decided to make this a benefit race to support their journey (see here).”