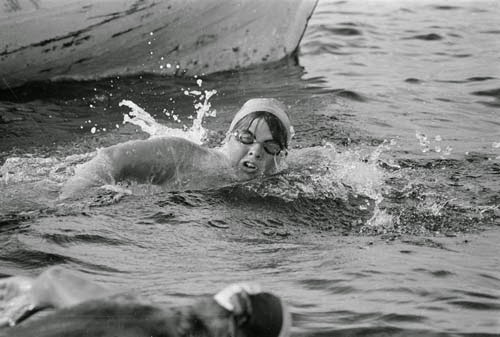 Photo shows Lynne Cox, one of the greatest open water swimmers in history.

An experienced open water swimmer recently wrote and suggested that the contemporary open water swimming community does not give enough credit to Lynne Cox who has long been pushing boundaries in the open water world since the 1970s, maintaining her peak throughout the 1980s and 1990s.

Cox, as one of the world’s most renowned aquatic adventurers, has done a number of unprecedented swims throughout her career. So we decided to put together one of our most difficult lists to create: the World’s Top 100 Open Water Swims in History.

The list includes audacious, unprecedented, extreme, geographically-dispersed swims across and in various open bodies of water around the world dating from 1810 to the present. The swims are listed alphabetically by the first name of the swimmer and are limited to 3 individual swims per swimmer: