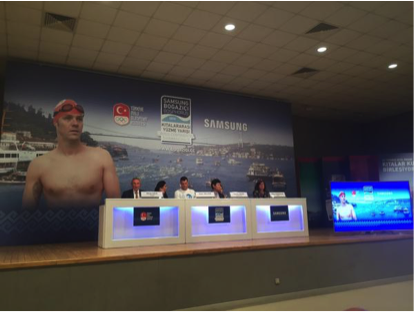 These renowned swimmers are the only 4 people who have officially hosted the Samsung Bosphorus Cross Continental Swimming Race (Boğazıçi Kitalararasi Yarislari).

Walker hosted and participated in the 27th annual 6.5 km swim, , one of the world’s top open water swimming events, from Asia to Europe on July 25th. He also helped promote another event that took place on the 100th Anzac Day. “It was another true honour in celebration of 100 years since the battle in Gallipoli,” recalled Walker at the Gallipoli Memorial Swim who was visibly moved with the logistics and festivities as organized by the Turkish Olympic Committee.

“Having attended many open water swimming events, I was blown away with how much national media attention Samsung Bosphorus Cross Continental Swimming Race received. As with most race events, there is a limit to the number of applications that are allowed to actually take part. The spaces sold out extremely fast due to the worldwide popularity of the competition.

I can’t praise the Turkish Olympic Committee enough for their organisation and running of this event. In the run up to the race, the competitors were taken out on boat trips so they could be advised of the best route to take through the strong currents of the Bosphorus on the day of their swim. The general public were also welcome on these trips just to take in the incredible scenery. The Bosphorus is usually a very busy shipping lane, but for this one event it is closed off especially for four hours.

The swimmers were kitted out with goodie bags and received a chip to track their swim time as well as for their safety. Huge video screens were placed around the venue some displaying the competitors’ results, others showing the action of the race with the various camera angles capturing the competitors as they finished, the awards ceremonies and the 8,000-strong crowd of spectators, making it an enjoyable experience for all.

There was a real buzz throughout Istanbul surrounding the event. The streets were aligned with giant billboards and banners and the media coverage was unbelievable. There must have had 20 television interviews and the same again for newspaper, magazines and radio.

On the day before the race, I took part in a show swim with a number of great swimmers. The atmosphere felt similar to a football game in England, I have never seen such excitement around open water swimming. Hopefully a sign of things to come.

The Turkish Olympic Committee hold this event every year in the name of friendship and peace, bringing countries around the world to celebrate through open water swimming. This year there were 49 countries in total. I cannot describe the noise and excitement having travelled on a boat out to the start with all 1,870 swimmers.

I loved going to each deck shouting out the different countries and hearing the cheers come back. It was fantastic. It was an incredible experience to kick-start the race, then followed some motivational chanting and clapping on the starting platform to get everyone psyched up for their swim Ocean Walker style. This year the currents were reported back as not being particularly strong and the winner Bertuğ Coşkun from Turkey came in at 1 hour 2 minutes

Note: Nearly 1,600 people were turned away this year due to overwhelming demand.