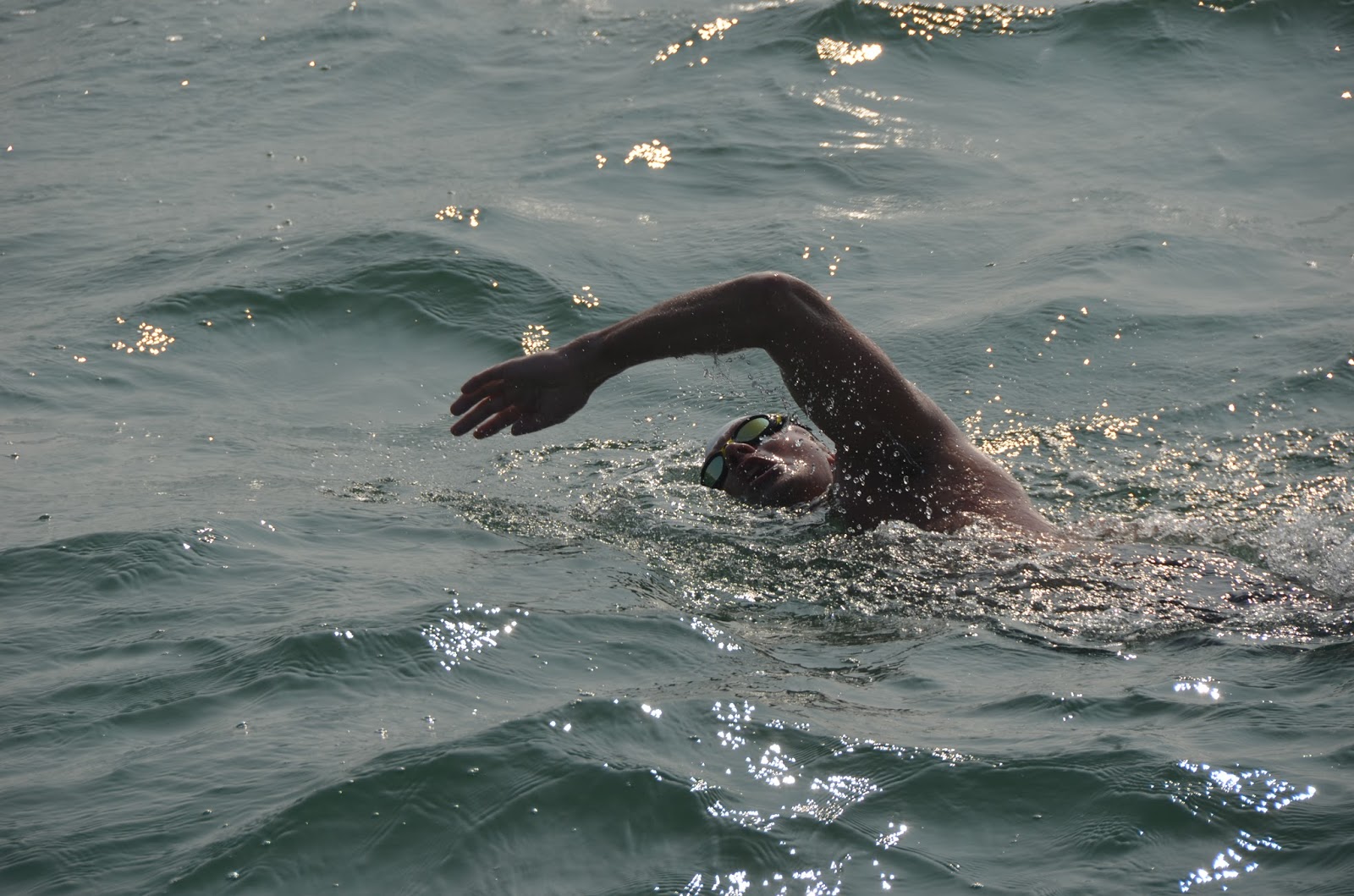 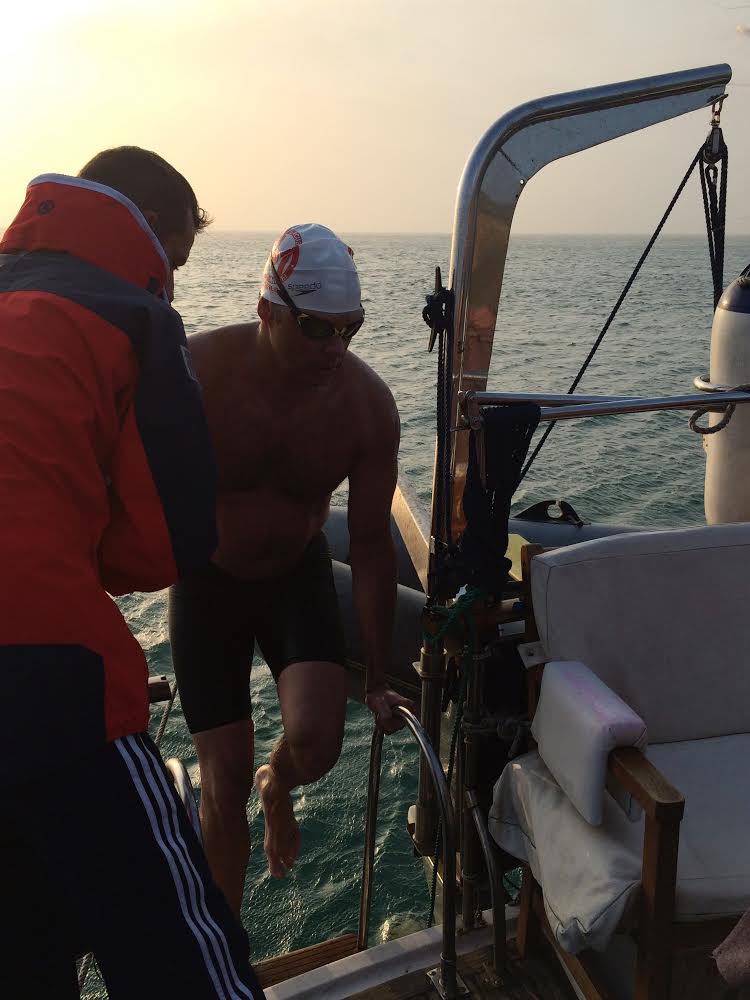 It was one of Thomas Bell‘s wife’s friends who participated in an English Channel relay that spurred him to consider a crossing of the English Channel.

He thought an English Channel attempt would motivate him to work out consistently. “I focused on swimming beginning in July 2012 under the guidance of my coach and nephew, Dan Daly Jr., a professional trainer and collegiate swimmer. At the same time, I signed up for a swim slot with seasoned English Channel pilot Paul Foreman for September 2014.

I knew needed experience and so I also signed up for the 2013 Tampa Bay Marathon Swim, the Catalina Channel for August 2013, and several shorter events. In April 2013, I missed the cut-off time to finish the 24-mile Tampa Bay Marathon Swim thanks in part to tough weather, but I was encouraged that I lasted 11 hours.

Later that summer in August, my Catalina swim began at Catalina Island off the California coast close to midnight under a star-filled sky. Conditions were near ideal with no wind, warm dry air, and bioluminescence in the water. The water was chilly, but I had trained in the two prior weeks in the San Francisco Bay in colder conditions to prepare. Winds picked up as the sun rose, and the water temperature dropped as currents pushed deep cold water to the surface, but land was clearly in sight and I finished in 11 hours.”

Coach Daly had Bell in the pool 2-3 hours per day six days a week for three years training for his marathon swims. “Working full time prevented double swim workouts, but I did manage to lift weights two nights a week. Dan’s workouts focused on distance intervals with some speed and drill work mixed in. Weight routines were mostly pull-ups, squats, dead lifts, bench press, and so on. Although the time spent in the pool was physically and mentally challenging, I found that not having a training partner was the most difficult aspect. However, being able to eat as much as I wanted was great. I routinely ordered two entrees at restaurants and managed to impress the kitchen staff at more than one restaurant.”

As hundreds of other Channel aspirants gathered in Dover for their own English Channel swims, so did Bell two weeks before the start of his window. “Without a lot of excess bioprene to keep me warm, I had chosen the September window because the Channel is typically warmest in September.

With Channel conditions forecast to be unswimmable until roughly the 18th, we traveled on the 15th to nearby Canterbury to see the cathedral. It was during lunch that day that my pilot phoned; a sudden break in the weather was forecast to begin late in the day and I should meet him at his boat at 1:30 am that very night. Attempting to sleep was a waste of time.”

Later that evening, Bell started his attempt at 1:57 am. “I swam to starboard of the boat and tracked the boat by sighting a row of glow sticks hung on the starboard railing. The pilot in turn monitored me by the two lights I wore on my suit and goggles. While the boat’s upwind position blocked the wind, it also meant breathing the engine’s diesel exhaust fumes.”

There were other problems, albeit expected. “My hands and feet were half-numb and my teeth wanted to start chattering often. Picking up the pace would have warmed me up a little, but I had to keep the pace controlled so as to have enough gas for the final few miles near France that Channel swimmers call The Graveyard of Dreams. Dropping off the pace because of exhaustion also increased the chances of hypothermia, so the right pace was critical to success. In those dark early morning hours, I looked forward to the sunrise.”

As the hours rolled by and the distance to France gradually decreased, the sun slowly made its way across the sky. Bell recalls the experience, “I saw but a few ships and mercifully never encountered any of the nasty jellyfish found in the Channel. Around noon and ten hours into the swim, the winds began to pick up. Around the same time, I saw a huge buoy 400 yards straight ahead that marked the outer boundary of the southeast shipping lane. With the strong tidal current in full swing, I passed the buoy less than ten minutes later about 400 yards to the right of it. My pilot later told me that had I been roughly 400 yards further along so that I passed the buoy on the left, my swim would have been three hours shorter.”

13 hours into his attempt, the Channel haze cleared and Bell was in sight of the French coast. “I missed the target landing of Cap Gris Nez and now had to deal with the strong tidal currents and a stiff headwind that had built up through the afternoon.” As thousands before him, Bell had to dig deep and kept strong. “I knew I would never give up so close to France. I had attempted Tampa again just a few months prior and had given up after 12 hours thanks in part to nausea; my regret at quitting only two hours from finishing Tampa still rankled, and I kept reminding myself of this in those final hours close to France. In a way, failing a second time at Tampa helped me succeed in the Channel.”

15 hours 53 minutes after entering the Channel, Bell emerged on the other side. “All I could think of was how wonderful it was going to be to climb into the boat and finally get out of the freezing water. Although I had been up for over 36 hours, I slept little that night thanks to sore shoulders.”

After his Channel swim led to US$20,000 in donations for a local charity IM Able, Bell turned his sights to the Manhattan Island Marathon Swim. On August 1st this year, Bell joined 18 other swimmers in the annual circumnavigation of Manhattan Island. “I had an experienced boat pilot in Tony Tarabocchia, my crew [coach] Dan and [wife] Eszter, and a fantastic kayaker in Mike Passow. With the urban skyline, water temperatures in the high 70s, and no salt water to cause the unpleasant salt mouth one experiences on long ocean swims, Manhattan seemed relatively easy.”

But nothing ever remains easy in a 28.5-mile circumnavigation. “We cruised into the Harlem River where the water was as flat as a millpond, passing under one bridge after another. As I passed Spuyten Duyvil and turned southwest into the Hudson, the easy cruise ended. 20 mile-per-hour winds were blowing straight up the Hudson against the tidal flow making conditions comparable to what another swimmer called a washing machine. Worse, motion sickness induced by the rough water began to set in.

I had experienced nausea and vomiting before thanks to the forced feeds, but never had the sickness lasted long. I throttled back to handle both the rough water and the constant dry heaving and did my best to just keep swimming. Those first three hours in the Hudson were three of the longest in my life. Conditions finally calmed down somewhat about an hour from the finish. My boat pilot executed a couple blocking maneuvers against a couple of errant boaters, and my kayaker was rock solid despite the stiff headwinds and rough water.”

Bell finally touched the finish buoy in 8 hours 6 minutes to become the 111th person in history to achieve the Triple Crown of Open Water Swimming.

“Life is an adventure, and one only regrets the chances one does not take. When I am old and no longer as active as I would like to be, I will look back and remember what an adventure these three swims were. I owe thanks to my coach Dan for training me, and to both Dan and Eszter for crewing on every major swim. But most of all, my wife Natalie offered her constant love and support though in private, she did question my sanity more than once.”