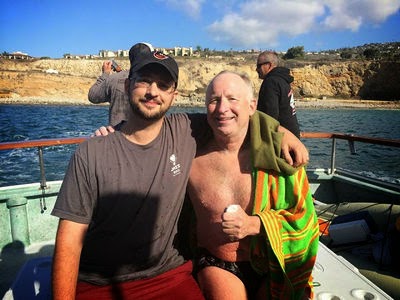 Jim Clifford became the oldest person to have completed the Triple Crown of Open Water Swimming with his crossing of the English Channel today.

“In 2014 he swam the Manhattan Island Marathon Swim. A couple months later, he became the oldest individual to complete a successful crossing of the Catalina Channel and now he has crossed the English Channel in a time of 10 hours 3 minutes.

His crossing was the fastest time in history for the swimmers over the age of 50.

Jim was 62 in 2014, only one month shy of 63 when he swam Catalina, and is now 63, one month and 3 weeks short of 64. All three swims done in his 60’s – impressive, inspirational are just a couple of adjectives to describe Jim

Clifford broke the record for the oldest person to achieve the Triple Crown of Open Water Swimming was previously held by Bob West from the La Jolla Cove Swim Club. West’s set the age record on August 9th 1996.

Photo shows Jim Clifford with his son after his Catalina Channel crossing.