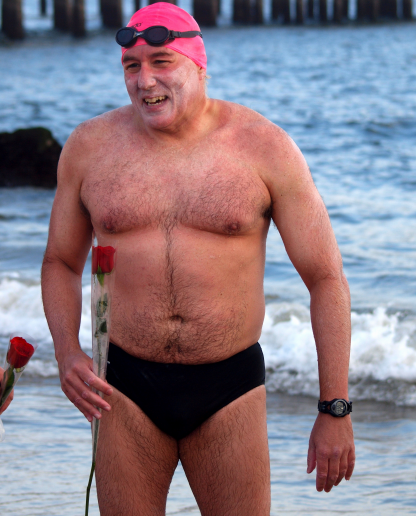 New York attorney Alan Morrison will attempt a historic two-way 24-mile crossing from the Brooklyn Bridge to Coney Island tomorrow as a charity swim. The swim’s roots go back at least 100 years.

On September 27th, the 53-year-old Manhattan breaststroking marathon swimmer will attempt the solo swim from the Brooklyn Bridge to Steeplechase Pier at Coney Island and then back to the Brooklyn Bridge. His swim is expected to take over 8 hours to complete.

“I hope to raise awareness of the Bellevue/NYU Program for Survivors of Torture.

The Program (www.survivorsoftorture.org) is the first and largest torture treatment center in the New York City area,” said the long-time supporter of the organization. “The Program provides comprehensive and interdisciplinary medical, mental health, social and legal services to survivors of torture, war trauma and other human rights abuses.”

Morty Berger of NYC Swim points out, “The double between the Brooklyn Bridge and Coney Island was done a couple times breaststroke, or a version there of, in the early 1900’s. It was organized by the Lifesaving Society at the time that was done annually for over a decade. It was probably the first major annual marathon swim race in the United States, but it ran out of steam, so to speak around World War I.”

But for this year, Morrison’s double is the only charity swim along this course to be attempted. “I just want to have fun and do some good.”

Photo by Mario Burger at the end of Morrison’s 17-mile Rose Pitonof Swim in New York in 2013.