Skip to content
A Swimmer In Need Is A Friend Indeed 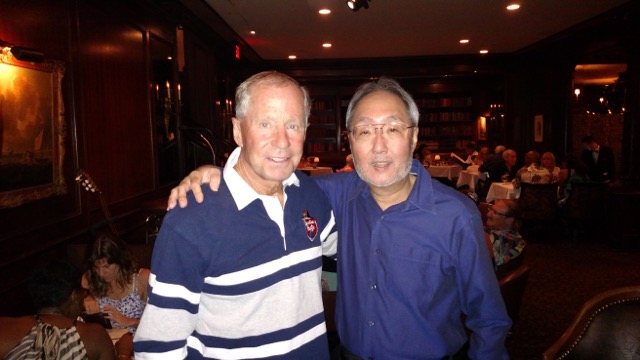 Instead of swimming from Molokai to Oahu, Dr. Harry Huffaker visited a swimming buddy, Audy Kimura.

Kimura recalls, “Conditions were just too dangerous even for an International Marathon Swimming Hall of Fame member and collegiate All-American at Michigan.”

Huffaker remembered the night that his Molokai Channel swim was called off. “When I awoke the following morning, I listened to torrential rain beating down on the roof with high winds and visibility near zero. I could barely see only faint outlines of the monstrous buildings along the beach in Waikiki.

After my swim plans were cancelled, Plan B involved getting on my Vespa scooter for a cruise through Waikiki and a stop at Hy’s Steak House to enjoy some crab cakes, sashimi and a beer while listening to long-time friend and ocean swimmer Audy sing and play the guitar which he does so well and has been doing so at Hy’s Steak House in Waikiki for 28 consecutive years.

I listened to his wonderful music and enjoyed an elegant meal in a wonderfully ambient setting. It was an effective way to get my mind off of what I was originally scheduled to do that night. We used to train and compete together in [local] ocean swims [in Hawaii]. During those miles and hard efforts, we became dear friends.”

And many years and a major disappointment [when Huffaker’s swim was cancelled], they still are.