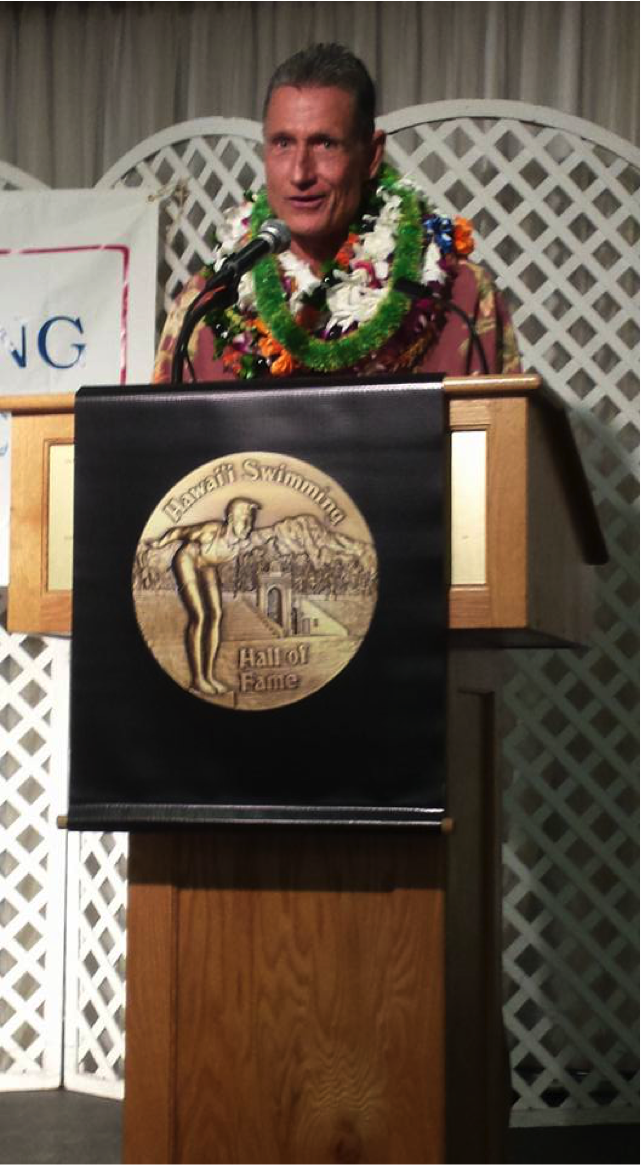 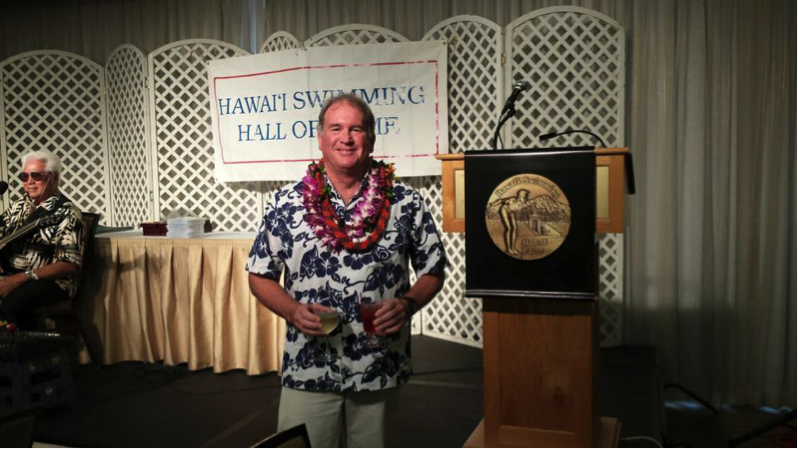 With the first known attempted channel crossing happened in 1939, it was only the beginning of a new era.

When Keo Nakama accomplished his crossing of the Ka’iwi Channel in 1969, it was the first official documented channel crossing in Hawaii that would come to draw hundreds of other long distance swimmers of all ages from across the globe. Ocean swimmers Bill Goding and Michael Miller, both residents on Oahu, were inducted into the sixth class of the Hawaii Swimming Hall of Fame on October 11th at the Hale Koa in Waikiki.

Completing swims ranging from 8.9 miles up to 36 miles, Miller and Goding were both recognized by the Hawaii State Legislature, as well as the 1st Congressional District of Hawaii by Congressman Mark Takai. We asked them about this honor.

Daily News of Open Water Swimming: What was the first thought that came to mind when you found out you were being inducted into the Hawaii Swimming Hall of Fame (HSHOF)?


Bill Goding: Knowing who has been inducted into the HSHOF prior to me, my first thought was, “What a great honor. Am I worthy enough to join such well-known, accomplished swimmers?” Some of which include Duke Kahanamoku and many Olympians.

Michael Miller: “Oh no” I don’t do well in groups.

Daily News of Open Water Swimming: How does it feel to be in the official book of Hawaii for the magnitude of your channel swimming?

Bill Goding: This feels like winning a gold medal at the Olympics, it is truly that special to me.

Michael Miller: It’s still new. We don’t swim “to get in.” We ‘get in’ because we swim. There is a huge difference.

Daily News of Open Water Swimming: What or who got you started in your career of channel swimming?

Bill Goding: Probably like most swimmers, I started as a pool swimmer on my high school swim team. I enlisted in the Air Force the summer that I graduated from high school. My first assignment was at Hickam Air Force Base, Hawaii. I met ocean swimmers through the Waikiki Swim Club and in 1977, six of us swam from Lanai to Maui just for fun. That started the channel swimming bug for me. Several other local swimmers had done some channels, too at that time, but not like the frequency it is done today.

Michael Miller: Ian Emberson, after coming up short twice on Ka’iwi Channel, asked me to take a go with him on it.

Daily News of Open Water Swimming: Of all the swims you have completed, which one was your favorite?

Bill Goding: My favorite is the Au’au Channel (Lanai to Maui). This channel is 9 miles, but the water is generally protected from the winds and the water is warm.

Michael Miller: Haven’t found it yet.

Daily News of Open Water Swimming: Of all your swims, which one was your hardest?

Bill Goding: By far, the Molokai (Ka’iwi) Channel was the hardest. Mainly because of the distance involved (27+ miles), trying to time the right day to go based on weather (I delayed my swim three days because of strong winds), and having to swim a good portion at night.

Michael Miller: Haven’t found it yet.

Daily News of Open Water Swimming: Have you done any of the swims you were acknowledged for, more than once?

Bill Goding: I have swum the Au’au Channel 17 times. I will be doing it again in January 2016. I also swam the Kaulakahi Channel (Kauai to Niihau – 17 miles) twice, but only got credit for doing it once. Channel rules are very strict. The first time I was 25 yards from finishing and standing in knee deep water. There was no beach, just big crashing waves and razor sharp coral heads. It was impossible to get on land without being cut to shreds. I swam it again two years later and was able to get on shore and got credit for the swim.

Daily News of Open Water Swimming: Any particular reason they were done more than once?

Bill Goding: The Au’au Channel was an annual solo race for 13 years; I swam in 11 of those races. The other 6 times were just for fun. Due to an unfortunate accident, the solo race was discontinued.

Daily News of Open Water Swimming: Are there any swims you have achieved that you want to do again?

Bill Goding: I enjoy doing the Lanai to Maui swim so much (and have done so 16 years in a row) that I will probably do it every year at least once until I am no longer able to or a shark eats me.

Daily News of Open Water Swimming: Are there any new channel swims you are interested in attempting in the near future?

Bill Goding: I am not built to do cold-water swims, so all my channel swimming will stay in Hawaii. There are only 2 of our 8 channels I have not swum. Maybe – someday. One is really long (Hawaii to Maui – 30 miles) and one is short (Kaho’olawe to Maui – 7 miles), but you need special permission to be on Kahoolawe, which authorities will not grant.

Daily News of Open Water Swimming: Do you have any advice for those who are considering channel swimming?

Bill Goding: It definitely isn’t for everyone. I have several pool swimming friends who freak out when they get into the deep blue and can’t see the bottom or can’t see the black line. There is a passion (both mentally and physically) for those who like to swim channels. I’d suggest reading “Open Water Swimming” by Penny Lee Dean. For information on the Molokai channel, consult our website: http://molokaichannelswim.blogspot.com/. Commit to training with friends to keep you motivated and break the tedium of those long swims. Do a trial night swim and practice feeding at sea instead of getting out on land with a rest period. Research weather, including surf, wind, tides but remain flexible since Mother Nature is in charge.

Michael Miller: Don’t ‘consider’ it, do it.

Daily News of Open Water Swimming: What kind of marine life have you seen or encountered or have been stung by?

Bill Goding: I have seen dolphins, manta rays, jellyfish and a few sharks. You can pretty much count on getting stung by something when doing a channel swim, whether it is “no-see ‘ums” (sea lice) or Portuguese man-o-war. Depending on the severity of the stings, they are usually more of an annoyance than a show stopper. I have escorted other swimmers who have been stung so severely, that they had to get back in the boat for medical treatment.

Michael Miller: The most harmful encounter had nothing to do with marine life, otherwise, all kinds of marine life. A friend of mine and myelf, were swimming off Waikiki when we were run over by a motorboat. A few of my toes were almost sliced off, but nothing compared to my friend, who almost had his arm completely severed. I held his arm against his body tightly and swam us in closer to shore where we were able to get help from a surfer who helped my friend get into shore. Other than that, I have seen a Great white shark in kelp beds in La Jolla when training for a channel swim. Man-o-war is routine swimming in Kailua Bay. Other dangers I’ve encountered include kite surfers, outrigger canoes, kayak, SUP, wind surfers, Hobie cat sail boats, to name a few.

Daily News of Open Water Swimming: How many sharks have you seen in the ocean?

Bill Goding: I have seen 3 sharks on all my swims. Most are “drive-bys” checking you out. Nothing, so far, has been threatening.

Michael Miller: 6-8 total in ocean swimming career. One was bigger than a car, seen off of Hawaii Kai, training for Molokai in 1979.

Daily News of Open Water Swimming: What is more impressive to swim near: a whale or a pod of dolphin?

Bill Goding: I have never swum close enough to a whale to see it in the water. I have swum in pods of dolphins, close enough to touch, which is pretty special because of how sleek and fast they are. You realize how small and slow you are compared to those magnificent creatures.

Daily News of Open Water Swimming: Has anything ever happened to you, in or out of the water that had you question your channel swimming career? Or anything that almost scared you to stay out of the ocean?

Bill Goding: Nothing severe enough has happened to me to keep me out of the water. Obviously, I know what can happen, but accept that challenge. We have recently had a rash of shark attacks in Hawaii, which has heightened my awareness, but it is their home, and I have great reverence when I enter the ocean.

Michael Miller: Nothing at all.