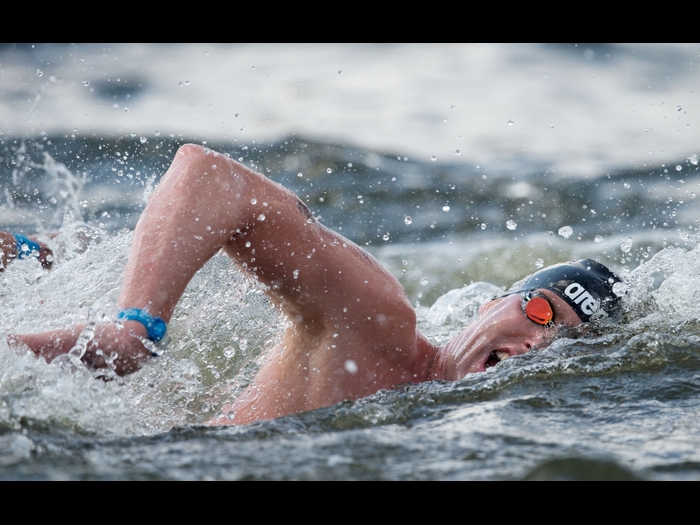 Christian Reichert won the 2015 FINA/HOSA 10K Marathon Swimming World Cup for the first time in his career. It was a satisfying victory for the 30-year-old from SC Wiesbaden.

But he has some big shoes to fill next year. The now-retired Thomas Lurz has represented Germany very well in the first two editions of the Olympic 10K Marathon Swim, earning a bronze medal at the 2008 Beijing Olympics and a silver medal at the 2012 London Olympics. But with Lurz gone, Germany’s hopes for a third straight medal in the Olympic 10K fall on Reichert.

With his consistent performance over the 2015 season and his performance under pressure at the 2013 and 2015 FINA World Championships in the 5 km team pursuit*, Reichert’s hopes look good. He will attempt to qualify for the Olympic 10K race at the second Olympic qualifier in Setúbal Bay, Portugal next June.

He is nominated for the 2015 World Open Water Swimming Performance of the Year for his season-long efforts:

Christian Reichert won the most exciting FINA/HOSA 10K Marathon Swimming World Cup series in history. His battle with Allan Do Carmo started out in his favor, but he had to hold off the 2-time Brazilian Olympian with 2 top finishes in Canada and China and culminated his season with a victory in Hong Kong 10 km marathon swim on the last stroke. For the first time in his career, he stood on top of the series podium, a credit to his willingness to fly everywhere and anywhere to compete. It was a fitting cumulation to a long season in which he placed 7th in Viedma (Argentina), 3rd in Abu Dhabi (United Arab Emirate), 10th in Cozumel (Mexico), 5th in Balatonfured (Hungary), 2nd in Setúbal Bay (Portugal), 4th in Lac-Mégantic (Canada), and 1st in Hong Kong in addition to competing in Kazan (Russia) at the FINA World Championships where he won gold in the 5 km team pursuit race. For his first career World Cup series title, for his consistent high-level performance around the world, and for his dramatic last-stroke, last-second victory on the final race of the FINA World Cup, Christian Reichert’s World Cup series victory is a worthy nominee for the 2015 World Open Water Swimming Performance of the Year.

To vote for the WOWSA Awards, visit here.