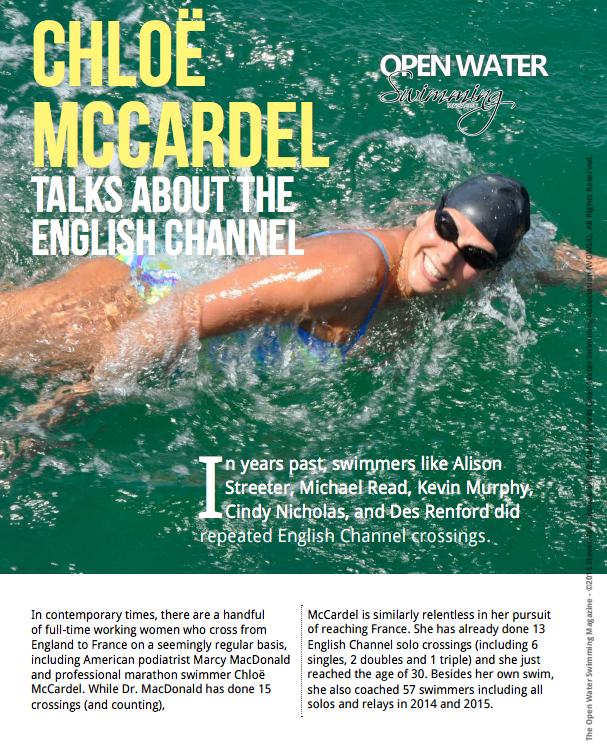 Courtesy of the Open Water Swimming Magazine, published by WOWSA of California.

Chloë McCardel may be living the life that every channel swimmer dreams of having: she swims, she is sponsored, she coaches, she gives motivational speeches.

She spends her time either training or crossing channels. Her swims are the subject of television and media interest. Her husband supports her dreams and adventures 100%. Her advice is sought the world over and she spends her time planning out logistics or escorting relay swimmers on a support boat. She is either exhibiting her talents or explaining those skills to a wide range of audiences from Down Under to Europe.

And she is never far away from any shoreline, serving as a role model to many and one of the most widely respected ambassadors of the sport.

It is a great life and wonderful lifestyle, but she has worked hard for the respect she has earned. She has faced pain like few others in the sport, often spending time in hospitals and emergency rooms recovering from her ultra-long marathon swims.

And this year was like no other in her career. Not only did she become only the fourth person in history to complete a three-way crossing of the English Channel, pushing herself for 36 hours 12 minutes, but she also coached a number of charity channel relays and did long training swims in Loch Ness.

With her husband Paul McQueeney aboard and the Brickell brothers piloting her escort boat, McCardel completed 3 solo crossings within 6 days: 8 hours 52 minutes on Monday, 9 hours 56 minutes on Thursday, and 9 hours 48 minutes on Sunday. For her 115 km (63-mile) triple crossing of the English Channel where she faced hypothermia and intense pain on an 11 hour 34 minute first leg, an 11 hour 8 minute second leg, and a 13 hour 30 minute final leg, she was nominated for the , for 2015 World Open Water Swimming Woman of the Year.

In addition to coaching a number of successful English Channel relays, McCardel has now completed a total of 13 English Channel crossings – including 6 singles, 2 doubles and 1 triple – all by the young age of 30.

Besides her own swim, she also coached 57 swimmers including all solos and relays in 2014 and 2015.

McCardel spoke about her own crossings and those of her relay teams:

Daily News of Open Water Swimming: What was your feeding schedule throughout the three-way crossing?
Chloë McCardel: For the first crossing and most of the second crossing, it was 30-minute feeds. 90% of the feeds consisted of GU energy gels and warmed water. After approximately hour, 20 feeds were every 20 minutes. Every 3 hours or so, I would have a solid feed.

Daily News of Open Water Swimming: What was your final meal before the start?
Chloë McCardel: Porridge and a banana, but I also had two gels before the swim start.

Daily News of Open Water Swimming: What was your first meal after your finish?
Chloë McCardel: Fried eggs, tomato and warm cheese on toast. It tasted amazing. One of the best meals I have had in my life because it was warm, filling, tasty and solid.

Daily News of Open Water Swimming: Was there ever any time during the crossings that you thought about quitting?
Chloë McCardel: The tides were unusually strong during my triple especially the landings on France for the first and third crossing. My aim was to swim a really comfortable first and second lap, but I expended a huge amount of energy just to finish the first lap – it was the strongest neap tide I had ever experienced. I was seriously unsure I would have enough energy for two more laps.

Daily News of Open Water Swimming: If so, what got you over those thoughts?
Chloë McCardel: I verbalised this to Paul my husband and support crew. He assured me that the wind was forecast to go down and the rest of the crossings should be better. The wind did go down, but the tide was just as bad for the third lap.

Daily News of Open Water Swimming: How many hours were you awake from the time you woke up before your swim and the time you fell asleep after your swim?
Chloë McCardel: About 45 hours. We didn’t know the exact date of this swim in advance so we happened to be in between accommodation during the crossing. We had booked somewhere away from Dover which was more affordable so we ended up driving around the countryside after the triple trying to find the accommodation in the dark, after no sleep, with no street lighting, no GPS and poor signage. We were lucky to find the place.

Daily News of Open Water Swimming: Did you have have jellyfish stings?
Chloë McCardel: There were a tonne of jellyfish out there, predominately in the separation zone. From late June when I started swimming my 3x singles for the season, there were masses on each crossing. I could see three main varieties. Some of them had a mild sting; some were completely painless. Yes, I got stung a few times once all over my face. It made me sneeze on a few occasions over the next couple of hours. It was the first time I have sneezed during a marathon swim.

Daily News of Open Water Swimming: The pain that you experience on all your swims, in Cuba, in the Bahamas and in the English Channel, are unfathomable to most of humanity. How can you willing put yourself through such discomfort?
Chloë McCardel: I want to achieve great things in marathon swimming and to do that you need to be prepared to take your body and mind to places were few dare to go. It comes with the territory of this sport, you know the much used adage ‘Nothing Great is Easy’. I think I will take up a nice gentle sport like golf when I retire.

Daily News of Open Water Swimming: After you finished, you returned back to your hotel in Dover. How was your skin? Was it waterlogged or sunburned or chafed in any way? How do you take care of your skin after such a long swim?
Chloë McCardel: I had mild sunburn because as of yet, I cannot find a sunscreen which lasts as long as I last in the open water. I did have some chafing sores not just because of the triple swim, but from the 3x singles earlier in the season. I used Sudocrem whilst the sores were healing and then Bio-Oil to treat the scarring.

Daily News of Open Water Swimming: How long did it take for all the soreness or pain or discomfort to completely go away and you are back to normal?
Chloë McCardel: About three weeks to feel out of the water ‘normal’. I am still swimming lightly in the pool and less frequently than usual as my joints and energy levels when swimming have not returned to normal yet.

Daily News of Open Water Swimming: You will return to the English Channel in 2016. As a solo swimmer or as a relay organizer?
Chloë McCardel: I will return primarily as a swim coach. I have a few relays and a couple of solo swimmers locked in. In 2014 I donated my time to coach 2 American relays from the cancer charity Swim Across America. They raised US$125,000. I will be doing this again for 2016 which is great.

This year I successfully coached 7 relays and 2 solos across the Channel, 43 swimmers. It was an incredible experience. It is very rewarding being part of other people’s journeys and helping them achieve their dreams. I currently have positions available in single relays of the English Channel for 2016, expressions of interest close October 25th. I will definitely find some spare time to swim a few solos next year– I love getting in there and reaching France.

Daily News of Open Water Swimming: Can you tell us about your relays? What is the theme and goal of your relays in 2016?
Chloë McCardel: Well, I guess the common theme is crossing the English Channel. But, there are different styles of relays for sure. We have two Swim Across America charity relays, a double crossing relay, a couple of single crossing relays and I hope to have a couple of school-based relays. We had a school from Geelong Victoria and San Diego USA who each sent two relays in 2015.

Daily News of Open Water Swimming: Do any of your 2014 or 2015 relay swimmers have plans to swim the Channel solo?
Chloë McCardel: Yes. One of my 2015 solo successes – Grant Callaghan – swam in a four-person relay which I coached in 2014. He found the experience absolutely invaluable for his preparation for doing his solo. And another one each of my 2014 and 2015 relay swimmers will be swimming a solo with me in the future. There are few better ways to prepare for the English Channel – it’s like a whole year and major event dress rehearsal of the training (both pool and cold water), nutrition, preparation and experience of the window, pilot and tide system whilst being in a supportive team environment.

Daily News of Open Water Swimming: Who coaches you and what kind of workouts do you do?
Chloë McCardel: I coach myself, but I work in partnership with the coaches at my swim squad in making decisions about my training. I like to swim in a good squad as I find swimming in the pool by myself quite lonely, the time drags, I find it harder to ‘push’ myself, it’s less social and it’s just less fun. Excluding cold water training in the outdoors and a few small open water swims for fun, I nearly train exclusively in the pool using interval training principals with a ‘normal’ squad who think what I do is a bit crazy… but in a good way. A common mistake of masters swimmers training for distance swimming is doing lots of long aerobic swims in the open water – quality interval training is crucial.

Daily News of Open Water Swimming: What kind of dryland training do you do to augment your swimming workouts?
Chloë McCardel: Because I work full time, I struggle to devote the amount of time I really should to my swim training and therefore as I must prioritise my swimming so dryland takes a back seat. I occasionally do yoga and Pilates – but not enough as I should. However, I do physio exercises to strengthen weak areas – especially my scapular.

Daily News of Open Water Swimming: Do you follow any specific nutritional plan throughout the year or a week before one of your major swims?
Chloë McCardel: Yes, I do. I need to carefully balance my nutrition in response to the needs of my training and what sort of major marathon swim I have coming up. For example, I wanted my weight to be the low 70s kilograms for the Bahamas swim in warm water, but I wanted to be in the higher end of the 70s for my triple crossing attempt, a cold water swim. So my energy intake was much higher leading into the triple – but I needed to make sure I did this in a healthy manner. Now I am trying to shed those extra kilos.

McCardel is nominated for the 2015 World Open Water Swimming Woman of the Year. To vote for the WOWSA Awards, vote here. Voting continues until December 31st 2015.