Skip to content
Previous Next
Surfer’s Ear With Swimmers 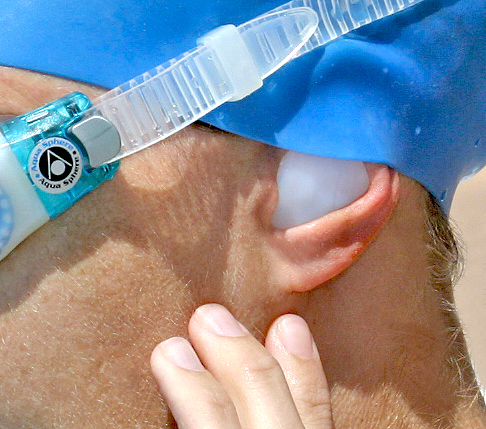 In Southern California among its surfing population, a number of surfers and open water swimmers have surfer’s ear.

Surfer’s ear is the common name for abnormal bone growth within the ear canal. See here.

Most open water swimmers avoid getting surfer’s ear, but not without protection.

Sally Minty-Gravett of Jersey says, “Many swimmers wear ear plugs. In the last few years since I have been dipping into sub-14ºC (57ºF) water, my physician advised that I should wear ear plugs. He says below 14ºC is when the problems arise.”

Dan Simonelli of San Diego says, “I agree with Sal. Surfer’s ear is everywhere. It may be more pervasive in Southern California because it’s not as cold – but cold enough for affliction – so people don’t take the precautions that others in colder areas may do.

Simonelli, who runs the Open Water Swimming Academy, always wears ear plugs for various reasons and has never had any ear problems. “Occasionally when I get a little lingering water in ear when I wasn’t wearing ear plugs such as in the infrequent pool session, I’ll use a few “swimmer drops (i.e., alcohol) to dry it up, but that’s rare.”

Minty-Gravett has been lucky to avoid ear problems. “I also never fiddle or put things in my ears – like cotton buds. I was always advised by my doctor that ears should be left to dry naturally after swimming.”

Vito Bialla of the Night Train Swimmers who swims in San Francisco Bay, around the Farallon Islands and down the cold California coast follows the same strategy as Minty-Gravett. “We wear ear plugs mostly customized by foam injection. Then a mold is made into ear plugs. It works well and keeps you from getting more cold than when water goes into your head.”

Bialla pointed out some interesting background information on how the human body can react to Mother Nature. “The body has a tendency to protect itself. Spanky Gibson had his leg shot off by a sniper in Iraq. He had to get his leg cut off three times, making a clean cut. I asked him why and he said his stump kept growing back. Nature does strange things so it is not surprised that the ear wants to protect itself as well.”

Ice swimmer Kellie Latimer recalls her bout with surfer’s ear. “I went to the clinic at work about a year ago because I thought I was getting an ear infection. After the doctor took a look in my ears, he asked if I surfed. I said no…but I swim in the harbor all year round.

He told me I have mild, but noticeable, surfer’s ear in my right ear and explained how it works. He thought it was interesting that I only had it on one side, but it actually makes sense since when I’m in open water I breathe to the right about 90% of the time. I basically funnel cold water in that one ear all the time.”

Latimer, a scientist who has participated in a number of winter swimming competitions, recalls an article written in 1942. “Van Gilse reported that exostoses in the external auditory canal are often found in cold water swimmers. In a discussion of his paper at the Collegium Otolaryngologicum in Venice in 1937, it was brought out by Italian otologists that exostoses are rarely seen in Italy.

The inference is that Italian swimmers, who usually use the warm water of the Adriatic, are not subject to exostosis to the same extent as are the Dutch, who are wont to swim in the cold waters of the North Sea or in the Baltic.

Of 25 patients with hyperostosis and 9 with discrete exostoses of the external auditory canal observed in the last three years in the office practice and in the hearing clinics of one of us, all but 4 had been ardent cold water swimmers. Two of the 4 exceptions swam on college swimming teams in heated pools.”

The introduction in the paper Surfer’s ear: External auditory exostoses are more prevalent in cold water surfers summarizes anthropologic studies that found more evidence of bone growth in the ears of civilizations closer to the coast and closer to cold water.

South African channel swimmer Theodore Yach, who recently completed his 97th crossing in the cold waters around Robben Island, knows that there are plenty of Robben Island swimmers with surfer’s ear.

Ice swimmer Nuala Moore of Ireland has encountered many who have had surfer’s ear in the cold waters surrounding her native land. “As a child I would have had reoccurring ear infections and severe pain. I have visited an Ear, Nose and Throat technician on three occasions and would not swim without earplugs now. I would say that maybe our water temperatures [in Ireland] are not that variable so maybe our body doesn’t have as much adaptation.

Effective earplugs are so valuable now. We probably associate the pain with the cold to the head through the ears. The majority of people I know are ardent ear plug people and or solid large swim hats…but we suffer as well.”