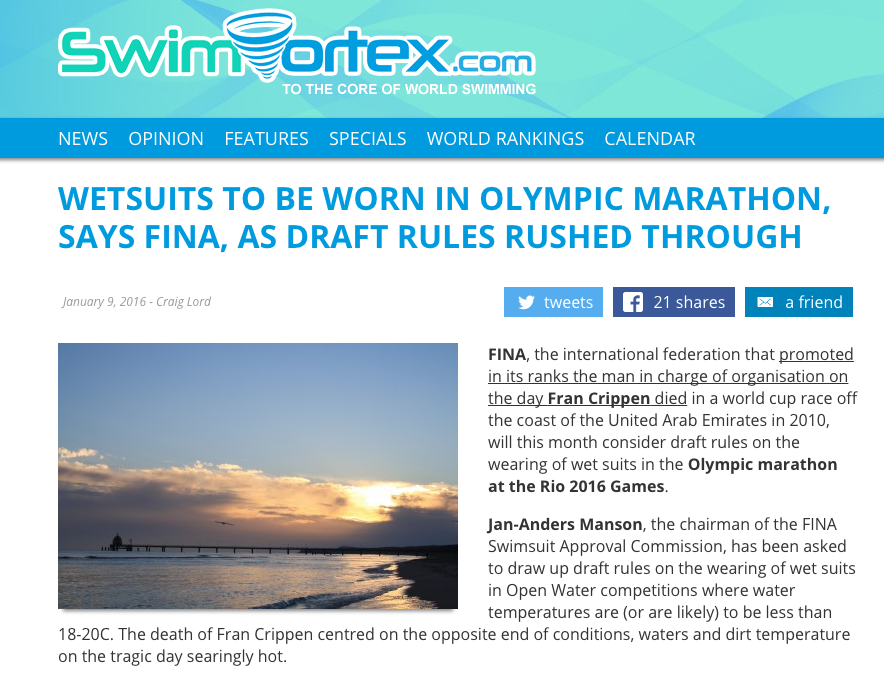 Craig Lord of SwimVortex broke the news that FINA is considering use of wetsuits at the 2016 Rio Olympic 10K Marathon Swim (see here).

Lord reported that FINA will consider rules that will allow wetsuits to be worn during the Olympic 10K marathon swim in Copacabana Beach.

Apparently, the reason for this rule change is safety.

FINA, the International Triathlon Union (ITU), and the International Olympic Committee (IOC) consider water temperatures less than 18ºC – 20ºC (64.4ºF – 68ºF) to be unsafe. Lord writes, “FINA’s leadership will meet in Budapest on January 30 to consider the new ‘wetsuit’ rules given that water temperatures off the coast of Rio during the Olympic Games are likely to be lower than 18ºC).

Cornel Marculescu, the director of FINA, has informed federations that, in the wake of the research, ‘the only solution is to allow the use of wetsuits’.”

In our opinion, the recommendations of the ITU and FINA’s appointed experts are off-base for the following reasons: 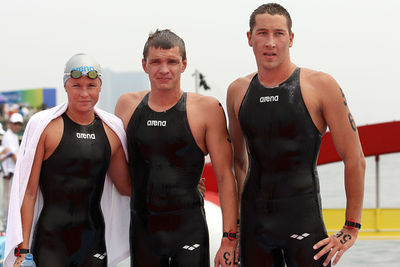 1. 100% of the Olympic 10K Marathon Swim finalists will wear tech suits that will almost completely cover their body with the exceptions of their arms.

These tech suits offer a significant level of skin protection and even a level of warmth that is not available if the swimmers swam in traditional porous swimsuits.

2. If FINA would like to make a change, why are they not considering allowing the swimmers to wear two swim caps in the open water competitions like FINA swimmers can wear in pool competitions?

6. In the event that wetsuits are approved, this changes the nature of open water swimming in profound ways. If 18ºC is considered too cold and potentially dangerous, who makes this determination? Will all future FINA races require wetsuits when the water temperatures are below 20ºC? While the swimming community knows and readily acknowledges that FINA’s upper limits of 31ºC is too warm, a vast majority of the swimming community knows that water temperatures in the 18ºC – 20ºC are entirely reasonable. Cool for some, but not dangerous for the elite, world-class, competitive swimmers who are professionals.

7. With few exceptions, the finalists at the Olympic 10K Marathon Swim are professional athletes. They compete for money, have sponsorships, and are supported by their national governing bodies and benefit from the guidance of full-time coaches, experienced trainers and sports scientists. Their team of supporters can easily educate the athletes on how best to acclimate and how to swim fast in water temperatures between 18ºC – 20ºC.