Skip to content
Imagine That? What A Visionary Partnership 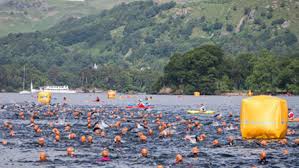 We could not imagine that two differing organizations like the United States Lifesaving Association and USA Triathlon would team up in a visionary partnership.

Its members works to reduce the incidence of death and injury in the aquatic environment through public education, national lifeguard standards, training programs, promotion of high levels of lifeguard readiness, and other lifesaving means.

A partnership between these two organizations would make sense, and the same with USA Swimming and U.S. Masters Swimming, but for various reasons these relationships are not formed.

But, as we wrote about the epicenter of open water swimming being in Great Britain (see here), such relationships make sense.

As participation increases, the partnership also aims to grow the number of qualified open water lifeguards who hold the RLSS UK Open Water Lifeguard qualification to compliment the network of more than 1,000 triathlon coaches, 500 RLSS UK lifesaving clubs and 65 RLSS UK lifeguard units who are already able to support swimmers and triathletes within an open water environment

Jack Buckner, Chief Executive of British Triathlon says, ““This is an exciting opportunity for British Triathlon to benefit from the expertise of the RLSS UK in creating safe and fun open water swimming as well as contributing to the reduction of one of the main barriers to triathlon participation. We are really looking forward to working closely with the RLSS UK and all the stakeholders involved in the governance of open water swimming to create actionable insight and ensure widespread growth of participation within both triathlon and open water swimming.”

Adrian Lole, Technical Director at the Royal Life Saving Society UK, says, “The growth of open water swimming has created an enormous demand for quality assured facilities. The partnership with British Triathlon, supporting the development of safer sites is a huge step forwards supporting safer participation. Triathlon and open water swimming is in a good place for continued growth and we are excited about this new partnership.”

This all makes sense and may influence other national organizations to work with their counterparts in the triathlon, open water swimming, and lifesaving communities.