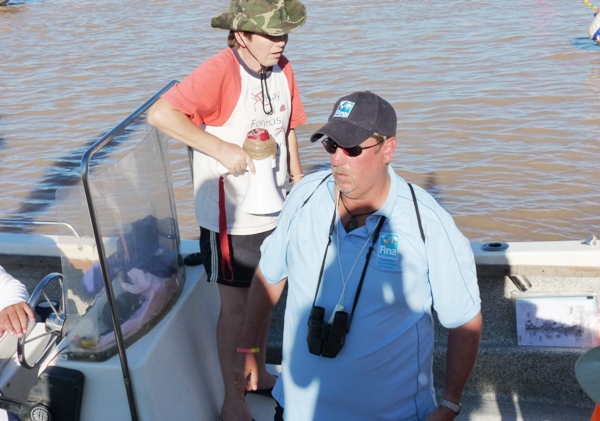 There are a lot of difficult jobs in the open water swimming world.

For example, experience and calm under pressure come into play when escort pilots are trying to stay parallel to a channel swimmer in turbulent conditions, when a coach is trying to keep a marathon swimmer going when they are feeling poorly, when a race director is simultaneously coordinating myriad activities during an event, or a lifeguard is making a rescue of a swimmer.

But the responsibilities and pressure that FINA’s John West will face on Copacabana Beach at the 2016 Rio Olympic Games will be extraordinarily significant. West will serve as the head referee during the women’s 10 km marathon swim.

Not only are the women’s competitions commonly acknowledged to be more difficult to referee than the men’s competitions, but West will also face the scrutiny of hundreds of thousands of Brazilian fans who will line up on the shores of Copacabana Beach watching their two favorite athletes – Ana Marcela Cunha and Poliana Okimoto – compete for Olympic gold.

The women, by all accounts, swim in closer proximity to each other than their male counterparts, and can hit, pull, impede, elbow and kick viciously and repeatedly in competitions. Women have experienced chipped teeth, broken ribs, bruises, and lacerations of all sorts during the international competitions.

But West, a long-time representative of New Zealand Swimming, has to make all objective sense of the aquatic scrum and inevitable physicality during the race. He will be expected to fairly dish out warning whistles, yellow cards and red cards – and quite possibly, defend his split-second decisions in heated post-race protests. He has served numerous times at many highly competitive events on the FINA 10K Marathon Swimming World Cup and FINA Open Water Swimming Grand Prix circuits.

The pressure is on, but the cool-headed Kiwi – always armed with a radio headset, whistle, list of competitors and binoculars – is up to the task.