Skip to content
Previous Next
March Madness In Uruguay 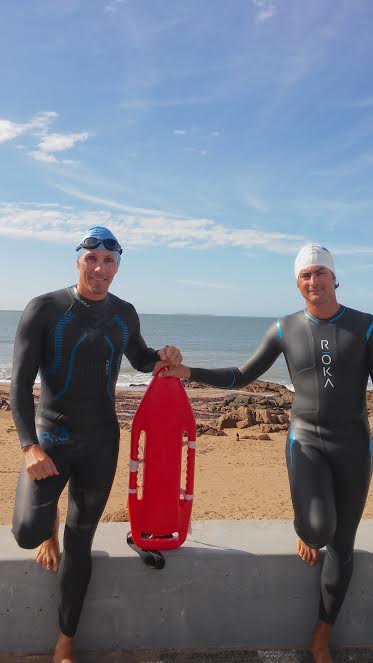 Arturo Santos and Ignacio Bussy are both 41-year-old open water swimmers from Argentina.

In March 2014, Santos and Bussy completed a 9 km triple crossing between Gorriti Island and Punta del Este in Uruguay.

Now for the third year in a row, they will attempt an unprecedented swim, a 25 km two-way crossing between Punta del Este to Isla de Lobos in Uruguay. The charity swim whose window is around March 22nd will support Socobioma.

The expected duration depends largely on the weather conditions and the currents is between 8 to 12 hours. “It is challenging mostly because the strong currents are often unpredictable as well as the orcas, tiger sharks, bull sharks and the male sea lions that can be very territorial. The Isla de Lobos (or the Island of Sea Lions) is the place of the largest population of sea lions in South America (approximately 250,000 animals).”

Last year, their one-way crossing off the coast of Punta del Este to Isla de Lobos was done at night in order to minimize the strong currents.

Socobioma (or Sociedad para la Conservacion de la Biodiversidad de Maldonado) is based in Punta del Este and focuses on marine life preservation, medical treatment of insured marine species, and re-establishment of the natural habitat. “The activities of this foundation have been practically stopped due to the lack of funds while its existence is indispensable. Last winter, we have witnessed a large number of insured or ill animals such as penguins and sea lions on the beaches of the Uruguayan coast which was caused by shipping oil leaks and spills and other kinds of human negligence. This year, we hope to attract more attention to the grave ecological problems of this area.”