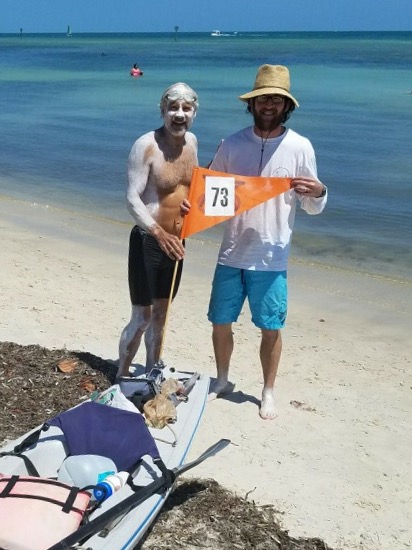 With Theodore Yach completing his Century Swim (100th crossing) across Robben Island earlier this year, and Kathie Hewko closing in on her own Century Swim across the Golden Gate Bridge, the global open water swimming community will gradually see more Century Swims accomplished over the next generation.

Floridian Bill Welzien is now up to #73 in his frequent 20.1 km (12.5-mile) circumnavigations around Key West.

Welzien explains, “My last swim around the island of Key West was back in October, 2015. My good friend Captain Don Nelson graciously kayaked for me. We began and ended at Fort Zachary Taylor State Park.

At that time, we were thinking of starting and finishing the 40th Annual Swim Around Key West at this venue. Since then, and for a host of reasons, we decided to return to the traditional site at the west end of Smathers Beach.

As I thought of my future as a swimmer, I determined my goal would be to swim my career 75th swim around Key West on the date of the Annual Swim Around Key West which is scheduled for June 4th 2016. I knew I could not get to 75 without first swimming #73 and #74

Welzien accomplished #73 on April 23rd as he was escorted by his son-in-law Don Weeks.

“Originally, I planned to swim on that Friday before, but as I looked at the weather, I opted for the next day. My biggest challenge these days seems to be finding a kayaker.

To pull the whole thing off is an investment of about 8 good hours. The swim for me is about 6.5 hours, and we have to get to the beach, zinc up, unload the kayak, de zinc after, load the kayak again, and then head home. So all told it is a good full day’s work for both the swimmer and the kayaker. Not many are so willing to invest in my goal to add completed swims to my portfolio. I have burned out many who were once eager assistants. By the grace of God, my son-in-law Doug Weeks expressed an interest to come along side of me for the 8 am start.

It was no big thing to switch from Friday to Saturday because the tidal height and depth were identical. The one difference was that I would start 30 minutes later. Friday evening was the full moon. The best tides to swim on are at the full and new moons. You have a window of a couple days before and after to find decent tidal flow. High tide in Key West Harbor was 11:06 am. That meant I would aim begin at 8:06 am.

Doug has kayaked for me several times. He is very competent. He knows the drill. This made for a quick transition from land to water. Upon arriving at Smathers Beach, we parked and rolled the kayak off the top of my van. We loaded it with my drinks (7 bottles of strawberry flavored Hammer Perpetuem) and Doug’s water and protein bars.

According to my Garmin Forerunner 910XT I took my first stroke at 8:06:04 am. The wind was out of the NW; hence, it wasn’t a factor until we neared the Harbor. The water became moderately choppy and we had a head wind. I enter the harbor at about mile 2.25.

My time improved from miles 3 to 5 due to the tidal current assist. Time would have been even better if it had not been for the head wind. I surmise it neutralized the forward progress some

The Harbor is a highly trafficked area and so Doug knew to stay very close to me from miles 3 to 5. The water temperature on this day was between 77 and 78ºF (25-25.5ºC). It was a bit cooler for this time of year due to winds we had over the past week.

I had check the cruise ship schedule and knew there were no ships scheduled to dock. This allowed to me stay rather close to the sea wall through the Harbor. Once we turned into Fleming Cut, we were free of wind. As we approached and went under the Fleming Cut Bridge, it was as if we were shooting the rapids. It was very exhilarating.

I was excited to tackle the season opener. By God’s good grace, I felt very good. Any soreness in my shoulders was the type you would expect for the first long swim of the season

He reflected upon his 73rd swim. “In all my many swims around this island, I can say that I have found none of them boring. I have always loved swimming through the mooring field and then onto Dredgers Island (Sigsbee Naval Housing). The wind was at our side at this point through miles 6-7. We headed toward the Cow Key Bridge (mile 9), and when we went under the bridge we could feel the current carrying us to the ocean. This is a mile 3 stretch. If you look at the splits, you will see that mile 10 was my fastest at 22:42.

The wind was a tail wind, and with the swift tidal current, I moved with relative ease through the water. I say relative because this is arguably the most difficult part of the course.

We looked at the water level under the bridge against the columns. We determined it was fairly high and I decided therefore to go up the middle. This can be tricky as the water begins to get very shallow as you near the Atlantic Ocean and around that curve into the ocean for the last couple of miles.

I proposed that I was not going to panic. I did enter the shallows, but it was not so shallow that my chest and thighs dragged and even touched the bottom; however, it did require a rather unique novel stroke. I couldn’t pull under me, but was required to pull to my sides. I know from experience that this stroke was only temporary. So I prayed that I would soon find water deep enough to swim comfortably.

The wind was now at my right side, but not a great factor. From the splits, my last mile was my longest time-wise with a 42:35.

Doug fed me about every 45 minutes. In the heat of the summer I drink more often as the water and air are much hotter. My finish time according to my Garmin GPS watch was 6 hours 28 minutes 38 seconds. The distance swim was 12.28 miles.

My next swim around is scheduled for May 21st. We shall see how the next one compares to the season opener