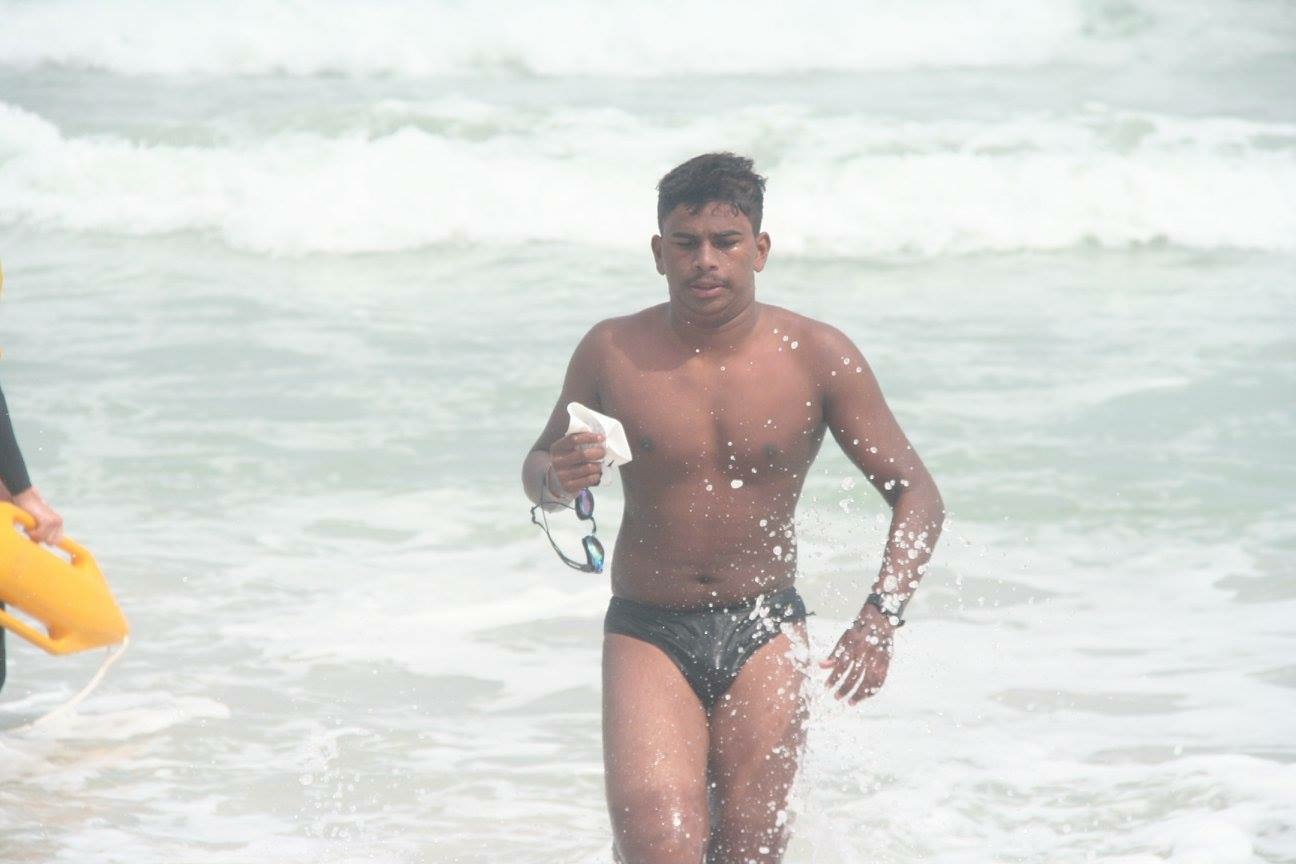 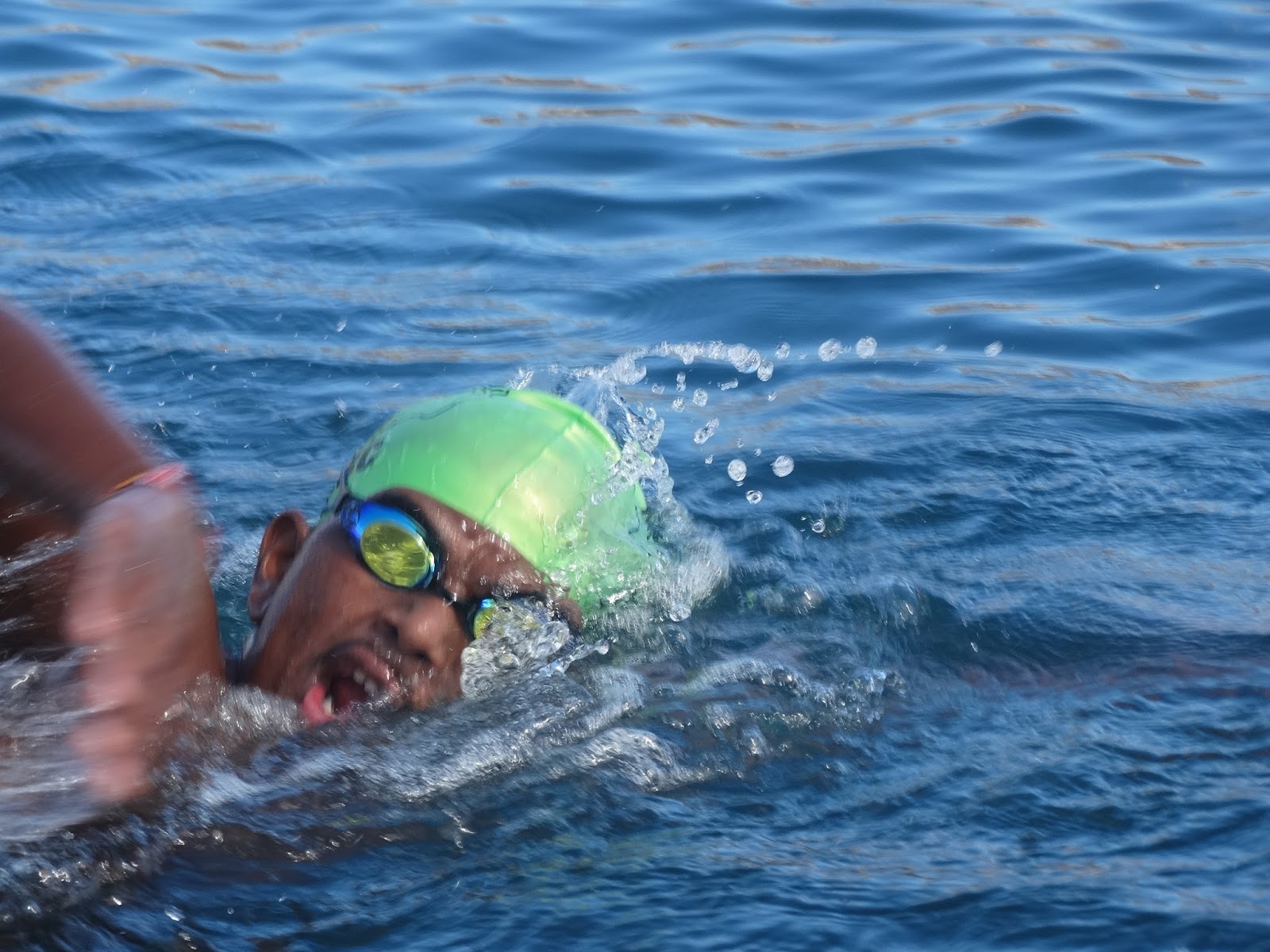 Prabhat Raju Koli, a student of Atomic Energy Junior College in Mumbai, India, has already achieved at 16 years old, what could take a lifetime for others.

Not only has he completed the 81 km India National Open Water Swimming Competition in Bhagirathi River in west Bengal and won four of five Indian competitions in the Arabian Sea, but he has also completed a circumnavigation around Jersey Island (66 km Round Jersey Solo in 10 hours 11 minutes) and a crossing of the English Channel in 13 hours 14 minutes.

But these marathon swims were a build-up to 6 challenging swims that he did in South Africa from the end of March through April.

On March 28th, he completed the 8 km Langebaan Swim in 1 hour 55 minutes from Preekstoel to Parlies in Cape Town. “The temperature of water was between 16°C and 17°C,” reported his father Rrkoli Koli. “His second swim on April 2nd was the 7.4 km swim Robben Island to Blouberg. Around 200 swimmers participated from 20 countries that took Prabhat 2 hours 2 minutes to complete. He finished in 8th place in the water between 13°C and 14°C.”

His third swim was on April 8th around the Cape of Good Hope at the Cape Point Swim. Koli recalled, “This is one of the toughest swims in South Africa. Throughout the entire year, only one or two swims can take place in this patch due to the bad weather and choppy sea. These swims are largely dependent upon the direction of blowing winds. Here swimmers started from Diaz beach in the South Atlantic Ocean and finished at Buffels beach in the Indian Ocean, the breeding place of great white sharks.

During the 8 km swim, the sea was choppy and the water temperature was 13°C to 14°C for the race organized for the benefit of cancer patients under the observation of Cape Long Distance Swimming Association. Prabhat came in second with a time of 1 hour 55 minutes. He was the world’s youngest male swimmer to complete this race and the first Indian
.”

Prabhat’s fourth swim of his South African tour was the 8 km Llandudno – Camps Bay Swim on April 13th. “It started in 13°C at Llandudno Beach and ended at 15°C. Most of the course is in the shadow of Twelve Apostles range of Cape Town so the water always is cooler than other beaches in Cape Town.

During the 2 hour 14 minute swim, Prabhat swam across lots of jellyfish, seals, sunfish and other marine life, breaking the previous record held by Andrew Chin of 2 hours 24 minutes. The Cape Long Distance Swimming Club offered a gold medal to Prabhat for breaking the record
.”

Prabhat’s fifth swim of his tour was 18 km between Blouberg, Robben Island and Melkbos on April 15th. “He faced the challenge of big waves at the start and choppy seas throughout as Prabhat came across seals, dolphins, jellyfish and other marine life. His biggest challenge, however was the cold restless sea conditions during his 5 hour 30 minute swim that was suggested by Derrick Frazer and Andrew Mitchell who crewed for him.

Prabhat took 2 hours 15 minutes to reach Robben Island, but he fell down as he stood at the bay due to a big wave. This caused an injury to his right foot, but even with the injury, he fought on for the remaining 3 hours 15 minutes to complete this swim with a great time
.”

On April 20th, Prabhat concluded his South African tour with a sixth and final swim around Robben Island. “It was a 10 km cold water swim with the water temperature varying between 15°C to 16°C.

Initially the sea was flat, but then tons of jellyfish make his swim much more difficult. Seals and penguins swam around Prabhat [see video below], but then to make a shorter circumnavigation, he swam through kelp near shore. After that, a thick layer of mist suddenly arose and the sea became choppy, but he still managed to complete the swim in 3 hours 5 minutes, making him the second fastest swimmer of this route
.”