Skip to content
Previous Next
Double The Trouble, Twice As Nice For Deirdre Ward 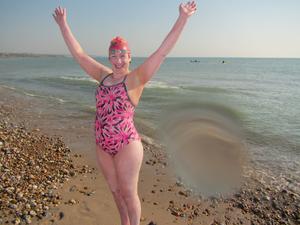 John Tierney explained the significance of Ward’s third and fourth career crossing of the Channel. “Deirdre’s swim is the 43rd two-way crossing of the English Channel in history. She is the 16th woman of 30 swimmers to achieve this distinction. [Only] 14 men have completed the same feat.“

Daily News of Open Water Swimming: What was your goal time for this swim?

Deirdre Ward: I was anticipating between 30 and 36 hours based on my previous channel times and what others swimming to France and bank had achieved. I was hoping for 30, but didn’t want to fixate on that time just in case.

Daily News of Open Water Swimming: Did you expect to swim over 24 hours?

Deirdre Ward: Oh yes! I am not fast enough to have achieved that swim in less than 24 hours. Hats off to all those who have swum it in under 24 hours including Becky Lewis who swam the same day as me.

Daily News of Open Water Swimming: At what point(s) in your swim did you hit your lowest point?

Deirdre Ward: There were two main low points in my swim, when I was nearing the end of a leg.

The first was as we were in the general area of the Cap. I had been asked to push for an hour and really had tried and was feeling tired, but still fighting current. I thought we had missed it altogether, but they seemed to still be pushing me on so I was feeling tired and confused. In reality, we hadn’t actually missed it at that point, but I was not able to fight through and we went in just above. I thought I had added hours onto my swim, but actually I had not. I was relieved once I realised that.

The second low was as we seemed to nearing the English coast. I started to fixate on the lights ahead and thought the end was much closer than it was. I decided to try really hard for an hour which just resulted in tiring me out as we were just being pushed along the coast.

Other than those points, which were probably max 2 hours total, it was a beautiful day out with blues skies during the day, clear star filled nights, stunning sunrises and sunsets and calm seas. I really enjoyed the majority of the swim and felt privileged to be out there.

Daily News of Open Water Swimming: What got you past these feelings of negativity (assuming that you had them)?

Deirdre Ward: I knew I had to just keep swimming so I tried to focus on other things. I found counting my strokes in 1-2-3 allowed me to focus back on my stroke, probably swim a bit faster and stop looking around too much.

Daily News of Open Water Swimming: How did you feel when you touched shore again?

Deirdre Ward: At the end of the first leg, I deliberately didn’t think at all, just had some water, painkillers and a jelly baby and headed back out again. When I finished the end of the of the second leg, I was a bit wobbly trying to clear water. I was directed to a promising white rock and promptly sat down and cried what I think were tears of relief. Then I felt a bit cold. I think I was actually quite numb to emotion though by that point.

Daily News of Open Water Swimming: Would you do it again?

Daily News of Open Water Swimming: If so, would you change anything?

Deirdre Ward: If I was to do it again, I think I would want a lot more information about where I was and why I was being asked to do certain things. I think this might have made it easier for me to push when required, and indeed hold back when there was no reason to push.

Daily News of Open Water Swimming: Did you have enough food and drinks to last 24 hours?

Daily News of Open Water Swimming: Was it harder physically or mentally?

Deirdre Ward: I think physically. I had prepared myself for both, but my left arm gave up before my head did.

Daily News of Open Water Swimming: What prepared you – mentally, physically, emotionally – for this swim?

Deirdre Ward: I am not quite sure how to answer this question without listing out my training plan.

I think key would be long swims – up to 20 km pool sessions in the winter and 2×10 hour swims in the summer. I think these swims prepared my both physically and mentally as I got used to the distance, but also got used to working with my mind to keep me in the water and happy in my own head. I found that this time round I was able to think about very little for a long time, keeping a bit more in the moment. On the day itself, I often just focused on the play of light on the water.

I did also plan how I thought the swim would play out based on different start times so I could identify and prepare for potential low points and planned key things to focus on if my mind wandered into sad places, such as thanking people after the swim, seeing everyone back in Dover.

There was no one thing I did, just a lot of little things that seemed to work for me.