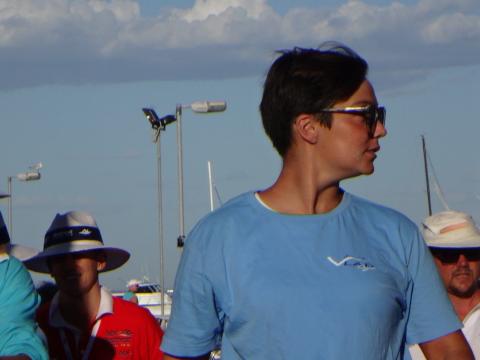 This summer, the New York Open Water trio of David Barra, Rondi Davies, and Alex Arévalo are carrying on the tradition of swimming around Manhattan Island in New York City.

While Robert Dowling completed the first 28.5-mile (45.8 km) circumnavigation swim of Manhattan in 1915 in 13 hours 45 minutes, there have been numeous celebrated and undocumented swims around the most densely populated island in America in the 10 decades since.

Most recently, the Manhattan 20 Bridges Swim had its first circumnavigation and will have its second race tomorrow.

The New York Open Water trio is carrying on the legacy built by Morty Berger of the NYC Swim that was built upon the legacy of Tom Hetzel Ph.D., Drury Gallagher, and Julie Ridge.

Hetzel had an incredible streak between 1967 and 1977 when he successfully completed 8 crossings of the English Channel in 10 years. Between 1980 and 1984, he completed eight solo swims around Manhattan Island. During this latter period, Hetzel co-founded the Manhattan Island Swimming Association together with Gallagher.

The MISA was later run between 1982 and 1991 by Ridge who swam the first double circumnavigation of Manhattan Island in 1983.

Hetzel, Gallagher and Ridge were all later inducted in the International Marathon Swimming Hall of Fame.

Hetzel and Gallagher were childhood friends in Rockaway, Queens. Hetzel knew about Gallagher’s loss of his oldest son and convinced him that a swim around Manhattan Island would be a source of consolation over the death of Drury Gallagher Jr.. “Sometimes, it takes the exertion of swimming in a new and different environment, perhaps even dangerous to take a swimmer’s mind off a personal crisis. Swimming places you in the here and now quite literally: take the next stroke; take another breath; rhythmically repeated until exhaustion.”

Gallagher established a memorial swim around Manhattan on July 19th 1982, to honor his son. He swam around the island in 7 hours 14 minutes. When Tim Johnson asked Gallagher to establish a second swim, he replied, “Come on down next month, we’re having a marathon.”

After the first swim, Gallagher began the arduous task of creating an organization that would endure. He needed escort boat captains and a set course for future generations. He needed volunteers and governmental permits. It was not easy. The Department of Health ruled that swimming in the waters around Manhattan Island was prohibited – and this ruling was supported by the New York Police Department. The Harbor Pilots Association position, supported by the City Council, was to prohibit swimming in the waters around Manhattan.

But the second Manhattan Island swim went on as planned on July 14th 1983 as a benefit for Little Flower Children’s Association. Johnson, another honouree by the International Marathon Swimming Hall of Fame, obtained permission from the United States Coast Guard and filed a nautical parade permit that was issued after assurances that each swimmer was to be accompanied by boats equipped with a marine radio.

“We settled on what is now called the East Side Greenway trail at 96th street. It was at this point that the organization and the Park’s Department began a partnership.”

But in Manhattan Island, there was always another agency’s objections to face and overcome.

The New York Police Department took issue with the swim. “As the swimmers approached the Battery, the NYPD Marine division asked us to pull the swimmers from the water because we were not permitted. Drury intervened and insisted that they call the United States Coast Guard. Based on the permit we had from the Coast Guard, we were able to continue the swim,” recalled Johnson.

Behind the scenes, Johnson found out that the issue of allowing the swimmers to carry on went all the way up the U.S. Coast Guard chain-of-command. Finally, the Admiral decided, “Let ‘em swim.”

Johnson explained the continuation of the event. “For the third annual swim because of the close association that Drury had with the Police Commissioner, another member at the New York Athletic Club, we incorporated the Police Department in the permitting process. They became our friends ever since. They were the lead boat for the third swim in 1984.”

The 1984 event was highlighted by a post-race banquet where the swimmers discussed celebrated the emerging iconic swim.

The swimmers benefitted from a computer model that was developed by Johnson in 1982. “The reigning world professional marathon swim champion, Paul Asmuth, tested my hypotenuse that the outcome of a swim is based upon what time in the tide cycle the swimmer entered the water, the speed of the current, and the location of the start. Drury knew that the success of the swim relied upon getting good press and setting records was what publicity was all about.

After Paul became the first person to break 7 hours on August 7th 1983, swimming around Manhattan in 6 hours 48 minutes, he took a half hour off the record.”

But Gallagher was always up for another challenge. He wanted to break Asmuth’s record and set the date for his attempt on September 7th 1983. “We decided to send off two swimmers to break the men’s and women’s record. This was to verify another characteristic of the computer program was not yet noticed: a delayed start would put the swimmer in a faster current, but possibly jeopardize their rounding of the Battery as the flood would start in the Hudson before they entered the East River. Up until 1983, every swim had started at the time ebb current began. Sally Friedman went one hour after ebb started while Gallagher went two hours after ebb began. It was risky because no one had ever started this late in the tide cycle. Both finished in record times: Friedman in 7 hours 1 minutes with Gallagher finishing in 6 hours 43 minutes. Later the women’s record was broken by Diddo Clark in 6 hours 52 minutes on October 7th 1983.

Ridge also recalls those early years. “We were a tight, strong, hard working crew. It was all about the love of swimming, sharing it with the greatest of athletes from all around the world and having a safe, pleasurable day.”

Morty Berger recently posted on the NYC Swim [see here], “After serving the New York community for over twenty years, the founders of NYC Swim decided to, with mixed emotions, hang up their caps and goggles.

Organizing open water swims has always been a labor of love, and it is time to pass the proverbial baton to the next generation. In 1993, when Drury Gallagher and MISA decided to close up shop after a decade of service, our merry band of volunteers stepped up to fill the vacuum as we could not imagine the annual Manhattan Swim disappearing from the calendar.

And now, swimmers in our region and around the world are fortunate, that New York Open Water has chosen to do the same and will continue to organize the swim around Manhattan under its own banner.

At the height of our group’s popularity, swimmers were afforded the opportunity to swim around the Statue of Liberty, Governors Island and of course, Manhattan. They could swim down the Hudson as part of the Little Red Lighthouse Swim; across the East River under the Brooklyn Bridge; and to Sandy Hook as part of the Ederle Swim.

When we first began, swimming in New York’s waterways was considered a laughable activity often met with much consternation. Now as we depart, the NYC metropolitan area is served by numerous groups which organize river based events annually. If you wish to experience New York from a completely unique perspective, then please check the following organization that schedule events annually, including but not limited to: CIBBOWS, NYC Triathlon, New York Open Water, New Amsterdam City Swim, River Pool at Beacon, Urban Swim, and Lady Liberty Sharkfest Swim.

Why are we leaving the open water stage? After twenty plus years of missing family events, seeing dear ones pass and having key members of the team having to focus on their personal health challenges, it was time to close the book. With so many open water swim options available and more being planned on the horizon, our community’s hunger for swims will easily be satisfied.

A huge thanks to the fantastic volunteers who have assisted over the years; the events and the participant memories would not have happened without your assistance and amazing support.

It was a great run.

Gallagher gave an acceptance speech at the United Nations during the International Marathon Swimming Hall of Fame induction ceremonies in 2010 where he talks about the early days of the Manhattan Island swim.