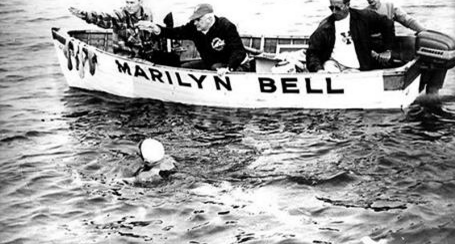 The Northwest Open Water Swimming Association (NOWSA) is a non-profit corporation in the state of Washington that promotes interest in swimming in Pacific Northwest waters (including the states of Washington, Oregon, Idaho).

Andrew Malinak and his colleagues on the NOWSA Board of Directors (Wendy Van De Sompele, Jerome Leslie, Melissa Nordquist and Scott Lautman) bestowed an Honorary Lifetime Membership upon Marilyn (Bell) Di Lascio who crossed the Strait of Juan de Fuca in 1956 on the day of the 60th anniversary of her crossing as heartfelt gratitude for the inspiration she has given to Pacific Northwest swimming community.

“60 years ago today, an 18-year-old from Toronto, Canada named Marilyn Bell swam across the Strait of Juan de Fuca,” posted the Northwest Open Water Swimming Association. “Two weeks prior, Marilyn was pulled from the water part way between Victoria and [her] destination of Port Angeles. She was hypothermic, but living in a world which did not yet have a name for the condition.

She spent the next few days training, and watched Amy Hiland swim into Victoria, becoming the first female to cross the Strait.

On her second attempt, Marilyn knew she needed to do something different. To keep herself motivated, she changed the route. Now aiming for Canada, she’d be swimming home. That’s the thought that got her across. Swim home.

Today, the Strait of Juan de Fuca remains an extraordinarily challenging swim, with water temperatures rarely above 50°F (10°C), temperamental weather, and fast currents. The success rate is about 1-in-10. A hard swim then, and a hard swim now.”