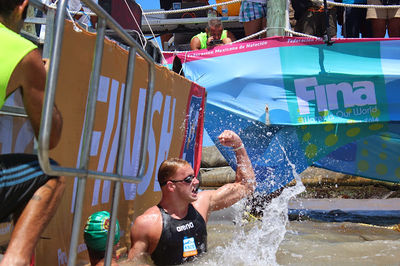 It is nearly impossible to accurately predict the medalists in the Olympic 10K Marathon Swim at the 2016 Rio Olympic Games…but some athletes are ideally prepared to swim the race of their lives and capture gold.

One of those athletes is the powerful and savvy Dutch swimmer Ferry Weertman from Eindhoven.

1. His track record of success on the international stage. Not only has he alway been competitive in every competition he has participated on at the elite level, but he finished second at the 2015 FINA World Swimming Championships.

2. His composure and inner drive. Despite the pressure of the Olympic Games, he has a down-to-earth mellow personality and experience with the logistics and expectations of an international competition.

3. He can adapt to all racing situations. Weertman is never out of contention in any race. He has won races by surging with others or initiating surges himself from the front.

4. He can come out on top in any all-out drop-dead sprint against his top competitors – from 50 meters out or 500 meters out.

4. He is comfortable racing in lakes and seas, but especially in rough conditions – and Copacabana Beach may present the most turbulent conditions that his 24 competitors will have faced.

5. The water temperature, either cold or warm, will not bother him. He is comfortable in all weather, wind and water conditions.

6. He is comfortable in the surf, waves, and ocean swells. He understands the dynamics of the ocean which will be extremely important if Copacabana Beach is wavy and turbulent.

8. The power, resources and logistical operations of the powerful Dutch team is behind him.

9. He is big and can handle any kind of physicality on the course – but he is also savvy enough to avoid yellow and red cards.

10. His coach Marcel Wouda, who has coached others to gold at the Olympics, is a strategic thinker and has put together an excellent Plan A and alternative Plan B and Plan C.