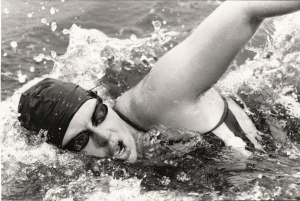 “Coming as it will after the Rio Olympic Games,” says ISHOF Chief Executive Officer Bruce Wigo. “We believe that it will provide a great opportunity to promote swimming and the new Santa Clara Community and Recreation Center, which will be our new home.”

Wigo briefly described the background of the two marathon swimmers. “Russian long distance swimmer, Larisa Ilchenko has won eight World Championships and gold at the 2008 Olympic Games at age 19. She has dominated long distance swimming since her first World Championship in Dubai in 2004, where, aged just 16, she won by over 30 seconds. She won the gold medal at the 2008 Beijing Olympic Games in the 10 km, using her trademark closing kick after being behind the leaders for 9,900 of the 10,000 swim.

Monique Wildschut, a tall and powerful swimmer from the Netherlands, was the six-time World Professional Marathon Swimming Federation champion from 1983 to 1988. In 1983 she was the overall winner of the Atlantic City Marathon and was second overall in the 64 km Traversée Internationale du Lac St-Jean in Canada. As a solo swimmer, she crossed the English Channel twice and had the fastest swim of the year in 1984.

Desmond Robert “Des” Renford, M.B.E., was born in Australia on the 52nd anniversary of the very first English Channel swim, achieved in 1875 by Matthew Webb. He took up marathon swimming only at the age of 39 and from 1975 to part of 1980, he crossed the English Channel 19 times in 19 attempts and wore the title King of the Channel, which is accorded the swimmer with the most crossings. For his exploits in the Channel, he was awarded the MBE, Order of the British Empire. Australians remember their Channel swimming sporting legend, who died in 1999, through the Des Renford Aquatic and Leisure Center in Marouba, a suburb of Sydney. He will be enshrined posthumously

The International Marathon Swimming Hall of Fame will hold its 2016 Induction Ceremony also in California on November 4th (see here).