Skip to content
A Giant Of The Sport, Joe Grossman 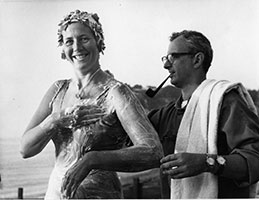 Much of the information in the Marathon Swimming Hall of Fame and Openwaterpedia on marathon swimmers before the 1980s is based on the work and records of Joe Grossman.

Steven Munatones says, “He is a giant in the sport of professional marathon swimming in the 20th century.

Joe was tireless, he was relentless. His passion and attention to detail was extraordinary. There was nothing involved or related to open water swimming that did not fascinate him or interest him: pilots and prize money, pacing and pioneers, sponsorship and safety, history and hydration.

Due to his profession as a public information officer, he was able to travel globally. He used these opportunities to create a global network of like-minded race organizers and sponsors. His efforts directly led to increased prize money for athletes, but also even more importantly, an equitable distribution of that prize money
.”

Grossman was inducted in the International Marathon Swimming Hall of Fame in 1979 as an Honour Administrator.

“He used his professional talents and devoted innumerable hours to administer, organize and promote marathon swimming. He was instrumental in the formation of the World Professional Marathon Swimming Federation and served as its Honorary Secretary beginning in 1961.”

He left an invaluable 900+ page unpublished book of detailed information that formed the basis of the initial data included in the International Marathon Swimming Hall of Fame and Openwaterpedia. “Without this documentation, much of the history of the sport of professional marathon swimming would have not made it to the 21st century. He provided an independent, third-party source of information and documentation that complimented the dedication of the swimmers, devotion of the coaches, and objectives of the sponsors and race committees.”

Grossman is shown above applying channel grease to Greta Andersen before an English Channel swim.