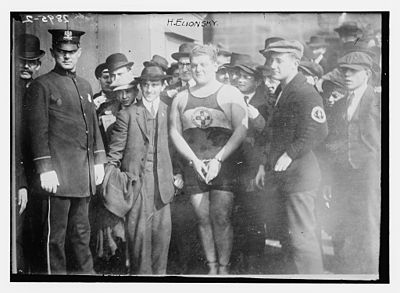 Courtesy of The Sun, New York.

We enjoyed reading the unique style and tone of the article, written nearly 100 years ago that was brought to our attention by members of the Marathon Swimmers Federation.

Elionsky set a long distance swimming mark yesterday that was said to be a record for a woman when she swam around Manhattan Island, covering forty miles in 11 hours and 35 minutes. The swim was supposed to be a race between herself and her brother, Henry Elionsky [shown above in a 1913 photo], known as Buster because he weight 230 pounds and looks it. But it was hardly a race because Henry was shackled hand and foot, his favorite mode of natation.

Miss Elionsky and her brother raised the level of the water almost perceptibly at the Battery when they jumped off at 6:45 in the morning and splashed in the direction of the Statue of Liberty. They were shepherded by a rowboat containing entirely superfluous life guards, while behind came a sloop filled with reporters and the inevitable movie men.

Miss Elionsky shifted from the Australian crawl at times to the one arm trudgeon, but her brother just wriggled. Henry, who has been called the human iceberg, regularly submerged after the manner of a submarine, reappearing, after the onlookers had given up all hope, to blow like a whale.

The swimmers furrowed their way up the East River with a sharp current slapping their faces until they reached Hell Gate, where the undertow and the heavy tide swung them from their course several times and made them realize they were on serious business. Passing through Spuyten Duyvil Creek they entered the North River at 12:05, where Miss Elionsky trod water to let her brother catch up and avoid any hard feelings.

They went from there to the Battery, completing the last leg at 6:10, with the girl in the lead by several yards. They were both strong enough to take nourishment when they finished. In the summer of 1915 Robert W. Dowling, the young son of Robert E. Dowling, president of the City Investing Company, made the same swim as far as Seventy-ninth street, when his father ordered him out.”

It was certainly a remarkable tandem swim done 100 years ago, however it was described in print of the day.