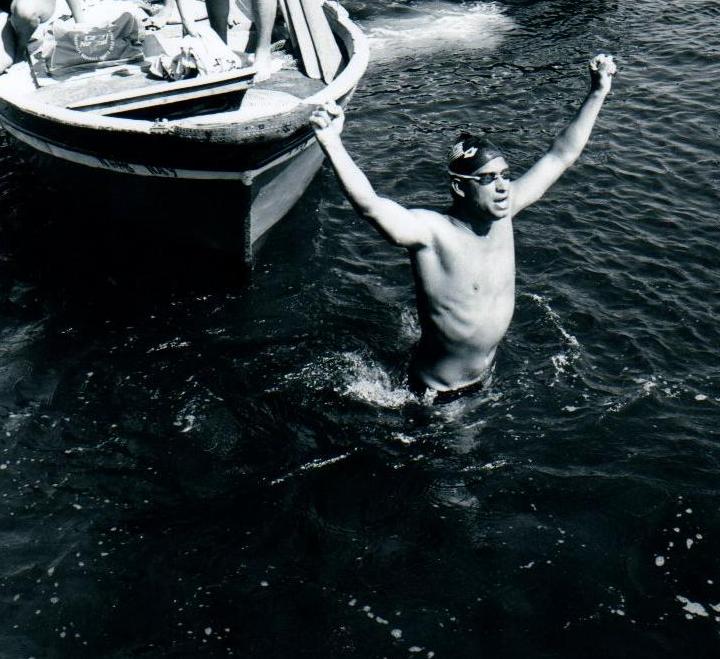 The 35th edition of the Maratona del Golfo Capri-Napoli in 1990 has been a signature race for decades. But the 1990 race was a showcase event that pitted 18 swimmers against each other who ultimately became inductees – Honour Swimmers – in the International Marathon Swimming Hall of Fame.

American David Alleva is shown above winning the Maratona as well as the 1990 professional marathon swimming series, but he was chased by a truly global all-star field.

The International Marathon Swimming Hall of Fame is now implementing its rule about swimsuits. So if a swimmer wears jammers or any kind of techsuit, this runs counter to the rules of the IMSHOF. That is, to be considered for eligibility, men can only wear swim briefs made from a permeable material that does not offer thermal protection, buoyancy or protection from the elements and shall be sleeveless and legless.*

Because nearly all the top professional marathon swimmers wear jammers or tech suits nowadays, those swimmers are not eligible to be considered for consideration or nomination to the Hall of Fame.

While there are some IMSHOF Honour Swimmers like Larisa Ilchenko, Maarten van der Weijden, Petar Stoychev, Angela Maurer, Britta Kamrau, Fran Crippen and others who are currently in the Hall of Fame, but who wore swimwear outside the acceptable rules of the Hall of Fame, contemporary swimmers like Oussama Mellouli, Trent Grimsey, Éva Risztov, Martina Grimaldi, Pilar Geijo, Ferry Weertman, Sharon van Rouwendaal and all the other top professionals fall outside the acceptable IMSHOF rules and cannot be nominated, unfortunately in my opinion.

So this 1990 Maratona del Golfo Capri-Napoli race in Italy was very unusual and was a historically significant race that included 18 of open water swimming’s most notable athletes.”