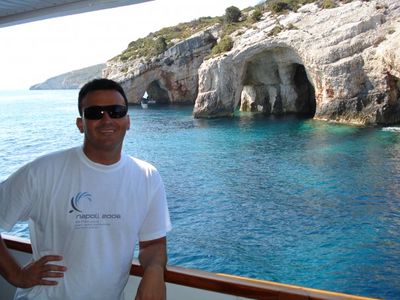 Tomi Stefanovski will be formally inducted in the Class of 2016 at the International Marathon Swimming Hall of Fame ceremonies in Southern California in November.

“When I think of Tomi, I think of him as a model athlete who represents all that is good about aquatics,” said Steven Munatones. “He is a multilingual ambassador who represents what is the best among open water swimmers.

The former water polo player is a 45-year-old extraordinarily competitive professional marathon swimmer from Macedonia who has competed on the FINA/HOSA 10K Marathon Swimming World Cup and FINA Open Water Swimming Grand Prix circuits for years. After six shoulder surgeries and four decades of competition, Stefanovski still has enough left in his tank to finish on the podium in the world’s longest and most competitive marathon races.

At the age of 42, he won the 2013 Traversée internationale du lac St-Jean and came back in 2014 to tie for first in the most exciting and unexpected finish in the 60 years of the Traversée. Even at the age of 45, he still finished third in the Traversée, considered to be the toughest race to win on the professional marathon swimming circuit.

Stefanovski was nominated for the 2013 World Open Water Swimming Man of the Year and the only person to compete all 7 marathon races on the 2014 FINA Open Water Swimming Grand Prix circuit where he finished second overall – this came an incredible 20 years after he won his first major international race at the 19 km Jarak-Šabac Marathon Swim in Serbia in 1996.

But racing is not all that he does. He crossed the English Channel in 2009 in very fast 7 hours 42 minutes.

From a historical perspective, Stefanovski topped all these accomplishments when he won the 2016 FINA Open Water Swimming Grand Prix circuit, tied with a man 20 years his junior.

Stefanovski swims powerfully and swiftly right through the cold, the wind, the waves, jellyfish and the inevitable challenges of marathon swims around the world…all without complaints or excuses.

From 57 km and 88 km races in Argentina to the famous 36 km Maratona del Golfo Capri-Napoli, Stefanovski has set the standard for marathon swimmers for decades. He does it with a genuine smile, a deep appreciation for all volunteers, and a gentleman’s demeanor. Stefanovski is well-respected globally and an individual who you would want as a friend, swim buddy, and neighbor. A father of two beautiful young girls, you definitely want him on your team and in your boat.

So it will be my pleasure and honor to introduce Tomi Stefanovski of Macedonia as a member of the International Marathon Swimming Hall of Fame Class of 2016.”