Skip to content
Stephanie Hopson Believes On Her Journey To France 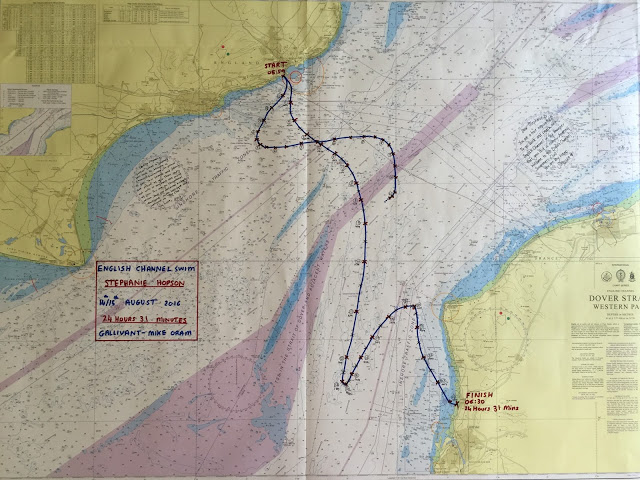 Stephanie Hopson is a 39-year-old American open water swimmer and a member of the 24-hour Club.

On CNN (posted here), she explained her dramatic two-stage attempt to cross the English Channel this summer.

During her first attempt of the English Channel, her escort boat ran into a crab pot and buoy lines that got tangled around her boat’s propeller. As a result, her swim was aborted. She did a reset and then later successfully crossed the English Channel in 24 hours 31 minutes.

Daily News of Open Water Swimming: What was your goal time for this swim?

Stephanie Hopson: When I first had the idea to swim the Channel, the number I had in my head was 21 hours. I have no idea where that number came from, but it was the number I started with.

Later as I trained and based on my swimming speed, I figured if given the best conditions, it might possibly be 16 or 17 hours. So for a long time the estimated time I gave myself was 18 hours. I think I took 16 and 21 and landed somewhere in the middle. I remember tracking Susan Daley‘s swim in July of this year and when I saw her land 23 hours 28 minutes, it dawned on me that my swim could very well take 24 hours. I was in awe of her swim and endurance.

When I left for England, I remember telling friends this could take between 16-24 hours depending on where I was with the tides. I gave myself a very big window in my head. I wanted to be as realistic as possible as to how long this could take so that I was mentally and physically prepared for the endurance.

Daily News of Open Water Swimming: Did you expect to swim over 24 hours?

Stephanie Hopson: I knew it could be a possibility. I knew that Jackie Cobell had the longest swim in 28 hours 44 minutes. Incredible!

Daily News of Open Water Swimming: At what point(s) in your swim did you hit your lowest point?

Stephanie Hopson: Towards the very end, I’d say somewhere around hour 22 or 23. The last 2,000 yards were the longest yards I have ever swum in my life.

I was trying to come to terms in my head of how this story would end if the swim was aborted this close to France. I could see it, I could feel it, but I wasn’t sure exactly how we were going to get there. I was making very minimal progress towards the end and I could tell for some time that we were essentially swimming parallel to the French shore. I started to figure out that the tide must be pushing us down the coast of France.


Daily News of Open Water Swimming: What got you past these feelings of negativity?

Stephanie Hopson: Quitting was never an option. Towards the end of the swim, I remember telling Mike Ball that the swim was going to end in two ways, either we were reaching France or they were going to have to pull me out.

I told him that I was not quitting. Those last 2,000 yards…in all honesty, it’s not even like I swam those, but rather, it felt like the love, encouragement and support I had from so many friends was pouring in, and getting me to France. I like to say WE swam to France because it felt like a collective effort, not just mine.

I could feel the encouragement from my friends and also from the amazing people on the Gallivant: Mike Oram, Tanya Harding, Mike Ball, Sarah Tunnicliffe, John Tierney, and Chely Wright.

Crewing for 24 hours is no joke and they have all my respect and thanks. The love and belief on that boat was beyond anything I’ve ever experienced.

I also thought of the encouragement from my friends who had crewed for me on my first attempt just a few days prior: Travis Trussell, Patrice Patrick, Jessica Carroll and Nancy Lao. I knew they all believed in me, and whenever I had an ounce of feeling tired, I thought of them and everyone that was rooting for me and believing in this dream along with me.

I had an incredible amount of support coming in from friends and family. I’ll tell you what changed the course of the swim…John support-swam with me towards the end of that swim and I have to say it felt like he saved the swim for me. This had to be about 22 or 23 hours into the swim.

I remember him looking at me and saying – YOU are GOING TO FRANCE. He said it with so much authority and belief, I couldn’t help but be swept up in his words of encouragement. He knew it and I knew it: this journey was ending in France.

He also said something to Nick Adams before we left that morning. He said – “I’m returning with a Channel swimmer”. Those words rang in my head. Channel swimmer. I just thought of all the training I had done and what an incredible journey this had been. I thought of fellow swimmers who I have met along the way who all told me the same thing – just swim feed-to-feed and keep swimming until you hit the sand. Their advice kept repeating over and over in my head…just keep swimming.


Daily News of Open Water Swimming: How did you feel when you touched shore again?

Stephanie Hopson: I felt incredible when I touched the shore in France. I remember Sarah was behind me. I had shouted to her to ask if I could start to stand up when the water was shallow enough, and she said yes…I literally at that point wasn’t sure if I was supposed to swim all the way physically up onto the beach or if I could actually stand up. So sure enough, I stood up and I remember walking in. There’s that moment when you are on land, but you are still in water and then that moment when you are completely on dry land. That moment was beyond any words I can use to describe it. Everything went silent in my head and I was just so calm and thankful…extremely thankful.

Daily News of Open Water Swimming: Would you do it again?

Stephanie Hopson: I can’t yet figure out how to answer this one…but, never say never. For now though, I’m pretty darn happy having done it once.

Daily News of Open Water Swimming: If so, would you change anything?

Stephanie Hopson: I wouldn’t change anything. Although I’m now working even more on my technique, so who knows?

Daily News of Open Water Swimming: Do you have enough food and drinks to last 24 hours?

Stephanie Hopson: I did. I had done the S.C.A.R. Swim in April of this year and I ran out of feed on the first swim. Lesson learned. I think I packed enough feed to last over 30 hours in the English Channel.

Daily News of Open Water Swimming: Was it harder physically or mentally?

Stephanie Hopson: That’s a tough one. I guess for me, I’m going to go with physical. But the swim is totally a mental swim. I think at some point your body just goes into automatic mode.

Daily News of Open Water Swimming: What prepared you – mentally, physically, emotionally – for this swim?

Stephanie Hopson: I first attempted the English Channel on August 9th 2016. A rope from a fishing pot got tangled up in one of the boat propellers and the swim had to be aborted, 11 hours in. We had reached French waters. Without realizing it beforehand, it’s like I got the world’s best training swim under my belt just a few days before I would ultimately reach France.

August 9th helped me to prepare mentally, physically and emotionally for the swim. I had the amazing opportunity to crew for Nick Adams and for Guy Batchelor for both of their solo swims in 2015. Those swims taught me so much. I learned so much from both Nick and Guy.

Nick mentored me through this whole process and I know I’m a better swimmer for it. I think the journey itself from first deciding to swim the Channel to actually standing on the shore in England, and all of the experiences and training swims that I did helped to prepare me in all ways for the swim. I gave myself permission to dream this big dream…and I believed. I believed with everything I had that I could reach France. I thought about it every day for 2.5 years of training. I was mentally dialed in and I think that helped more than anything.