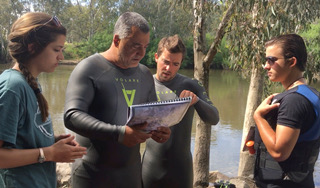 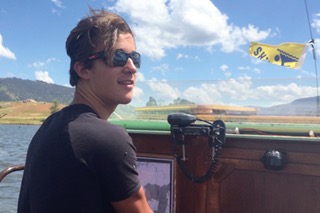 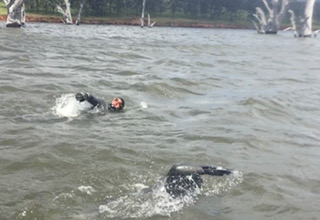 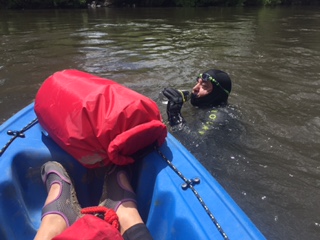 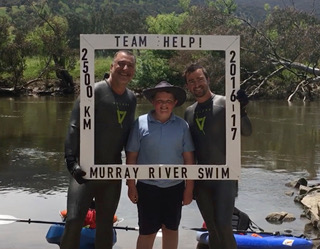 At the 184 kilometer mark along their stage swim in the Murray River in Australia, Americans Eric Helmick and his 25-year-old son Hunter Helmick are a bit behind planned schedule.

“But we are excited and feeling like super heroes as we tackle the Hume Weir which spans almost 70 kilometers along the River Murray,” described the 54-year-old father as part of their Take Your Dream campaign.

The River Murray is Australia’s longest river at 2,508 km. The team of Eric and Hunter with younger (16) brother and logistics coordinator Tuck Helmick left Corryong, Victoria 10 days ago in 12°C water.

“We were anticipating reaching the Southern Ocean in less than 106 days. [But] we’re a novice team. No one on our team has ever attempted anything like this before or participated in anything this big.”

Eric and Hunter are swift water rescue swimmers and are proud of the team they put together. “I wouldn’t have anyone else on my team than the people I have hand picked.”

Eric is co-founder of Team Help! and affiliate Help! World Tour working hand-in-hand together with his sons, Hunter and Tuck. “Doing something epic – like swimming along Australia’s longest river – inspires people. Inspiration brings hope. So we’re doing something epic. In the process, youth and communities are finding hope – believing anything might be possible.”

They announced the winners of their Take Your Dream Essay Contest that was created to actively engage the youth of Australia during the swim and encourage them to share their own dreams with others. The winners will be included in Team Help!’s feature film documentary, Take Your Dreams, which features the Helmick’s 90-day stage swim where they swim an average of 28-30 km per day.

“The essays we received from students along the Murray River were awesome,” says Terry Helmick, Eric’s wife of 33 years.

“When you believe in someone else’s dream, suddenly they think…maybe it really is possible. We’re excited to play a part in other’s dreams and passions.”

“We’re not promising to make dreams come true; there are a number of excellent organizations that do that. We are simply stating that if you want to explore your dream, you need to be passionate about it, define it, explore it, and take it,” said Eric.

Father and his two sons are from Idaho Springs, Colorado where they sold everything, including their home – and travelled to Australia with the specific goal of inspiring youth. “100% of donations [to Team Help!] go directly to the cause of raising up youth and strengthening families,” said Eric.

They have used their swift water training and experiences in Colorado along the route. “Self rescue, hypothermia, SIPES, fatigue – all
of them are possible, but no one has to drown or be injured if we’ve done our job up front,” says Eric who filed an extensive Emergency Action Plan and Risk Assessment with the parks and recreation departments along the Murray River so they too understand the risks and efforts the team is attempting.

“An endurance swim is not really my life’s dream,” admits Hunter, an illusionist who has performed around the world. “But doing something epic that inspires others to live big, is.” Hunter will travel back up along the Murray River on a tour of his musical Help! after the downstream swim is complete. “We roll into town like a circus, the team disperses for a few days and does volunteer-service work in the community, inviting everyone to the show – and then at the end of the week we set up our tent and show and perform for free. It’s free so that everyone can enjoy it. Many of the communities we visit are small aboriginal communities that would generally never have something like this come to their city.”

Two other people have swum down the River Murray prior to the Helmick’s Take Your Dream challenge. In 1993, Graham Middleton of Corryong, Australia swam 2,336 over 138 consecutive days. Then between November 2000 and February 2001, Australian professional marathon swimmer Tammy van Wisse spent 106 days in her solo stage swim of 2,438 km along the River Murray.

The Murray rises in the Australian Alps, draining the western side of Australia’s highest mountains, and then meanders across Australia’s inland plains, forming the border between the states of New South Wales and Victoria as it flows to the northwest into South Australia. It turns south at Morgan for its final 315 km, reaching the ocean at Lake Alexandrina.

The water of the Murray flows through several terminal lakes that fluctuate in salinity and were often fresh until recent decades, including Lake Alexandrina and The Coorong before emptying through the Murray Mouth into the southeastern portion of the Indian Ocean.

Because of the nature of the landscape including national forest and private land, there is not always access to the shore or their crew following on shore. “The support crew is prepared to spend 3–4 nights at a time on the river and catch up with the shore crew days later.
Shires, communities and schools along the Murray River have been notified of our event and were given a preliminary schedule of our expected arrival in each city. It’s more about us as a team believing in people than it is about them cheering us on.”

To participate as a donor for the Take Your Dream campaign, contact [email protected]. For more information, visit www.takeyourdream.com.