Skip to content
Previous Next
Howard James, First One In, Last One Out 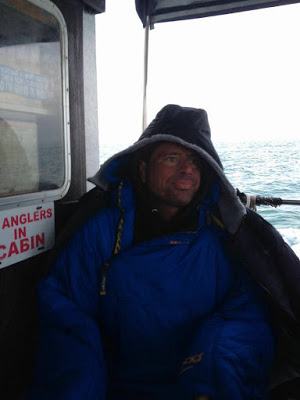 Howard James (née Keech) has that undeniable look of a channel swimmer: a look of determination and intense focus coupled with a sense of adventure and a dash of unbridled joy.

James did the improbable. James accomplished the unprecedented. James opened and closed the books on the English Channel crossing season this year in an historically unparalleled fashion.

On May 16th, James completed the earliest crossing of the English Channel, previously held by Kevin Murphy of May 29th. He broke the record by 13 days.

Yesterday, he completed his year with the latest crossing of the English Channel during this 2016 season.

On November 3rd, James set an English Channel swimming record in water temperature of 14ºC (57.2ºF) during his 11 hour 38 minute crossing from England to France. He broke the old record by 6 days, previously held by Michael Read, President of the Channel Swimming Association, who swam on October 28th 1979.

In both cases (earliest and latest record-setting swims), James was escorted by pilot Andy King under the auspices of the Channel Swimming Association.

Photo above shows James’ North Channel crossing; his May crossing with pilot Andy King is shown below where he initially missed the Cap Gris-Nez towards the end, but eventually fought back across the tidal flow and landed onshore in France.