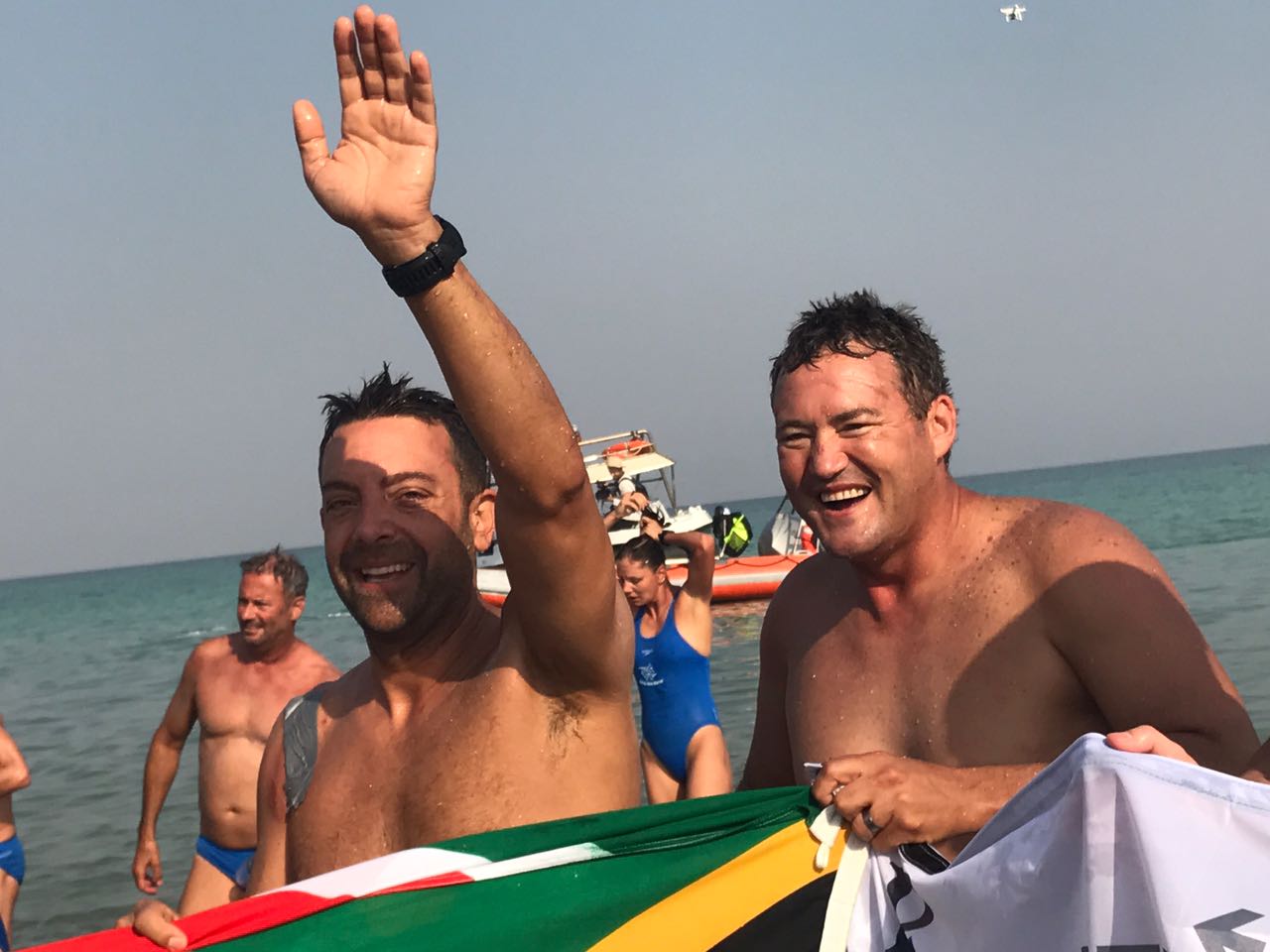 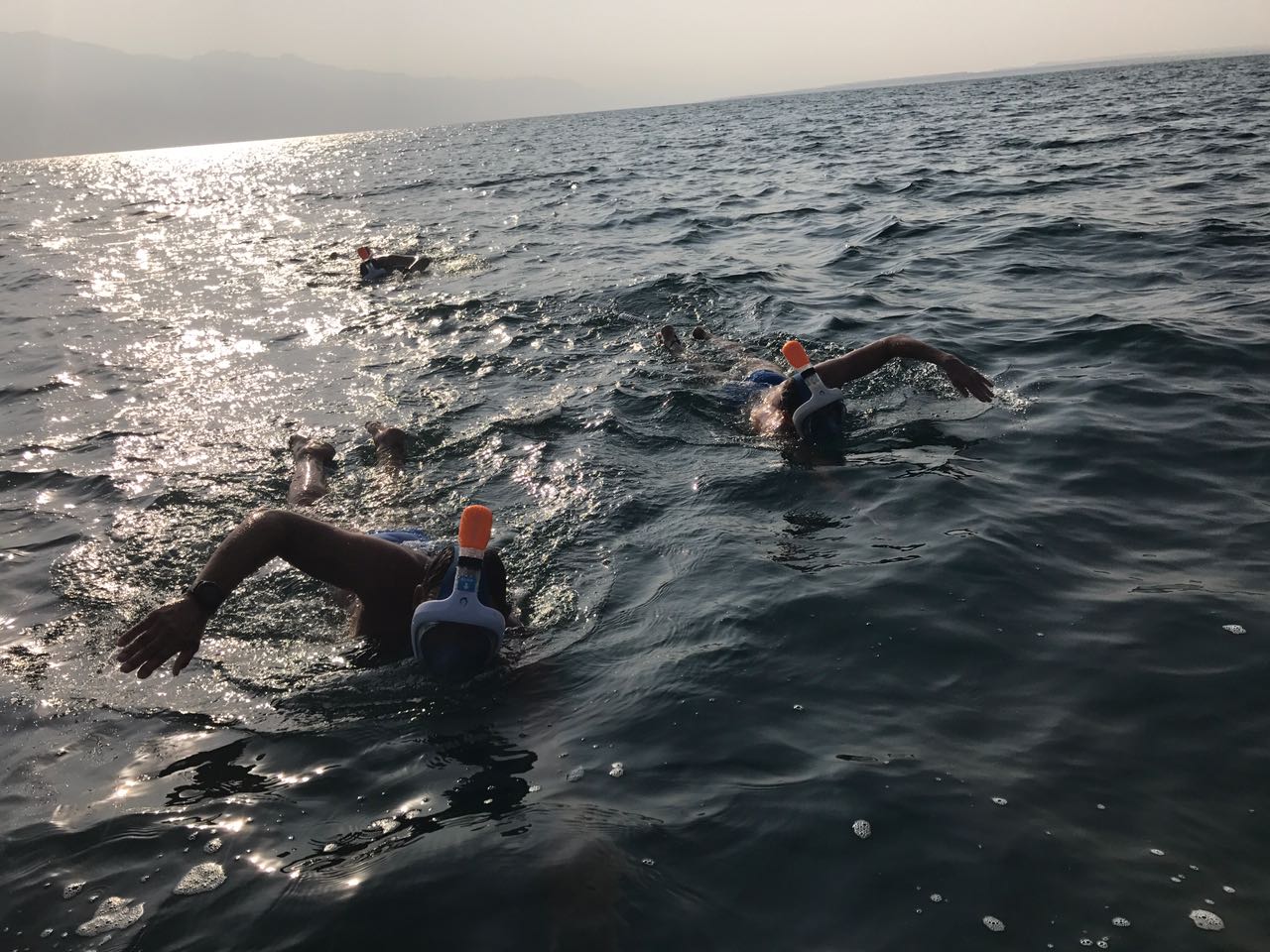 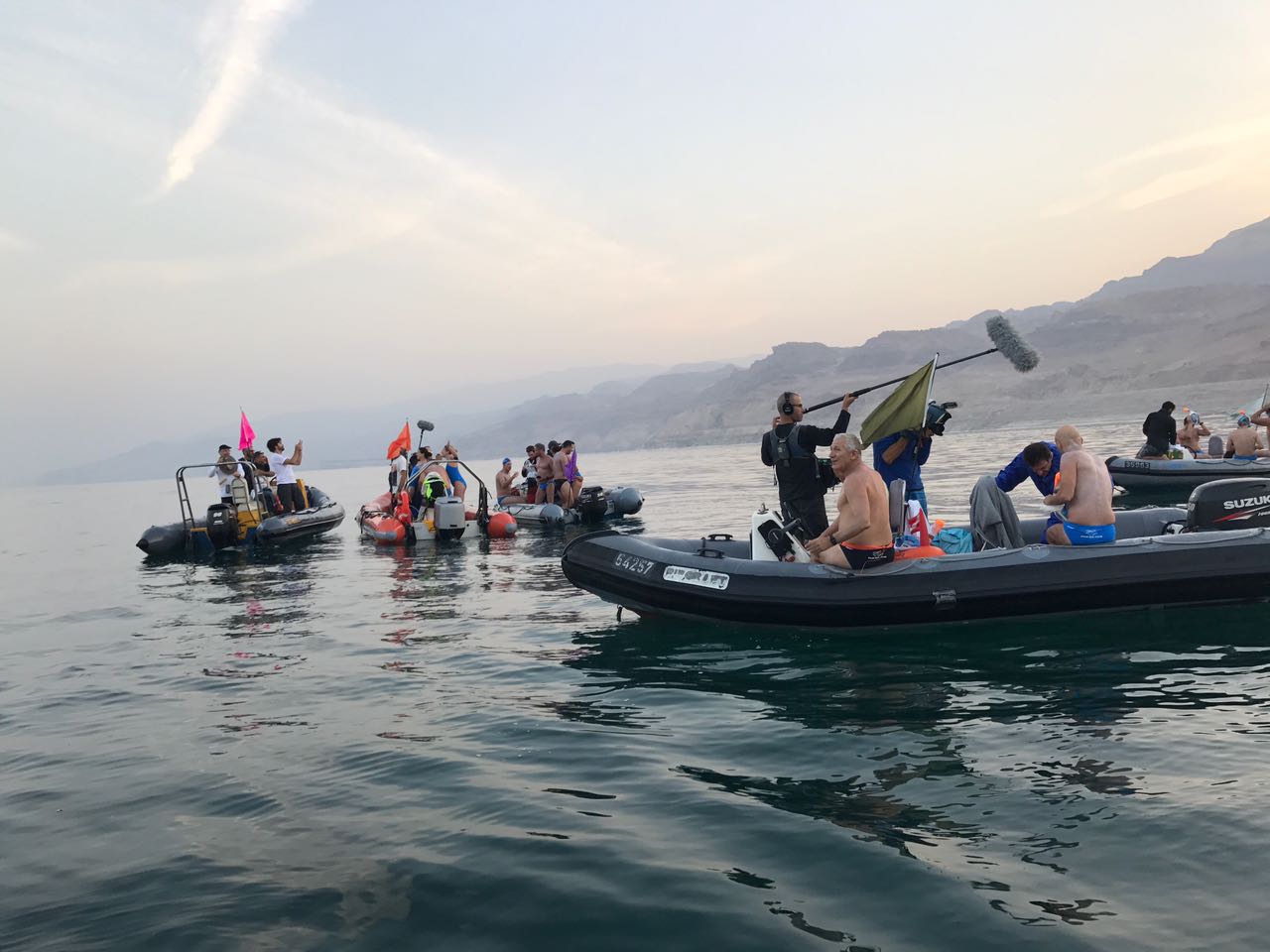 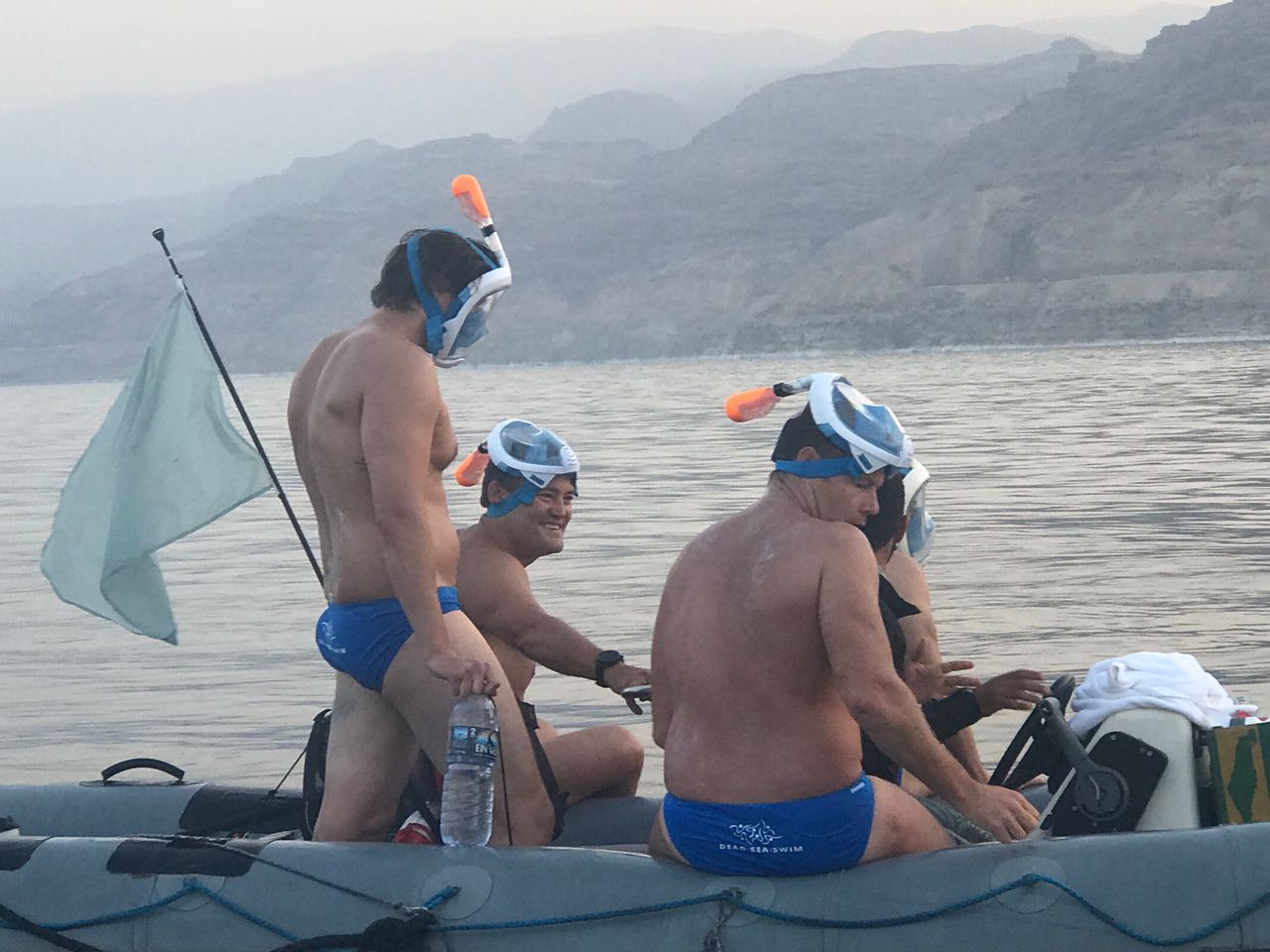 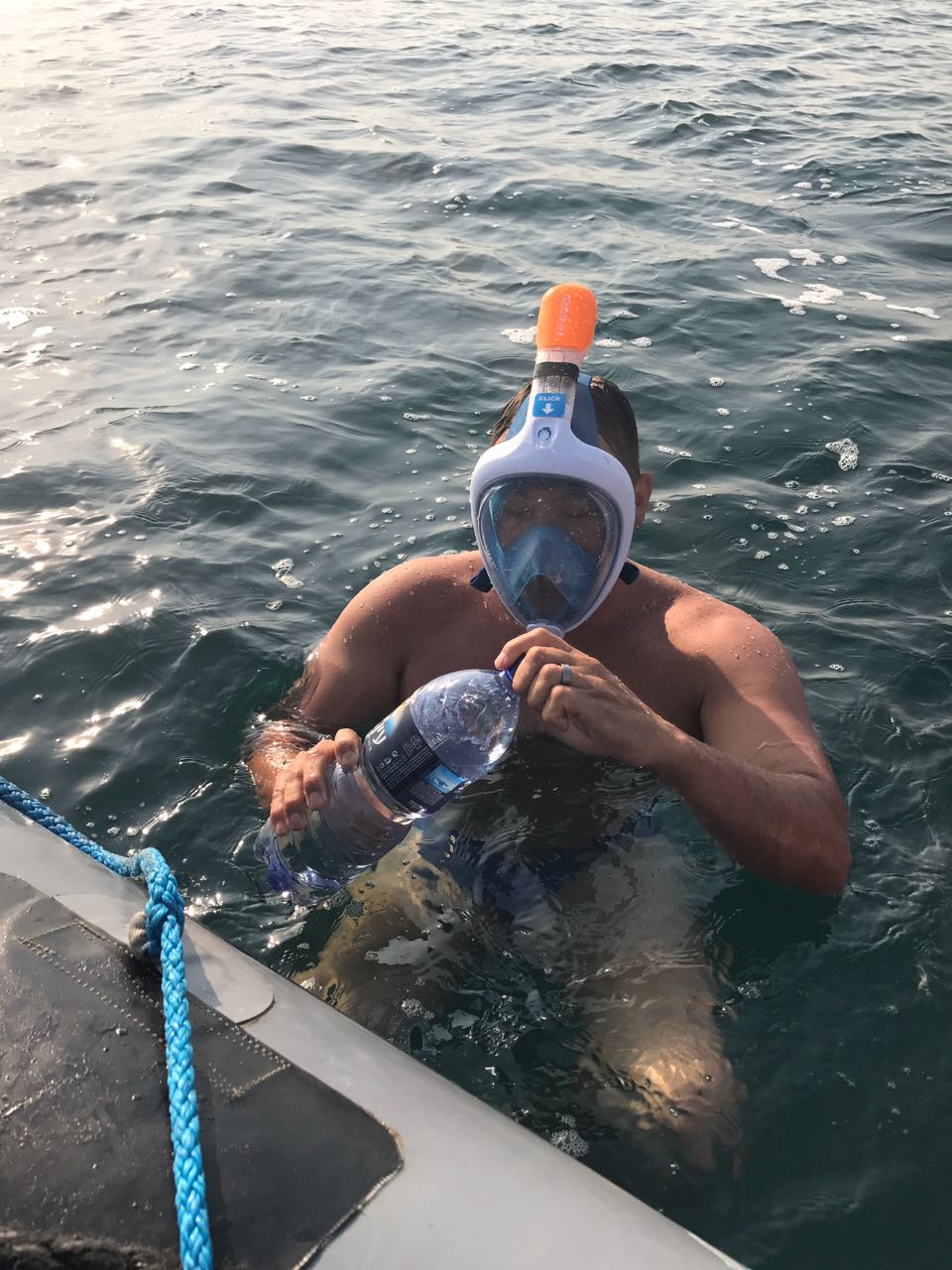 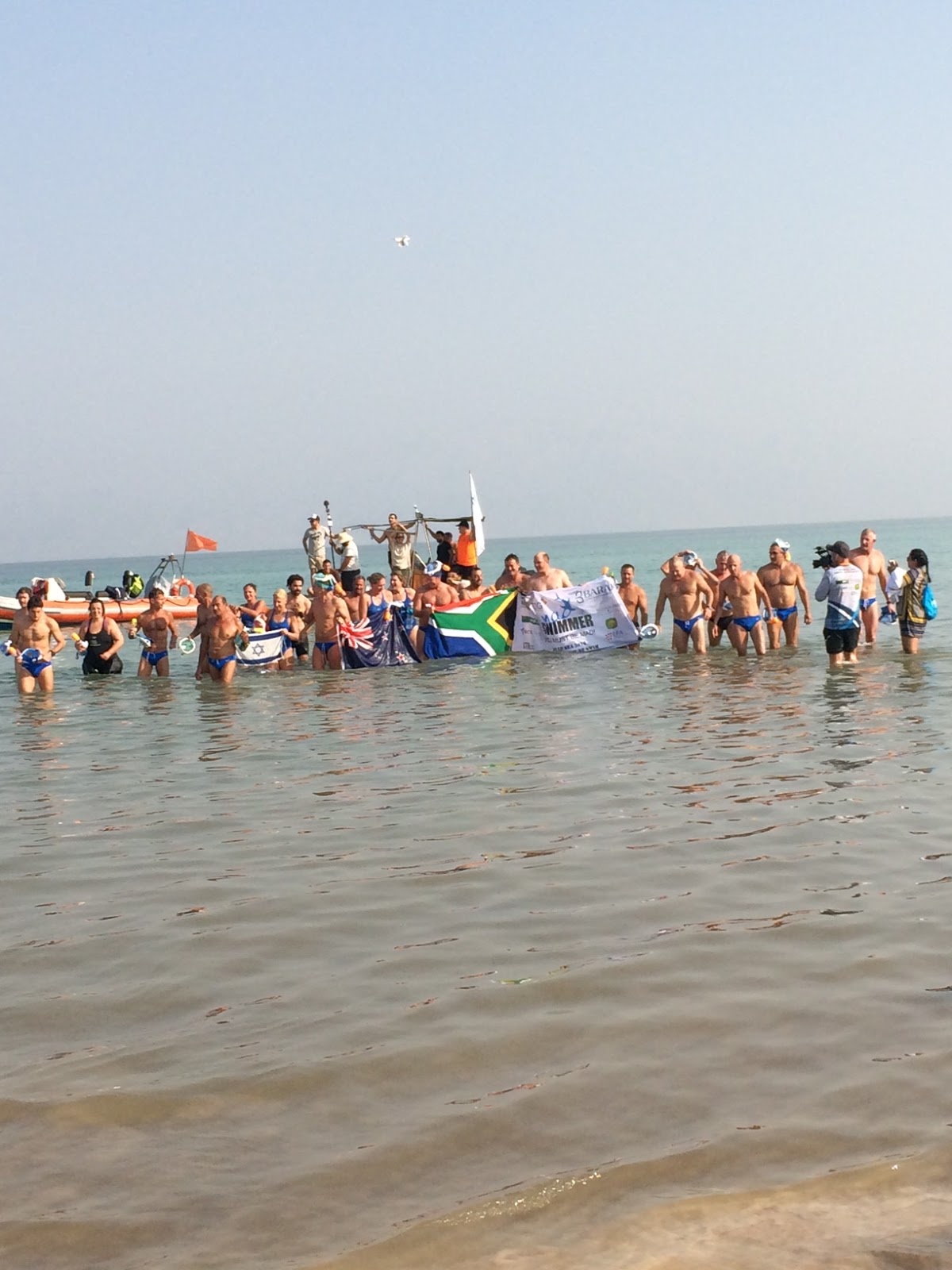 Lowest Swim In History Completed Across The Dead Sea

Courtesy of Nicolene Steynberg, Dead Sea between Jordan and Israel.

There are certain open water swims in history that will always stand out for their timing, uniqueness, and diplomacy, operations, and boldness. Solo swims like Lynne Cox‘s swim across th Bering Strait in 1987 or the massive international Bering Strait Relay in 2013 come to mind. But then there are also swims like Penny Palfrey swimming 40+ hours in the Cayman Islands or the Japan-to-Taiwan Ocean Swim Challenge in 2011.

Today’s Dead Sea Swim was one of those historically unique swims.

While being part of a global effort to save the Dead Sea, South Africa’s Madswimmer and their colleagues from Israel to New Zealand established a standard that literally cannot be beat. The group set off and completed a mass tandem swim that was the lowest marathon swim in history by swimming 16 km across the Dead Seat at 430 meters (1,411 feet) below sea level.

“In 2015, the Madswimmer broke Lewis Pugh’s highest open water swim on record when they swam at 5909 meters (19,386 feet) above sea level in the Andes Mountains,” reported Nicolene Steynberg. “Today’s Dead Sea swim was the successful completion of their High/Low Challenge.

“At 5 am this morning an international team of 28 men and women – including 10 swimmers participating under the auspices of Madswimmer – set sail on rubber duck boats from the Israeli shore at Ein Gedi to an identified delta across Jordanian borders in the Dead Sea. They started the 16 km tandem swim back to Israel. Weather conditions were perfect and all swimmers arrived back as one team on Israeli territory after 7 hours 9 minutes.”

This was the first group to attempt a Dead Sea crossing between Jordan and Israel – and they accomplished the feat despite and amidst extremely volatile and always dynamic political circumstances.

The Dead Sea Swim expanded to an international event when Madswimmer joined forces with EcoPeace Middle East and the Cyprus Israel Swimmers earlier this year. Swimmers from South Africa, Israel, Palestine, Denmark, New Zealand, Spain and England signed up for the swim with the specific aim to draw public attention to the depletion of the Dead Sea – and most of them without hesitation.

“The Dead Sea swim was no small feat. Its swim logistics were difficult and unprecedented for a swim of this distance. It was especially difficult due to the number of participants and its political challenges. Not only were the rescue and guide boats obtained from local owners and had to be trucked across the Judaean Desert to the Dead Sea, but the road held a huge risk for the massive earth sensitivities and sinkholes that exist in the area. As only one example of the obstacles that had to be resolved before the swimmers ever began their first stroke in the Dead Sea, the local geologists first had to work out a safe route.”

The swimmers had to face the significant risks when they entered the Dead Sea waters with its salt content 10 times that of the ocean where most of the participants had made names for themselves and cut their teeth on difficult aquatic adventures. “It was a difficult swim. Most swimmers complained of a burning skin after they finished. Only a few drops of water that could have inadvertently gone down their throats could have caused severe breathing problems so swimmers used a special facial mask for protection. Breathing with a full face mask was a sombre challenge in itself.

Being the lowest surface feature on Earth and a natural wonder rich in oxygen and minerals, protection of the Dead Sea is a worthy cause.

Industrialisation has led to the Dead Sea losing over 1 meter of water per year. The Dead Sea may disappear if society does not intervene. Levels have dropped more than 30 meters over the past 20 years; this in turn causes massive sinkholes which have swallowed roads, homes and farms. Ambassadors of the representing countries of all swimmers were invited to the event that was well attended by international media including CNN, Reuters, Associated Press, Discovery Channel and Richard Branson’s Virgin Unite.”

“We trust our swim has kicked off renewed global interest to help save the Dead Sea,” said Jean Craven, founder of Madswimmer that is a group of South Africans doing extreme swims to raise funds for children’s charities. Although Madswimmer agreed to share the awareness surrounding the depletion of the Dead Sea, all funds raised are committed to its South African children’s charities.

Additional articles on the Dead Sea Swim are here: 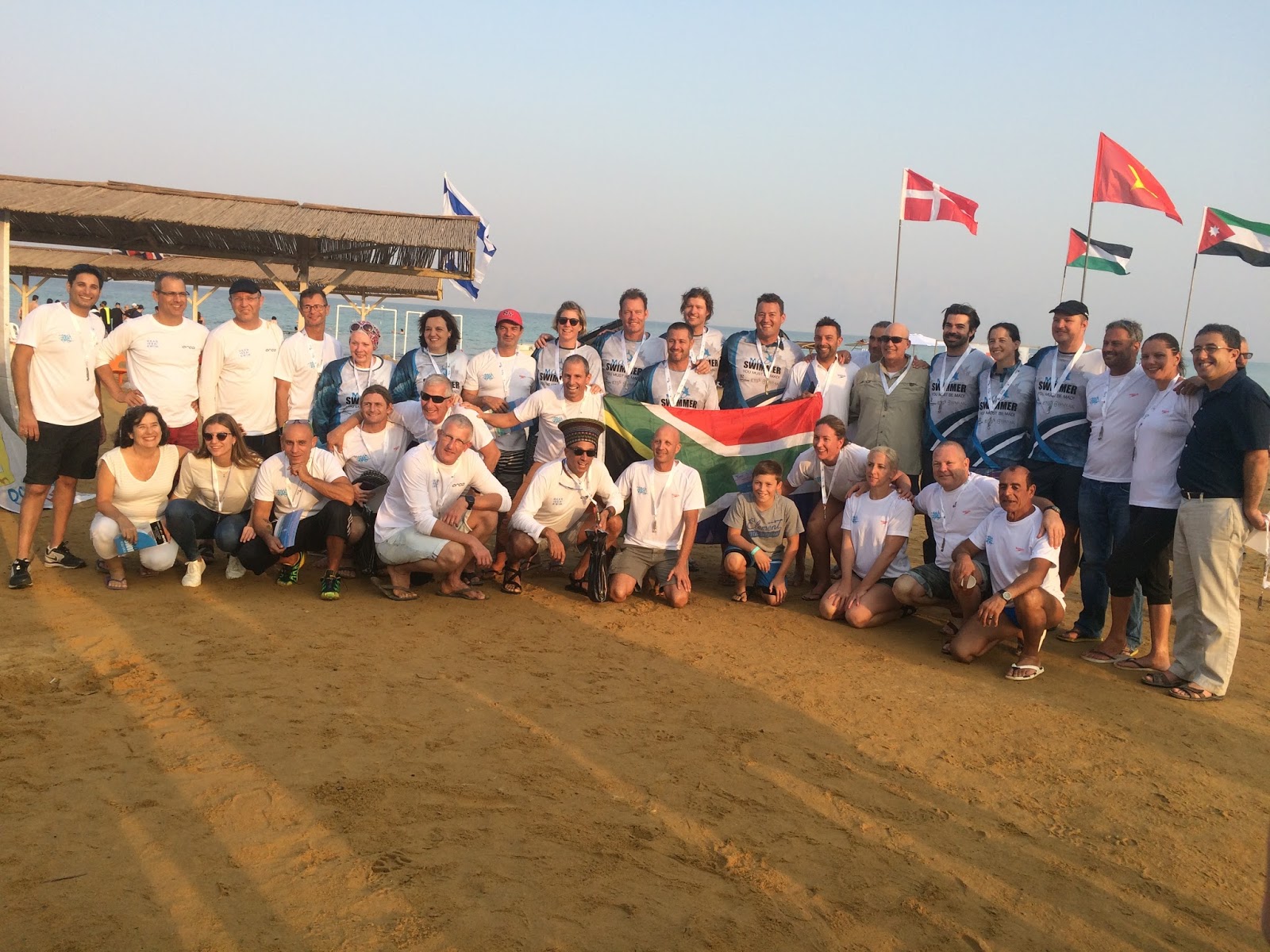