“I have never seen anyone pray so fervently and ask God for guidance and help as did Stephen Redmond before his Tsugaru Channel swim in 2010,” recalls Steven Munatones.

“He got down on his knees and prayed with every fiber in his body.”

“After three previous attempts at the Tsugaru Channel in northern Japan – none of which came remotely close to finishing – Stephen was at his wit’s end. With a growing number of doubters and his die-hard group of supporters wondering how his last and final attempt would end, Redmond asked for divine assistance. His road to the Oceans Seven had not been easy, and the end was torturously even more difficult.”

On all his previous attempts, the currents, eddies and tides in Japan had pushed him everywhere – left, right and backwards – but not straight towards his finish on Hokkaido. Round and round Redmond swam, but he had not yet even reached the halfway point across the 19.5 km turbulent channel in three tries.

“Psychologically, as he stood on the shores of Honshu before his attempts staring across the channel to his goal in Hokkaido, he looked like a beaten man with his shoulders slumped and his wide smile wiped from his face. But there was always a glimmer in his eye and a hint of hope in his voice. Stephen embodied the old saying, ‘Never say never.’“

While his mindset remained positive, he was not at his physiological peak. Redmond was most definitely not a fan of fish, seaweed and other marine edibles that were ubiquitous in Japanese meals. Instead of feasting on sushi and seaweed, Redmond existed solely on white bread and butter in the week leading up to his crossing.

The Tsugaru Channel was the last leg of his unprecedented completion of the Oceans Seven – and he was not about to quit so close to his goal.

Over the course of three long years, Redmond has already completed the English Channel (20 hours 1 minute in 2009 between England and France), North Channel (17 hours 17 minutes in 2010 between Scotland and Northern Ireland), Strait of Gibraltar (5 hours in 2011 between Spain and Morocco), Catalina Channel (12 hours 39 minutes in 2011 in Southern California), Cook Strait (12 hours 30 minutes in 2012 between New Zealand’s South and North Islands), Molokai Channel (22 hours 29 minutes in 2012 between Molokai and Oahu in Hawaii), but the three strikes against him in the Tsugaru Channel weighed heavily on his mind and his dwindling finances in the summer of 2012.

Finally, on his last day in Japan with his spirit nearly dashed and time literally running out, Redmond received a call from Captain Mizushima, his local escort pilot. While the two men could not speak each other’s language, they both understood the genuine passion they held in their hearts. “We can try one more time,” Captain Mizushima suggested to Redmond.

Redmond was already packed to head home to Ireland, but true to his nature, he was ready to give it one last shot.

12 hours 45 minutes later across a channel that seemed calmed by fortuitous divine intervention, Redmond swam from Honshu to Hokkaido and became the first person in history to achieve the Oceans Seven. He rightly so became a celebrity and inspiration to many overnight.*

         
The former rugby player and triathlete simply explained his stubbornness and achievement. “It’s not until you leave Ireland that you realise how important it is to be Irish. You tell an Irish person that they can’t do something and they’ll do everything they can to prove you wrong.” 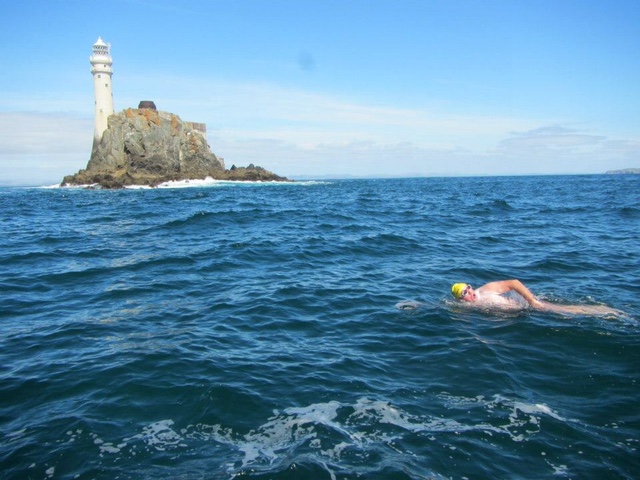 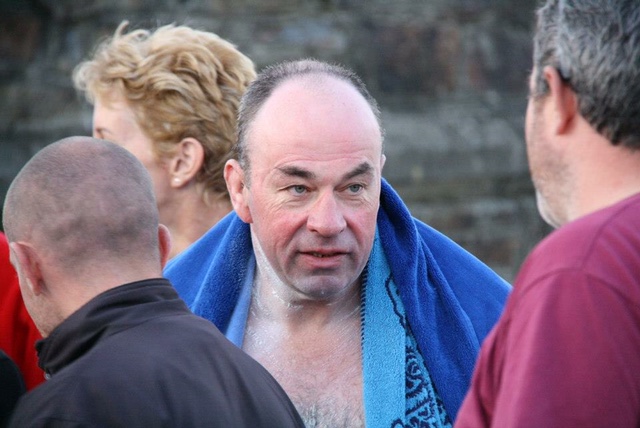 Redmond also attempted to swim 50 miles from Ireland to Wales in 2013 in a charity swim on behalf of the RNLI, and became the first person to swim around treacherous Fastnet Rock, a small island in the Atlantic Ocean and the most southerly point of Ireland, in 12 hours 28 minutes in 2012.

Redmond uses mantras of his children while tackling the channels around the world. “I use anything that gives me a mental edge. Marathon swimming is about as close as you can get to death while you are alive here on Earth. You lose all sense of perception while you are swimming in such difficult conditions,” said the Irish swimmer who typically traverses channels at a 48-52 strokes per minute pace.

“What you are trying to achieve is something very, very out there, but you know you can do it. It is a real test of the head and the body.”

* Redmond was the subject of the film Defeating Oceans Seven about his quest of the Oceans Seven, produced by Red Bull Media House.

“We will be forever touched by the courage and the depth of character that Stephen showed. He is almost mythical in a way, but he is a real-world hero. Stephen boiled down the essence of humanity and demonstrated how powerful dreams can be,” recalls Munatones about the documentary film. “His story of Defeating Oceans Seven is so compelling. His adventures around the world were riddled with defeats, saddled with pain. Nothing was never a given. But his ultimate triumph was beautifully captured by the crew of Red Bull Media House who produced this film. Their artistry with the cameras was nearly as magical to observe as was Stephen’s swim. Their studio was a rocking boat in the middle of a turbulent channel, constantly buffeted by winds and waves. As long as Stephen kept swimming, Wolfgang Merkel and his film crew kept rolling. They could not plan for conditions that always presented the unexpected.”