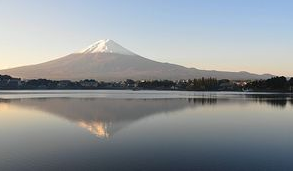 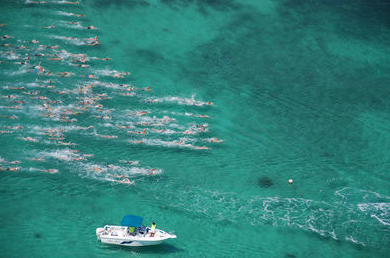 Blue Monday, typically the third Monday of January, is publicized to be the most depressing day of the year in the Northern Hemisphere.

This occasion led us to think about the exact opposite. Where and what are some of the most gorgeous, most moving, most awe-inspiring places to be in the open water swimming world?

The potential list can be innumerably large, is totally in the eye of the beholder, and incredibly varied. The list can include swims near Cape Adare in the Southern Ocean or in Lac d’Annecy in Haute-Savoie. France. It can be up on high (Lake Tahoe or Lago Titicaca) or down low (Dead Sea). It can include swims above tropical reefs in Fiji or along fjords in Scandinavia.

But these are 13 locations in some unique places around the open water swimming world:

1. Cap Gris-Nez on a clear day with Dover in the background

Standing on the shore in northern France watching individuals approach Cap Gris-Nez at the end of their English Channel swim is always a moving scene. As the swimmers struggle to clear the water over the rocky shoreline, the mix between human endeavor and nature’s beauty creates an unforgettable ambiance, especially with the white cliffs of Dover on the opposite English shore visible.

2. Start of the Flowers Sea Swim on Grand Cayman Island [shown above]

Over 800 swimmers line up perpendicularly to the white sands of Seven Mile Beach right before the start of the Flowers Sea Swim. From Olympians to disabled athletes, they eggbeater and wade in the shallow waters of the Caribbean Sea. With the deep hues of tropical blues and greens set off against billowy clouds and blue skies, the anticipation of all the swimmers sprinting in a straight line along the Cayman Island shoreline creates a magnificent setting.

3. Start of the Travessia dos Fortes on Copacabana Beach

With music blaring and tens of thousands of spectators along the course, over 4,000 swimmers make a mad dash for the finish at the opposite end of Copacabana Beach. The free-for-all start is like nothing else in the sport of open water swimming with the high-rise hotels and lush mountains of Rio de Janeiro in the background. As the packs of swimmers traverse over rolling ocean swells, surrounded by hundreds of support boats and safety personnel lining the course, the excitement is equal for both the first athlete in and the last person finishing.

Whether the race has been held in Beijing (Shunyi Olympic Rowing-Canoeing Park), London (Serpentine), or Rio de Janeiro (Copacabana Beach), the lead pack over the last kilometer always presents unknowns. Who will win an Olympic gold and who will finish just outside a podium position is watched by more people than any other open water races in the world.

5. Swim in the Five Lakes of Mount Fuji on a windless, sunny day in Japan [shown above]

With the snow-capped Mount Fuji rising majestically in the background, swimming in glassy conditions on any of the surrounding five lakes (Lake Kawaguchi, Lake Motosu, Lake Sai, Lake Shoji or Lake Yamanaka) is a surreal experience. As swimmers raise their head forward to sight, they can not only see the picturesque towns of the area and the peak of Mount Fuji 3,776 meters (12,389 feet) above, but also the reflection of the largest mountain of Japan on the water’s surface.

6. Swimming down the Hudson River alongside Manhattan Island in New York City

After hours of swimming – sometimes struggling – around Manhattan Island, swimmers enter the fast-moving waters of the Hudson River. They may be fatigued, but the river current is with them and they are swimming faster than they can walk and sometimes faster than they can jog while they breathe to their left they can see the skyscrapers of New York City and traverse under bridges. The solitude of their swim counterbalances in a unique way the hustle and bustle of Manhattan while their escort crews take in the impressive sights.

With nearly 18,000 swimming over the course of two massively busy days, fans, friends, spectators and media can look from the finish chutes to the start at the aQuellé Midmar Mile. Between these two points are thousands of swimmers of all ages, abilities and walks of life, each swimming with the differently colored swim caps of 8 separate heats. Like massive pods of dolphins playing along the surface of the water, the swimmers present an impressive sight amid the colorful announcements and music that creates an exciting atmosphere and ends in the largest post-race open water swimming expo on the planet.

8. Standing on the spectator pontoons under falling snow at the Ice Swimming Aqua Sphere World Championships in Wöhrsee, Burghausen, Germany

With freezing air temperatures and water temperature nearing 0°C, swimmers compete in the shadows of the longest castle in Europe. The ambiance at the Ice Swimming Aqua Sphere World Championships in Wöhrsee has to be seen to believed for swimming repeatedly in distances up to 1 km was previously thought to be medically impossible. But thoughtfully comprehensive descriptions of each swimmer, five separate saunas, and a packed house of spectators make this venue truly special and awe-inspiring.

9. Mid-channel at dawn before the Maui Channel Swim in Hawaii

Between three beautiful islands in Hawaii in the middle of the Pacific, relay swimmers and their escort crews can simultaneously see dolphins frolicking in the deep blue ocean, the towering volcanos on Maui, the pineapple island of Lanai, and the beautifully desolate island of Molokai on their way to and from the start of the Maui Channel Swim. With boats of myriad sizes and shapes stretched out over miles of ocean, each relay team celebrates the beauty and competitiveness of the 9.6-mile race together with the camaraderie of the participants and the challenges of a tough ocean crossing.

10. Midnight under a full moon in the midst of bioluminescence on a Catalina Channel crossing in Southern California

Starting near midnight on Santa Catalina Island on cloudless nights, 20.2 miles away from the closest point on the California coast, swimmers can see a sparkling line of bioluminescence on each of their arm strokes. Watching a mini fireworks display on each stroke, the swimmers are enamored by the unique sight of their arm movements causing such aquatic brilliance. As they stop for a feeding, they can also look forward to the lights of Los Angeles and above them to see a large moon like a spotlight on their channel crossing. The quiet solemnity of the crossing is a credit to the imagination and efforts of everyone involved in the Catalina Channel Swimming Federation.

11. Sitting on an escort boat coming in the finish at the Traversée internationale du lac St-Jean in Roberval, Québec, Canada

As one of the largest, richest and more prestigious marathon swimming competitions in the world, the swimmers and escort crews at the Traversée internationale du lac St-Jean are treated to a unique treat on the shores of Roberval on lac St-Jean. After an always tough crossing of the nearly circular lake, the knowledgeable crowds of Canadian swimming fans pour out their hearts and offer their hospitality to each and every swimmer who completes the crossing. Cheers can be heard from far off shore and culminate the moment that the swimmers reach the finish line. The appreciation and respect shown by the crowds vis-a-vis the swimmers is unique and heartfelt. Despite the utter exhaustion and fatigue faced by all who make the crossing, smiles always emerge from the swimmers, fans and escort crews alike.

As thousands of swimmers jump off the starting pontoon at the Bosphorus Cross-Continental Swim to cross the Istanbul Strait, swimmers dominate the waters that connect the Black Sea with the Sea of Marmara in Turkey. 364 days of the year, marine traffic is omnipresent on the Bosphorus, the world’s most narrow strait used for international navigation. But on race day, participants from dozens of countries and five continents are hailed by volunteers and spectators as they lay claim to swim between Asia and Europe.

13. Walking into the water in Cape Town looking at Table Mountain in South Africa

Whether it is on a Sunday training swim or on race day from Robben Island, the panoramic view of the Cape Town shoreline and its dominant Table Mountain is a scene that should be on every swimmers’ bucket list. The combination of cold, rough water under sunny skies in one of the world’s most beautiful cities is something that has to be experienced by those interested in unique aquatic adventures. The friendliness of the local swimmers only augments the dramatic landmark of the natural attraction of Cape Town’s geography.