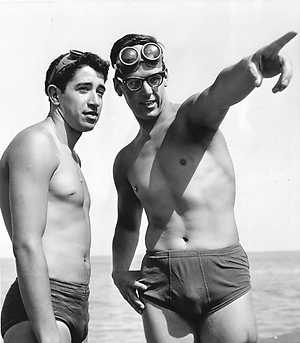 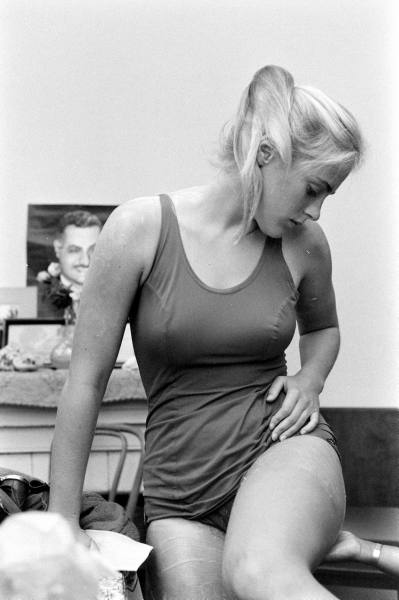 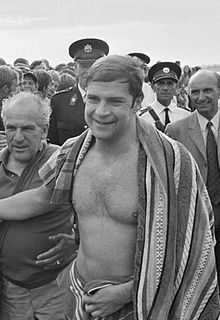 In August 1963, the World Professional Marathon Swimming Federation was founded in Roberval, Québec, Canada for the dual purposes of bring uniformity, safety and honesty to professional endurance swimming races and to serve as a depository of marathon swimming records and a source of publicity for the sport.

The founders were representatives of swimming races in Argentina, Canada, the United States and the United Arab Republic. It was agreed that membership would be held by the organizing committees of the races, each of which would pay annual dues and each of which would have one vote in the affairs of the Federation, plus one swimmer representative, who would be elected by the swimmers and would cast one vote on their behalf at Federation meetings in accordance with their expressed desires.

James P. Toomey, director of the Atlantic City Around the Island Swim (New Jersey, USA) race, was elected as the Federation’s first president, with Lois Fournier of Roberval’s Traversee international du Lac St-Jean as vice-president, and Joe Grossman of Atlantic City as Secretary-Treasurer. A constitution was written and the Federation was incorporated as a non-profit organization in the State of New Jersey, U.S.A. Race committees which became members were the Atlantic City Around the Island Swim, Traversee international du Lac St-Jean, Mar del Plata (Argentina) and Maratón Acuática Internacional Santa Fe – Coronda (Argentina) groups. In 1963, races were held at all four of those locations, plus races at Maratona del Golfo Capri-Napoli (Italy) and in the Suez Canal, U.A.R., both of which were affiliated with the International Long Distance Swimming Federation, and independent races at Chicoutimi (Québec, Canada), Chicago (Illinois, USA), Trois-Rivières (Québec, Canada) and Toronto (Ontario, Canada).

In 1964, at the annual meeting in Roberval, the constitution was adopted. Fournier was elected president; Carlos Larriera, a swimmer and organizer of the Maratón Acuática Internacional Santa Fe – Coronda race, as vice-president, and Grossman was re-elected as Secretary-Treasurer. The Federation voted to institute the annual practice of crowning male and female world champion marathon swimmers through a formula which scored each finisher in recognized international races on the basis of finishing positions, finishing times and distances of courses.

The year 1967 marked a turning point for the World Professional Marathon Swimming Federation. At its annual meeting held in Hamilton, Ontario, the Federation constitution was revised to make the organization a swimmers’ organization. Under the new constitution, adopted unanimously at the meeting, each member swimmer would henceforth have one vote; funds for the World Professional Marathon Swimming Federation activities would come from dues, and a category of associate (non-voting) members was instituted for coaches, trainers, race committee members, newspapermen and others interested in the sport. It was decided to establish standards (called guidelines) which set forth methods of attaining safety for swimmers in the water, complete integrity of races, and uniformity in races, and also sought to protect swimmers against exploitation by race committees. The Federation decided that henceforth, it would award its sanction to races which complied with the guidelines (or demonstrated they were making a sincere effort to comply with as many of them as possible under their particular circumstances). Sanction would be withheld from race committees which did not comply or attempt to comply with the guidelines. Sanctioned races would be considered by the World Professional Marathon Swimming Federation as International Championship events; those which did not receive the World Professional Marathon Swimming Federation sanction would be considered as local races and would not be included in the determinations of the world championships each year. It was agreed, however, that members would not be penalized for participating in non-sanctioned races except in special circumstances which had to be agreed upon beforehand.

Herman Willemse was elected president at the 1967 meeting; George Park of Canada as vice-president, and Grossman was re-elected as Secretary-Treasurer. In a resolution adopted unanimously, the Federation petitioned the International Olympic Committee to consider adding a marathon swimming event of at least five miles in future Olympic Games. Races sanctioned in 1967 were Capri, Chicoutimi, Hamilton, Roberval, Lac-Simon and La Tuque. Trois-Rivières was not, since its committee declined to communicate with the Federation. Only these seven races were staged in 1967. Horacio Iglesias of Argentina [shown above] and Miss De Nijs were crowned world champions for 1967.

In 1968, eight of the nine races held were sanctioned by the Federation: Capri, Chicoutimi, Hamilton, Roberval, Lac-Simon, Montreal, La Tuque and Narrgansett (USA). A local race in Melbourne, Australia was not sanctioned since there has been no advance notice to make it possible for international swimmers to compete there. At the annual meeting in Hamilton, Park was elected president, Travaglio became vice-president, and Grossman was re-elected Secretary-Treasurer. Labatt’ Ontario Breweries, Ltd. of Toronto, inaugurated the Labatt’s Trophy, emblematic of the world championships, on which names of all winners, back to 1963, were to be engraved and kept as a permanent exhibit, and individual cups were prepared for winners for 1963 to 1967, and presentations were made at a banquet in Hamilton in conjunction with the race there. The 1968 world champions were Abou Heif and Miss De Nijs. Thirty new swimmers and 14 associate members were enrolled during 1968, bringing swimmer membership to a total of 103 in 16 nations. The Swimming Hall of Fame elected Grossman to its Board of Directors.

Nine races were held in 1969, of which eight (Chicoutimi, Capri, La Tuque, Hamilton, Roberval, Montreal, Newport and Santa Fe (Argentina) were sanctioned. The ninth, Lac-Simon, was original awarded the World Professional Marathon Swimming Federation sanction, but its promoter later reduced his prizes below the accepted level of sanctioning. At the Hamilton annual meeting, it was unanimously agreed that if the prizes were not returned to the accepted level, Federation members would bypass that race and anyone who did swim in it would lose all championship points for 1969. By trickery, the promoter enticed 28 swimmers to Lac-Simon, but there announced he was NOT restoring his prizes to the accepted level and only 10 swimmers entered the race. All ten were stripped of their points (although none of the ten would have won the world championship in any case), as previously agreed at Hamilton. World champions for 1969 were Iglesias and Patti Thompson of Canada. Travaglio was elected president for 1971; Iglesias and Tom Hetzel (USA) were chosen vice-presidents, and Grossman was re-elected Secretary-Treasurer. Membership rose to 121 active and 14 associates by the end of 1969.

The promoter of the Lac-Simon race brought criminal charges of fraud against eight Federation members as a result of the problems at his race. In a hearing in Hull, Ontario in late October, the charges were dismissed and the promoter reprimanded by the judge for having brought the charges against the swimmers, whose innocence was proven beyond doubt by an attorney secured by the World Professional Marathon Swimming Federation. In December, member Greta Andersen announced she was donating an annual award to be given to the outstanding first-year woman swimmer. The 1969 winner of the Greta Andersen Trophy was Stella Taylor (USA).

In 1970, sanctioned races were held at Utrecht, Holland, Capri, La Tuque, Hamilton, Roberval, Rhode Island and Chicoutimi. Three non-sanctioned races were held in Argentina in January and February (arranged locally and with no opportunity to inform the membership they were to be held). At the annual meeting in Hamilton, a change in the manner of deciding the world champions was adopted. Instead of counting points for each swimmer in each sanctioned race he enters in a single year, it was decided that points for only a certain number of races would be counted, thus giving a more equitable opportunity for swimmers who cannot enter all or most races in a single year. It was agreed that the number of counted races would be one more than half those receiving sanction. Thus, for 1970, with seven races sanctioned, four top scores would be counted for each swimmer participating in more than four races. An eighth race was scheduled for Lebanon, but cancelled due to restrictions on swimming there as a result of a cholera epidemic in the Middle East. At the annual meeting, Iglesias was elected president for 1971, Régent Lacoursière (Canada) and Hetzel were chosen vice-presidents, and Grossman was re-elected Secretary-Treasurer. Membership rose to 132 active and 16 associates by the end of 1970. An award for the person having done outstanding work on behalf of marathon swimming was inaugurated in 1970 in the memories of two late World Professional Marathon Swimming Federation members, Irving Davids and Roger W. Wheeler. Grossman was named the first recipient. The Greta Andersen Award for 1970 went to Diana Nyad (USA) and world champions for the year were Johan Schans of Holland and Miss DeNijs.

Federation members voted unanimously to establish a Marathon Swimming Foundation and Marathon Swimming Hall of Fame. This project, which it is hoped will gain support from all branches of long-distance swimming, was formed to promote marathon swimming in all its forms – solos and races, amateur and professional – and to honor outstanding swimmers and contributors to the sport throughout its history. A panel of selectors (Commander Gerald Forsberg of England, Buck Dawson of the International Swimming Hall of Fame in Florida, and Grossman) named “classes” of six electees for each year from 1963 (when the World Professional Marathon Swimming Federation began to collect historical data on the sport) through 1970. The electees were named in May.

Only four sanctioned races were held in 1972: the 19th annual 18-mile Maratona del Golfo Capri-Napoli, the 25-mile Traversée internationale du lac St-Jean, and two team events. One of the latter was the annual 24-hour race at La Tuque. The second was a new twist given the annual Saguenay River races between Chicoutimi and Bagotville, Quebec. For the first time, the 28-mile race was made a team event, and two-swimmer teams split the swimming chores. A fifth professional race as held in Egypt – the first Arab Nile Marathon – but this 21-mile event was not sanctioned as entry was restricted to Middle Eastern swimmers. The titles of men’s and women’s world champion marathon swimmer were won, respectively, by Horacio Iglesias of Argentina and Shadia El Rageb of Egypt, both of whom successfully defended their crowns. Election of officers for 1973 were held (by mail) in December, with ballots not to be counted until January 1, 1973. The World Professional Marathon Swimming Federation continued to support the Marathon Swimming Foundation and Hall of Fame and worked throughout the year to broaden its base among other organization – amateur and professional – within the sport. 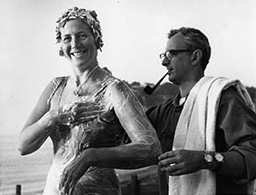 Grossman is shown applying Channel grease to Greta Andersen before entering the English Channel [shown above].