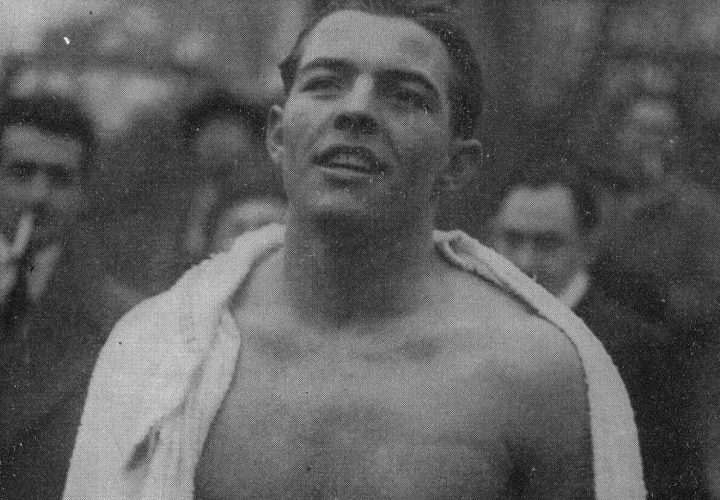 It is one thing for a swimmer to win races and set records, but it is a completely different achievement to save lives in desperate situations.

Those feats are exactly what Georges-Urbain Vallerey, Jr., a French recipient of the Croix de Guerre and an Olympic medal, did.

Vallerey was recently honored in the International Swimming Hall of Fame Class of 2017 in the Pioneer category. The Pioneer Category of Honoree Selection was established to recognize individuals whose careers were interrupted by war or politics, or whose great accomplishments or inspirational stories have been overlooked in the fog of time.

Vallerey was one of the world’s most famous swimmers of the 1940s with a great swimming pedigree and great genes. His father, Georges swam in the Paris Olympic Games and his six children were all world-class competitive swimmers.

At the age of eleven, he made his first save of a young girl in the water. But his heroism as a lifesaver occurred in November 1942.

In the midst of World War II, France and Germany agreed that Morocco was a neutral territory. The Allies saw this neutrality as aiding the Nazis and hoped to convince the French naval fleet, stationed in the harbor of Casablanca, to join them as a show of strength. The naval battle of Casablanca started as 15-year-old Vallerey and 29-year-old friend Robert Guenet were on shore.

The French ships were outgunned by the American fleet and several French vessels retreated into the harbor while under attack, hoping to avoid being sunk at sea. Vallerey and Guenet saw a ship 300 meters from shore being hit by high-explosive shells. Many sailors did not know how to swim and the pair jumped into the water to save them despite bullets, shells, and burning oil. Each rescued a sailor, returned to the beach with them, and immediately swam back to the burning wreck. The bombing continued but they didn’t stop.

Vallerey then stepped up his bravery and further utilized his aquatic skills.

He found a boat on the beach, tied a rope around his waist, and swam it out to the ship, saving even more seamen.

In 1943, Vallerey and Guenet were decorated with the Croix de Guerre avec Etoile de Bronze (War Cross with Bronze Star).

He later set a world record with Alfred Nakache and Alexandre Jany for the 300m medley relay and by 1947 was the best French swimmer in the 200 breaststroke, 100m and 200m backstroke, and 400m freestyle. At the 1948 London Olympic Games, he won the bronze medal in the 100m backstroke. In 1949, Allen Stack, the 1948 100m backstroke Olympic champion, asked Vallerey to race him in Casablanca where Vallerey won the race in a time faster than Stack’s winning time in London.

In his memory, the Les Tourelles Piscine, where the swimming events of the 1924 Olympic Games were held, was renamed piscine Georges-Vallerey. Today the pool has been renovated and is one of the great pools of the world – a lasting tribute to a great swimmer and selflss lifesaving hero.