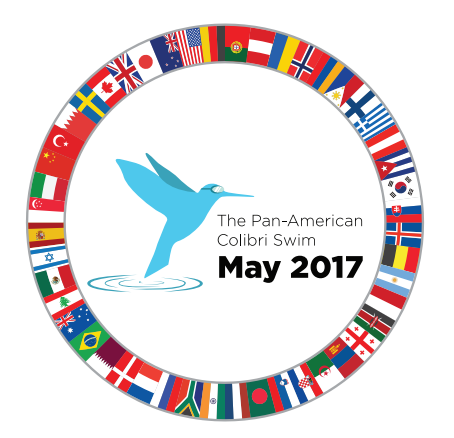 The Pan-American Colibrí Swim is a cross-border swim by a group of ocean swimmers and kayakers from five nations whose purpose to raise awareness and funds for the Colibrí Center for Human Rights. “The Colibrí Center for Human Rights serves to alleviate the suffering of individuals whose family members have died while crossing the USA-Mexican border,” explains Colibrí swim ambassador Kimberley Chambers.

“We hope to enable the Colibrí Center for Human Rights to continue its work on a larger scale and to inspire people from all walks of life to understand, appreciate and attempt to resolve political, cultural and social differences that may separate them from others.”

The Pan-American Colibrí swimmers includes accomplished swimmers from New Zealand, South Africa, Israel, Mexico and the USA who have completed a number of cross-border swims: in the English Channel between England and France, across the North Channel between Scotland and Northern Ireland, in the Dead Sea between Israel and Jordan, across the Mediterranean Sea between Cyprus and Israel, in Lake Memphremagog between the USA and Canada, and across the Strait of Gibraltar between Spain and Morocco). The swim’s two ambassadors, Chambers from San Francisco and Antonio Argüelles are among many of the accomplished open water swimmers in the group.

Chambers has completed the Oceans Seven and Argüelles is one swim away from accomplishing the same in addition to have twice completed the Triple Crown of Open Water Swimming. Several others have been part of international Speedo diplomacy swims like the Dead Sea Swim and unprecedented swims like South Africa’s Madswimmer group completing the highest altitude open water swim in history (on Mount Ojos del Salado in Chile at 6,400 meters) and the Cyprus Israel Relay Team that swam for five days between Cyprus and Israel.

The swimmers and their escort flotilla will swim 10 km from Imperial Beach south of San Diego, California, across the USA – Mexican maritime border in the Pacific Ocean, to Tijuana, Mexico. They will depart from Imperial Beach in the morning at 8:30 am, unfurl an event banner at the United States-Mexican border during the swim while treading water in the sea, and plan to arrive on the shores of Playas de Tijuana, located just south of the Mexican border at 12:30 pm where they will be greeted by Mexican authorities and members of the community.

“We will enter on the south side of the Imperial Beach Pier, swim out past the surf, and head south guided by escort boats and kayakers until we reach shore in Tijuana, Mexico south of the USA-Mexican border. We hope to bring people from various countries together as ambassadors of goodwill to express our deepest concern in a way we know best – swimming. Ignoring human suffering is something that those of us in privileged societies should not allow,” described Chambers. “Today, more than ever before, the Pan-American Colibrí swimmers believe the Pacific ocean is a great venue to demonstrate how water can unite people from all walks of life, despite different beliefs and perspectives.”

With the political differences in America often in the news and in the minds of many Americans of all political beliefs from conservative to liberal, Chambers is adamant that the swim is not a protest or demonstration against the proposed border wall that President Trump and his administration is set on building. “It is not a protest. Above anything else, the swimmers want to raise funds and awareness for the Colibrí Center for Human Rights and help alleviate the suffering of individuals whose family members have died in the desert that exists between northern Mexico and the American Southwest.”

The two ambassadors – Chambers and Argüelles – are well-positioned to understand the issue of immigration that is the root of the ongoing debate in America centered on President Trump‘s border wall between Mexico and the United States.

Chambers is a native of New Zealand who now lives and works in San Francisco. After growing up on a farm in rural New Zealand, she graduated from the University of California Berkeley and has been working in Silicon Valley for years while becoming the sixth person in history to complete the Oceans Seven and the first woman to swim 30 miles from the Farallon Islands to San Francisco. Her first act of international Speedo Diplomacy was last year when she joined the Madswimmer of South Africa and the Cyprus Israel Relay Team to complete the cross-border Dead Sea Swim, an unprecedented cross-border swim as her introduction to Speedo diplomacy.

Argüelles is a native of Mexico who graduated from Stanford University in California. The Mexico City native is a highly successful bilingual entrepreneur from Mexico City who has achieved wide-ranging success in the fields of education, technology and aquatics and spent his childhood growing up in the home of his foster father Bill Lee, who at the time was the President of Speedo International. “Bill believed in casting politics aside by bringing the world together through the power of sport. In the 1970s and 1980s, when the world was divided in two – the Free World and the communist nations – I had the unique opportunity to interact with swimmers and water polo athletes who Bill fostered from both regions.”

“We hope to enable the Colibrí Center for Human Rights to continue its work on a larger scale and to inspire swimmers from all walks of life to understand, appreciate and attempt to resolve political, cultural, social differences that may separate them from others,” says Chamber.

To donate or volunteer for the Colibrí Center for Human Rights, visit here. For more information, visit the event website.