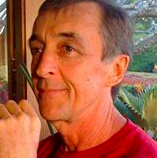 Can a person with a fear of cold water ever swim in it? Even getting a blast of cold water while in the shower is a major problem for me.

I regularly got a taste of this by living in an overpopulated house with an under-powered hot water system. All it took was someone turning on a tap in the kitchen while I was showering to turn my happy singing into a scream. Through experience, my fear of cold water is not completely unfounded.

Recently, I found myself quite torn between the fact I did not like cold water and a rising interest in reading about ocean swimmers who tackle this wet, freezing medium.

Eventually, I decided to literally take the plunge and try this experience for myself.

On a pleasant winter afternoon, I went to the beach, stripped down to my bathers and walked towards the ocean. It was quite calm with a few gentle waves rolling in. How bad could this be?

My feet were the first to send the message, “This water is cold.” I slowly moved deeper until the water was above my knees. It was at this point when my mind and body began a power struggle. My mind was saying, “Keep going, keep going” whereas by body was saying, “Stop, stop, abort.” It added, “It’s okay for you head stuck all the way up there and out of the water.”

With the help of a few small, unfriendly waves, I was wet up to my shoulders. My actions while being immersed this deep consisted mostly of me breathing erratically in and out very quickly, all the while rapidly moving my arms in an odd, frantic back and forward motion. At this point, my head was still clear of the water, and I was not doing anything that could be recognized as swimming.

The water flattened out for a moment, and I made an attempt at swimming. Up until this point in my life, I was totally unaware that you could experience “brain freeze” by any other means than eating an ice cream. Well, being honest was more of a mild, too cold drink, type pain and it stopped as soon as I raised my head out of the water.

As a small wave came up, I noticed a couple of people on the beach looking in my direction. To look like I was having fun, and to keep my head out of the water, I tried to catch the wave. This was moderately successful, so I walked back out to catch another. To let them know I was okay, I swam back a forth a couple of times along the beach, sometimes even with my head in the water.

Due to some shivering, it was clear it was time to get out of the water. Unfortunately, the people on the beach were still there, watching…

I tried to stride confidently out of the ocean and past them like I do it all the time. “Looks a bit cold buddy,” he said using the obvious to break the ice. “Nah, Bloody freezing,” I said with the slight sense of superiority you get when you know you have done something that not many others attempt.

There were two things I got from this cold-water experience. The first was that afterward I felt surprisingly invigorated. It was a challenge that had been thrown down that I had met. The second was that I never knew a hot shower could feel so good.

I live in the sub-tropics and we don’t do cold. The water temperature was 17°C which I estimate is equal to about 7°C if you live in a colder country.